'What happens to your body and mind when you swim in the sea at minus 3 degrees Celsius,' a person who swims in the Antarctic waters Louis Pew is working to swim in the world's oceans to appeal to problems such as the melting of polar ice due to climate change and changes in ecosystems. The person who received it. Mr. Pew reports on the experience of swimming in the minus 3 ℃ sea in the Antarctic .

What it feels like to swim in sub-zero waters | 1843
https://www.1843magazine.com/travel/taste-the-fear/what-it-feels-like-to-swim-in-subzero-waters

In November 2017, Puy challenged a 1km long swim near British South Georgia in the South Pacific.

South Georgia is located below. It is a habitat for elephant seals, fur seals, and penguins, with an average temperature below 0 ° C from April to November.

Pyu started with physical modifications to challenge swimming on South Georgia. Because fat and muscle are excellent insulation materials, they trained to a body like a heavyweight wrestler. In the week prior to the challenge, he “habituated” the seawater around the Falkland Islands at a water temperature of about 6 ° C, accustomed to cold water.

On the day of the event, Pew first checked the surroundings by kayaking, and confirmed the swimming route and the location of wild animals. Pew-san only wore Speedo swimsuits and caps for goggles. In swimming in the cold, there is a method of applying oil such as petroleum jelly to the body to keep the heat of the body, but because the smell of oil may threaten large carnivorous animals such as killer whales and seals, Pu's skin I didn't add anything.

The coolness of the water felt by Pew who jumped into the sea below freezing point is expressed as “burned on fire”. However, the real danger in water at minus 3 degrees Celsius is to drown rather than freeze death. Within 5 seconds of entering the water, your body will be in shock and begin to have difficulty breathing. “The only thing that I thought of after I started swimming was to count the number of strokes, like“ 1, 2, breath, 3, 4, breath, ”. The coldness of the water below freezing point stiffens the muscles and shakes the entire body, 'It becomes more and more difficult to put water and put your arms forward.' 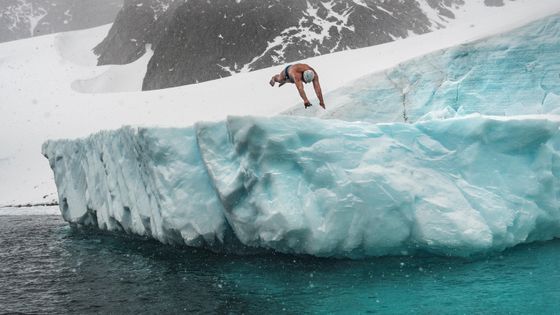 The last 150m before swimming, Pu's view said he found a group of elephant seals sunbathing on the beach. The elephant seal is a large carnivorous animal with a total length of 6.5m and a weight of up to 5 tons. It is dull on land, but can swim powerfully and smoothly in the water.

It seems that the companion who was standing by kayak for safety had discovered one elephant seal below Pew, but the companion was because `` fear transmitted to Pew swimming '' He said he was trying to keep calm. Pu's body, which has finished swimming 1km, is 'bright purple', and he sees blood vessels pulsing, and his tongue is frozen and he cannot speak. If you leave yourself in cold water for a long time, your body temperature will continue to drop even after you get out of the water. The reason for this is to maintain vital activity, after blood has flowed into vital organs, then passed through the cold limbs before returning to the heart.

Pu has been swimming in the Arctic Ocean and glacial lakes at an altitude of 5300m to appeal for the protection of marine resources. When Pu began this activity, only 2% of islands such as the Falkland Islands and South Georgia were protected from overfishing to destroy the ecosystem. According to Pugh, 23% is now protected from overfishing, but Pew says, “Conversely, 77% are not protected.”

You can watch TED's experiences when Pu's swims in the Arctic Ocean and the Everest Glacier Lake at an altitude of 5600m.