'Do not wash chicken with water,' experts warn Researchers from the US Department of Agriculture (USDA) and North Carolina State University published a research report on food washing dated 20 August 2019. Among them, the alarm sounded based on the data obtained from the experiment, ' Raw chicken should not be washed with water before cooking '. 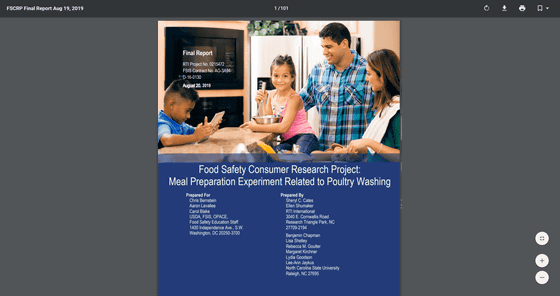 Experts Are Warning People Not to Wash Their Chicken.Here's Why It's So Dangerous

Raw chicken can be contaminated with bacteria that cause food poisoning, such as Campylobacter , Salmonella, and Clostridium perfringens . According to the Ministry of Health, Labor and Welfare's (PDF file) 2018 Food Poisoning Occurrence Status (Summary Version) and Major Food Poisoning Incidents, out of 1,330 food poisoning incidents in 2018, food poisoning by Campylobacter accounted for 24.0% of all cases, Clostridium perfringens According to the company, 2.4% are based on salmonella and 1.4% are based on Salmonella. In particular, the number of incidents of Campylobacter is third after Anisakis and Norovirus . The research team recruited 300 subjects and prepared a meal containing chicken thighs and salad in the North Carolina State University test kitchen. The subjects were divided into two groups and one group was informed by email how to cook chicken safely, but the other group was not given any information.

All subjects admitted that they had washed chicken in the past, saying that `` because chicken is washed before cooking '', `` to remove chicken meat '', `` because the family did so '' It seems. Therefore, the researchers attached 'harmless and traceable E. coli' to the chicken used in the experiment and cooked it while hiding the fact from the subjects.

The following image shows the sink after washing the chicken. The left image was taken under normal light and appears to be clean. However, if you look at the right image taken under special light, you can see that a lot of dirt is attached around the sink due to splashed water from the chicken. On the other hand, researchers predicted that E.coli was detected in 20% of salads without having to wash the chicken before cooking, because the researchers predicted that 'participants did not wash their hands and utensils correctly'. USDA argues that the following points should be noted for hygienic cooking.
・ After handling fruits and vegetables, you should cook meat at the end.
・ You should use a cutting board exclusively for raw meat.
• Raw meat should not be washed.
• After touching raw meat, wash your hands with soap for at least 20 seconds before touching other foods.
• Use a food thermometer to ensure that the chicken is well heated at least 73 ° C before eating.

Carmen Rottenberg, director of USDA's food safety inspection service, said, 'Washing or rinsing raw meat or chicken with water can increase the risk of food poisoning because germs spread around the kitchen. There is a warning. “Also, if you do not wash your hands for 20 seconds immediately after handling raw food with your bare hands, you could increase the risk of food poisoning as well.”