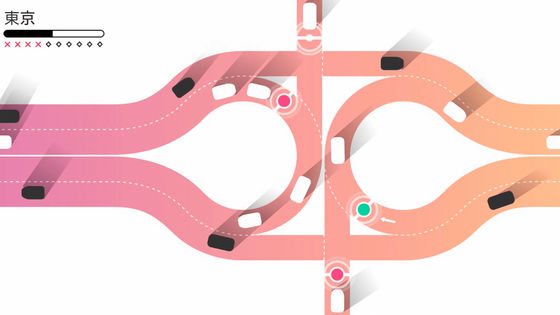 Many cities run in a row in large cities, so at traffic-intensive intersections traffic lights provide very complex traffic control. If a person takes on the role of such a signal, ' Traffix ' is a game where you can experience how difficult it is. Traffix is provided with apps for iOS and Android, and the PC version is also distributed on Steam, so I immediately played and experienced the benefits of the traffic lights.

This time we will play Traffix, an iOS app version. Access the App Store page from the above URL and tap the red frame part. The app costs 480 yen for a fee. There is no need to charge for it, as it is a fully sold type application.

When the installation of the app is complete, tap 'Open'.

Then the app starts. Tap the button in the red frame to play the game.

You can play Traffix in its initial state with 'Tutorial' and the lowest difficulty 'Berlin' stage. First select the tutorial and tap 'Play'.

The game screen is as follows, and the lane is drawn colorfully on a white background, and the car (red frame part) runs on it.

The red circle on the lane is the traffic light and the car stops here. When the user taps the signal, only one car passes through the signal.

If you proceed without accident, a green check mark will be displayed on the car as follows. The goal of being clear is set if multiple cars are advanced to avoid accidents in each stage, and it is clear stage if safely sending about '40 to 80' cars.

If multiple cars are in a row, double tap the signal.

Then, the signal changes from red to green. When the signal is green, it is natural but the car will run through without stopping.

The green signal can be turned back to red by tapping again.

If left as it is, the icon on the car changes into an angry face.

Then it will be counted as an accident. If the number of accidents is 10 before the stage clear condition is met, the game is over.

Since there are two types of vehicles running on the road, “white cars that traffic can be controlled by traffic lights” and “black cars that run freely without being affected by traffic lights”, white cars become black cars. You need to manage the signal so that it does not collide. If an accident occurs, the exclamation marks will be displayed on the car as shown below, so these must be deleted by tapping or swiping. If you leave an accidented car as it is, it will cause a further rear-end collision, so be careful.

So, if you send the default number of cars successfully, the tutorial is clear. All you have to do is play each stage.

The first thing you can play is a general crossroad where the German city Berlin is the stage name. It's the first stage, so it's a good level of difficulty for shoulder break-in.


You need to manage roundabouts in Rome, Italy.

In Jakarta, the capital city of Indonesia, we skillfully manage roads with merging from both left and right lanes.

Shanghai has a large X-shaped intersection, one for upper and one for lower.

Moscow will control the traffic that joins the orthodox two upper and lower lanes from two locations. The point is that the running lane is just blindfolded so that it crosses the upper and lower two lanes vertically, and a car crash often occurs.

In Dublin, the capital of Ireland, we control a two lane road that runs along the track and the lanes that join it.

It's like this when I actually play it. It may seem like an intersection that seems to be everywhere, but if you try to play it, you can realize the greatness of the signal because the accident occurs and the brain suddenly gets confused when you make a few mistakes.


A roundabout that exists in Cairo, the capital of Egypt.

Succeeded in clearing for the first time with no misses. Then, 'Unlock chaotic mode' is displayed, so tap this.

According to the explanation, the chaos mode is the mode full of police police cars. It seems that the mode with higher difficulty is released when cleared with no miss.

Managing the intersection of Cairo in chaos mode is as follows. Apparently chaos mode seems to be a mode where the frustration degree of the car waiting for the signal is not displayed. However, other than that, no big difference was felt.


Australia-Sydney is an intersection where roads cross the U-shaped road vertically.

Havana, the capital of Cuba, is a road that passes through the runway of the plane. It looks pretty simple, but it's pretty difficult to play.

Auckland in New Zealand seems to have made the Havana stage more difficult.

Small roundabout in Barcelona, Spain. Because the diameter is small, if the distance between the vehicles is too close, it will touch at the time of curve.

Budapest, the capital of Hungary, is a crossroad where two tracks meet.

There is also a stage called Tokyo. It looks quite complicated on the stage as if it made New Delhi even harder, but finding a law for control makes it relatively easy to manage.


If you actually play it, you can realize how smooth traffic control is being performed by switching simple-looking signals. It can be played like a normal puzzle game, you can fully rotate the brain and clear the signal by tapping force, or find out the regularity on the intersection and operate the signal mechanically to clear it. It is a game where you can enjoy various ways of playing more than you think.

However, it is a problem that you can play at any time except for the stage that you cleared once, because it is a system where the next new stage is released each time you clear one stage.