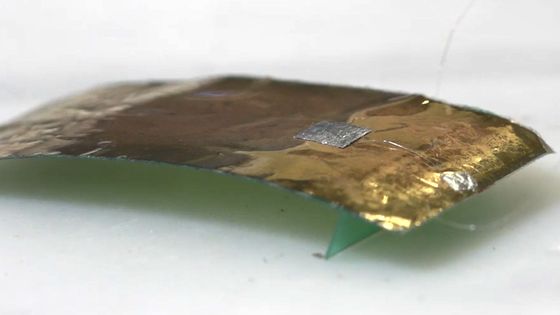 Speaking of roaches, they have incredible vitality, and trouble getting into the house through small gaps. A thin robot with durability and maneuverability like that of a cockroach has been developed, and a movie of actually moving it has also been released.

A team of researchers from the University of California at Berkeley and Tsinghua-UC Berkeley Shenzhen Academy has developed a new insect-sized thin robot. The robot is about the size of a stamp and is made of thin sheets of piezoelectric material called polyvinylidene fluoride (PVDF) .

Piezoelectric materials are characterized by the fact that the material expands or contracts when a voltage is applied. Therefore, this robot, which is covered with stretchable polymer as a whole, also stretches the entire sheet when a voltage is applied. The research team has developed a robot that bounces small and moves forward as it expands and contracts by attaching 'feet' to the PVDF sheet.

You can see how the robot actually developed by the research team moves in the following movie.

This robot has some eerie similarities to cockroaches-YouTube


It is a robot developed by a research team at the University of California that moves with you on the ground. It looks like a thin sheet connected to a thin wire. 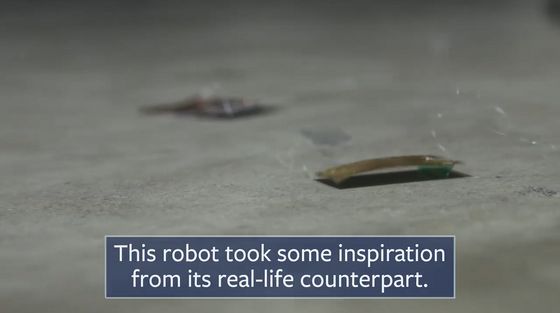 People's shoes appear from above ... 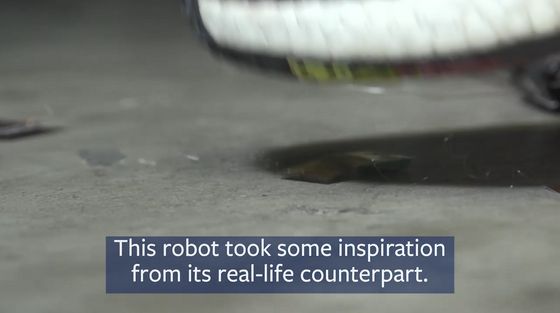 I have knocked down a robot. However, it is said that this robot has a level of durability that is safe to be crushed by human beings. 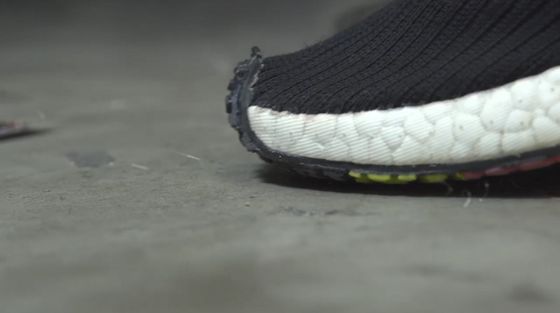 Next is a robot that moves on the weight scale. 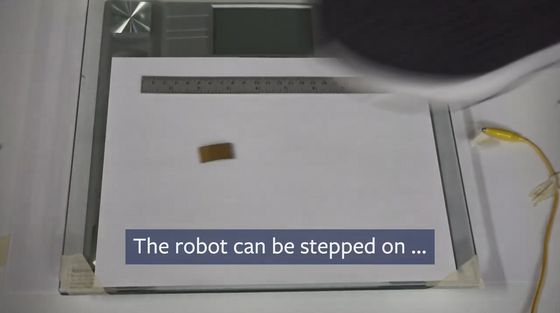 In addition, a person knocks down. 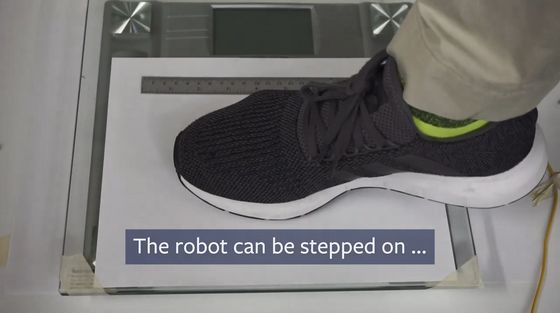 If you put on the weight as it is, the scale panel will display 59.5 kg. The weight of one adult is on the robot. 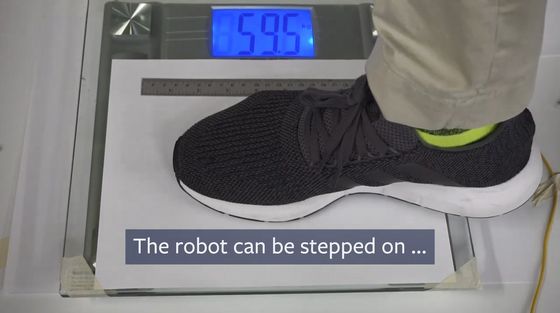 When men release their feet ... 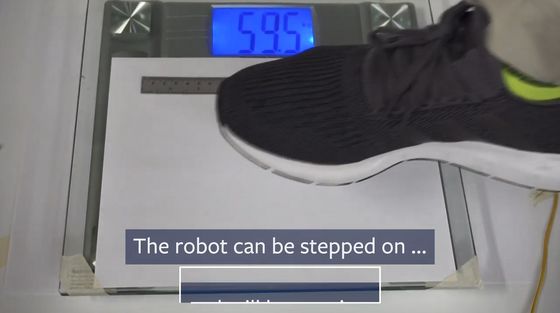 The robot did not break and started moving forward again. Although the robot itself weighs only 20 to 65 mg, it can bear the load of 60 kg, which is one million times the weight. 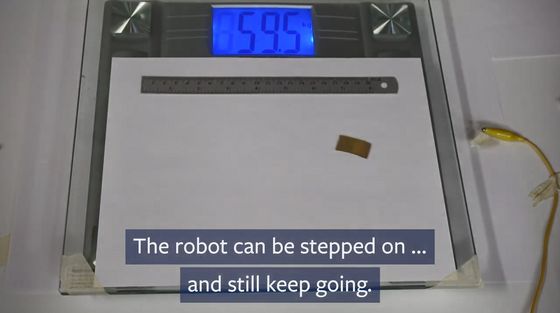 Also, if you place the robot in a narrow test tube and apply voltage ... 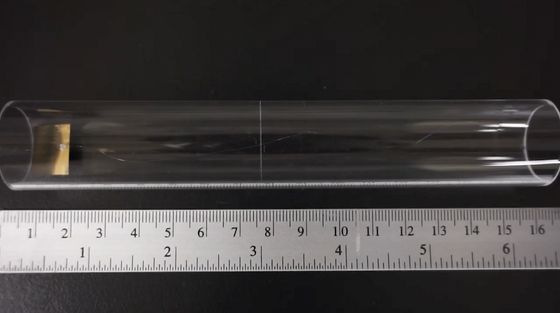 I moved forward at a speed that was a bit spooky. The robot can travel up to 20 times the maximum distance per second. 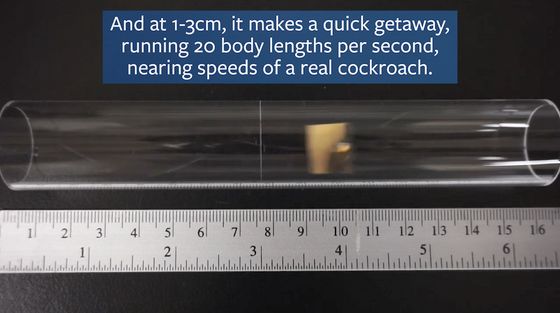 In addition, although it is slower to move forward, you can move with peanuts that are six times as heavy as you. 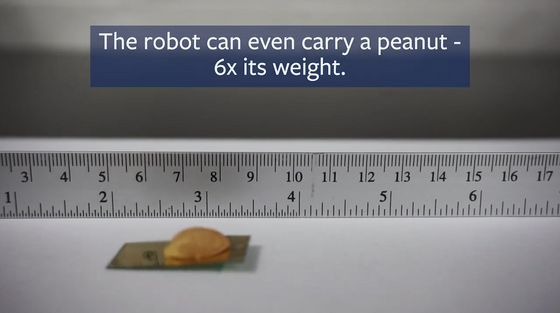 Looking at how the robot moves from the side, it can be seen that the expansion and contraction of the entire seat is converted into forward energy by the presence of the two 'foot parts' placed at the bottom. 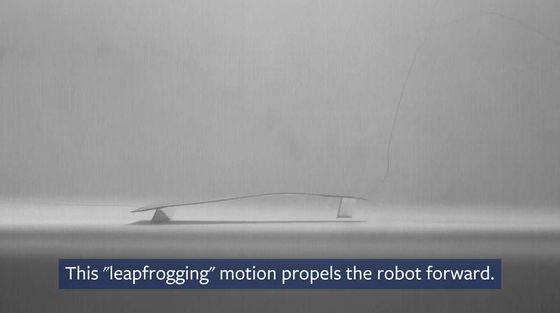 Also, if you make the way with test tubes, you can also climb slopes. 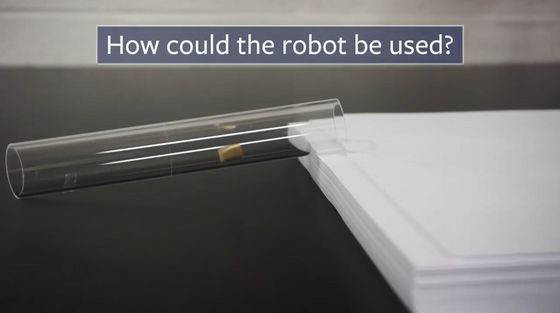 The research team claims that such a small, durable and highly mobile robot is useful for casualty search and rescue operations in the event of a disaster. There are many possibilities, such as being sent to a dangerous place where people and disaster relief dogs enter and having them search inside.

At the time of writing, thin wires are connected to apply voltage to the robot, but the research team continues to try to mount the battery so that the robot can be driven independently. In addition, by providing a sensor that detects gas, you can also check if there is any dangerous gas accumulated in the infiltrated area. 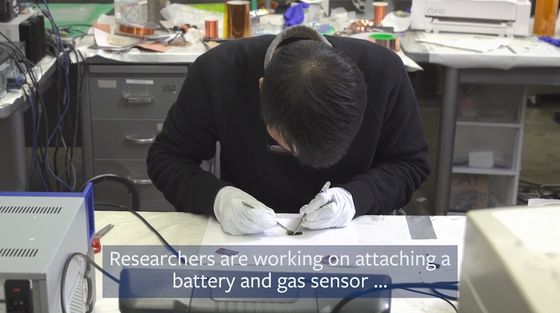 Liwei Lin, a mechanical engineering professor at the University of California at Berkeley, said, 'Many small sized robots are very fragile and will break if people step on them.' 'The newly developed robots are extremely robust It will continue to function even if a human step on it, ”commented. The research team said that they would continue to make improvements so that they could move around even if there were obstacles.