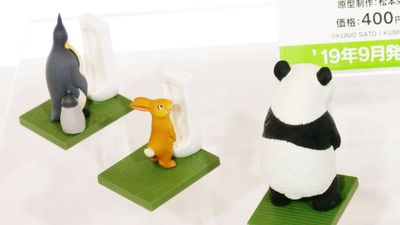 Wonder Festival 2019 [Summer] exhibits not only figures based on manga and animation, characters and monsters that appear in movies, but also figures of cute and humorous animals. At the Kaiyodo booth, which deals with the planning and production of figure designs , figures based on the “animals with companions” drawn by popular illustrator Kunio Sato , Ukiyo-e painters of the late Edo period, Kuniyoshi Utagawa and Bakumatsu Ukiyo-e figure who played an active part from the period of the Meiji period, the figure based on the Ukiyo-e of Kawanabe Zensai was displayed.

At the Kaiyodo booth, there are five types of 'Ts〇o o 〇 2' that appeared in the miniature figure brand ' Capsule Q ' for capsule sales. The animals with humorous companions drawn by Mr. Sato have been figured out with Kaiyodo quality. The penguins, rabbits, pandas, hippos, cats, and frogs (two cats and frogs are set) are accompanied by Zurari. Prototype work is Mr. Eiichiro Matsumoto . 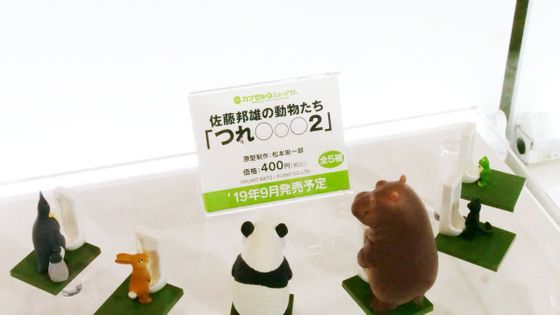 The appearance that animals are taking a ride is ridiculous by any means, and the cheek becomes loose. Seen closely, it is a pattern that is firmly reproduced to the unique curve and dents of the men's urinal. Is the rabbit talking to the panda next door? 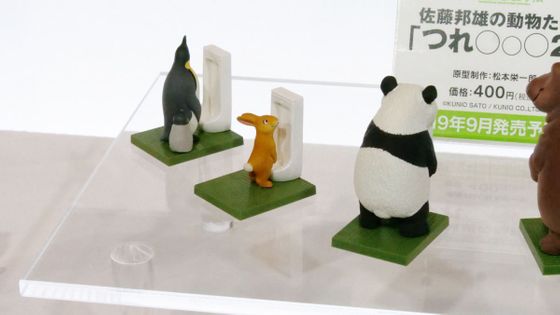 The penguin's baby stands behind the parent penguin, but becomes somewhat uneasy when saying, 'It's not a toilet and you don't pee here.' 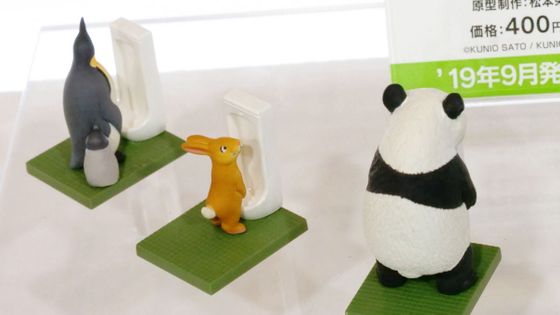 A hippopotamus, a cat, and a frog are also taken along next to the panda. These are the figures that you would like to decorate on the shelf of the toilet or wash basin. All five types of 'Tsuru o o 02' are scheduled to be released in September 2019. 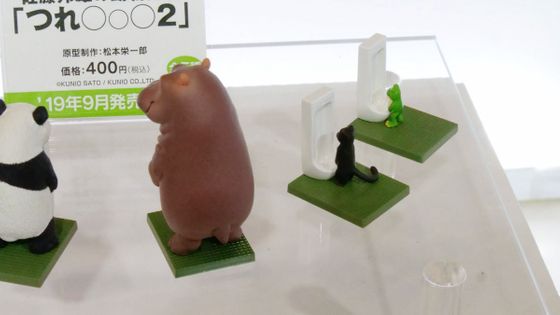 Also, a mini-figure of the work of Lisa Larson , a Swedish designer and potter, has also appeared. 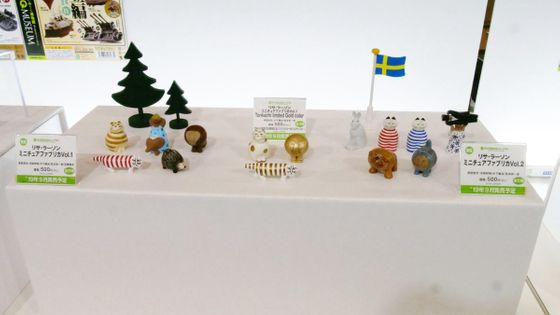 Lisa Larson's Miniature Fabrica Vol. 1 ' is a lineup of humorous facial expressions such as cats and hedgehogs, and girls who sit with arms that resemble lions with a seemingly artificial face, and their cheeks loose involuntarily. The prototypes are produced by Teraoka Kuniaki , Kinoshita Takashi , Matsumoto Eiichiro and Takuma Katsuo . 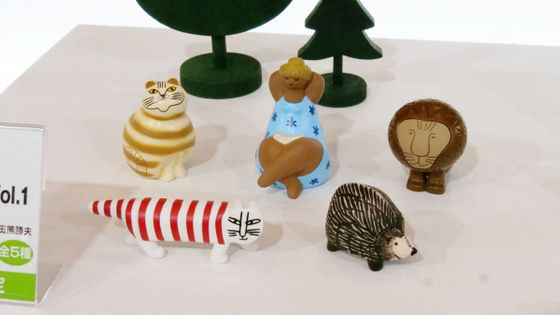 true for ' Lisa Larson's Miniature Fabrica Vol. 2 ', but the face is flatter and the cat looks like a bulldog, a cat that looks like a wreck, or a gentleman who is being lifted by an aunt. 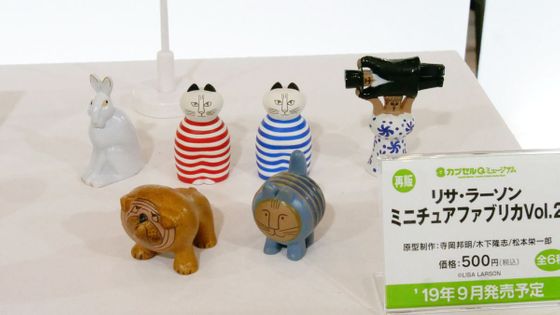 The 'Lisa Larson Miniature Fabrica Vol. 1 Tonkachi limited Gold color' is a special color difference version that can only be purchased at the

TONKACHI, LTD . Retail store that fuses art and design with products. The Lisa Larson series are scheduled to be resold and released in September 2019. 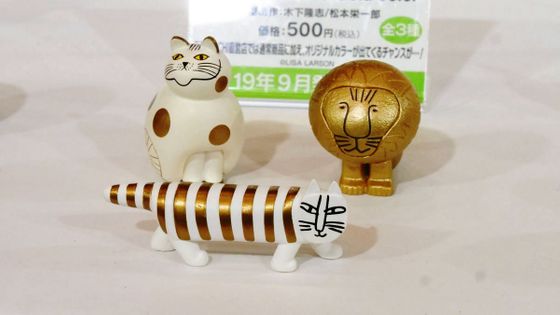 In addition, from the mini figure '

miniQ ' series, Japanese-style figures based on the paintings by Yusuke Kawanabe and Kuniyoshi Utagawa also appear. 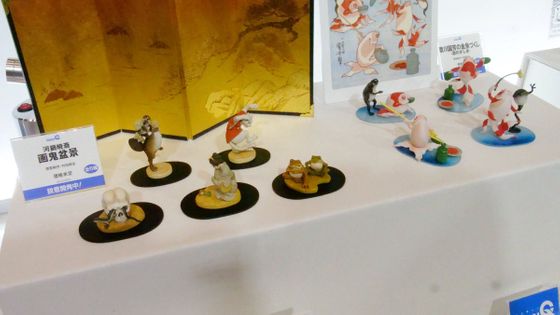 The figure series by Reina Kawanabe is entitled 'Picture Demon Bonkage' because it was named that he was described as 'Picture Demon'. Figures of interesting subjects such as figures with lizards coming out of the eyes of a skull with a motif of one of the ' sexpiece birds and beast drawings ' and figures in which a beautiful woman is looking at a frog from ' Beautiful observatory game' Are lined up.

It is the frogs who are staring at the beauty in 'Beautiful Sight-and-scenery drawing' that has a muddled expression with a muddle. 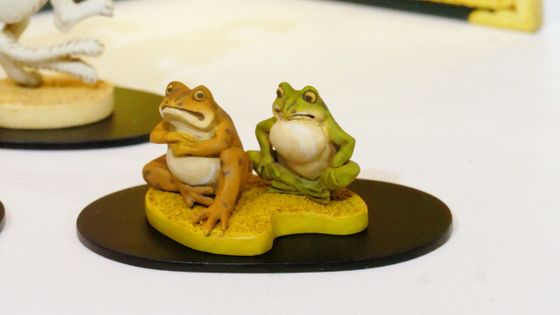 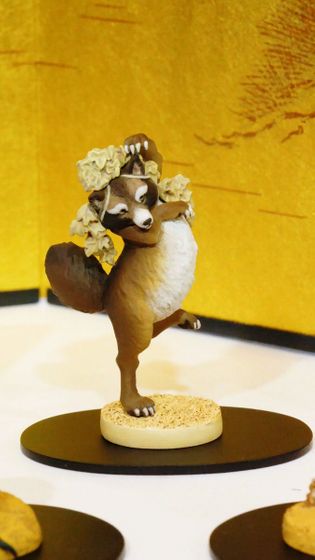 A cat that dances to compete is a figure. 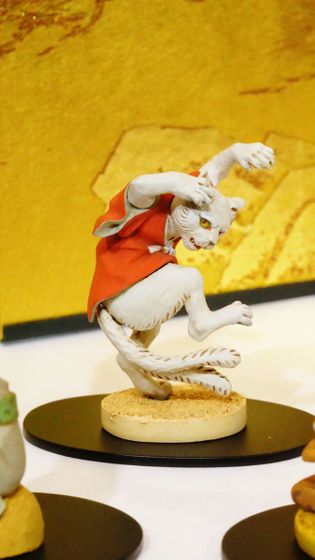 In addition, from the goldfish kite series of Utagawa Kuniyoshi, in the figure with the motif of ' Sake's sake ' ... 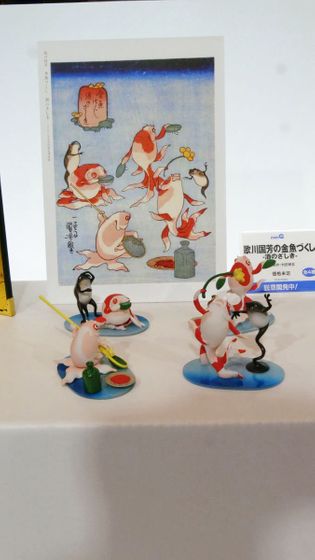 A goldfish dancing hand-painted aquatic plants and a figure of a frog that competes with a loser are figured. 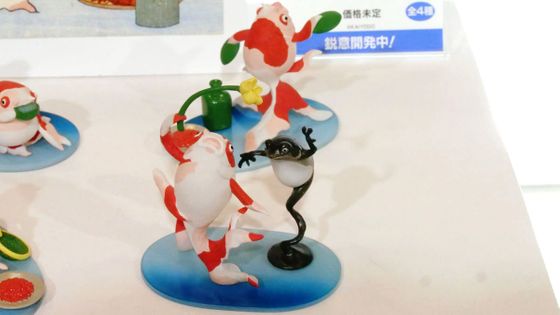 In addition, the figure of the frog was set as a figure in the set as well as a goldfish who drinks alcohol. 'Gakiboshi Bonsai' and 'Utagawa Kuniyoshi's Goldfish Tsukushi' are under intense development, and the price seems to be undecided at the time of writing the article. 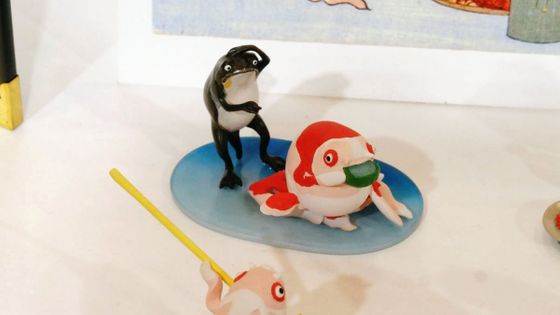 In addition, even general dealers have found many animal figures.

SPICE ONINGYO han ' booth, there are a lot of various goldfish figures based on the goldfish kite of Utagawa Kuniyoshi. 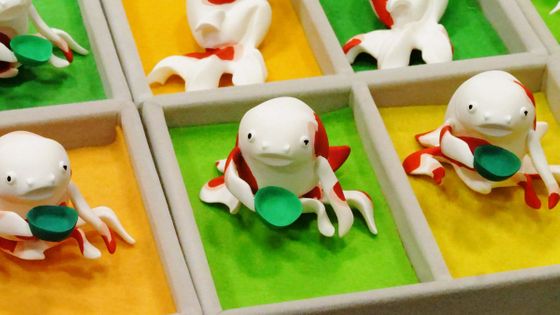 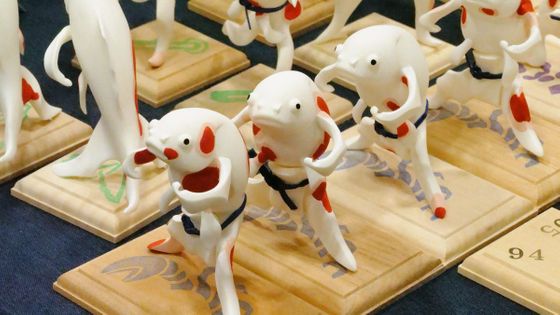 In addition, a figure ' Sakai ' with a motif of carp climbing a waterfall was also displayed. The expression and coloring of the water that escapes is beautiful, and you can feel a refreshing feeling. forest cat works ' booth, there is a diorama titled ' encient survivor '. If you look closely at it ... 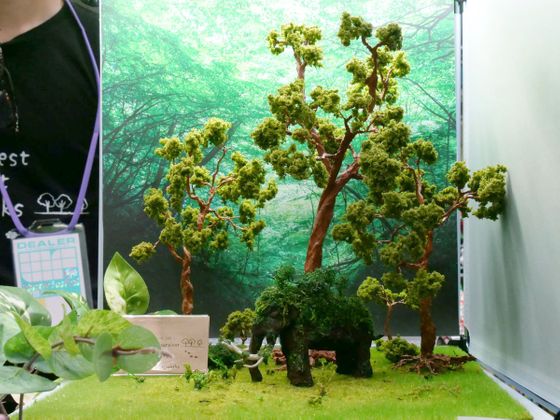 There was an elephant with a moss. The body is covered with green, and it has two fangs and it has a long history. In the display ' Giant Totus ', there is a huge turtle with a tree growing from the shell. A huge horn, a sharp eye, and a Kiba that had grown out of the mouth had a very scary, overwhelming presence. At the booth of the cat group , the appearance of the gangster-style cats is as the name suggests. A cat that says something awful with a knife and says 'scratching' ... 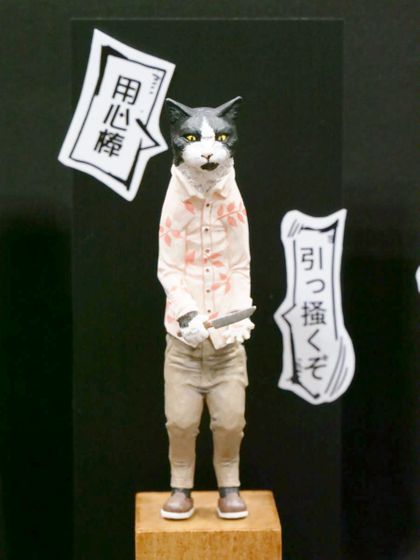 There was a cat who said that 'forgive Aniki' and made the neck shrink. 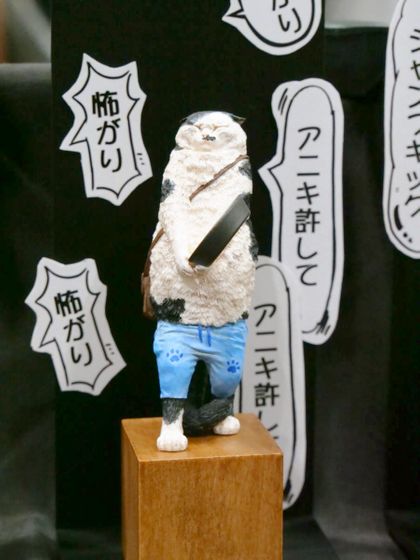