Ant-type robot with a total length of only 2 mm appears, which can be output with a 3D printer 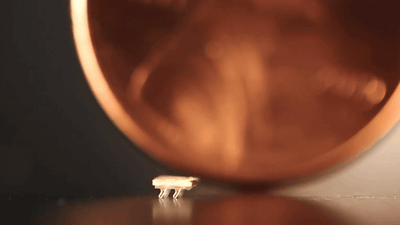 at Georgia Institute of Technology announced that it has developed ' micro-bristle-bots ', a robot with a size of only 2 mm. A tiny ant-like tiny-haired robot can be output with a 3D printer and advanced by ultrasonic vibration.

You can see how the micro-robot moves in the following movie.

This Tiny Robot made at Georgia Tech is Barely Visible-YouTube


What is put in the case in tweezers ... It is a fine hair robot. The length is only 2 mm, the thickness is 0.8 mm, and the weight is about 5 mg. It moves forward by finely vibrating. Compared to a 19.5-mm diameter 1-cent coin, its small size can be clearly seen. 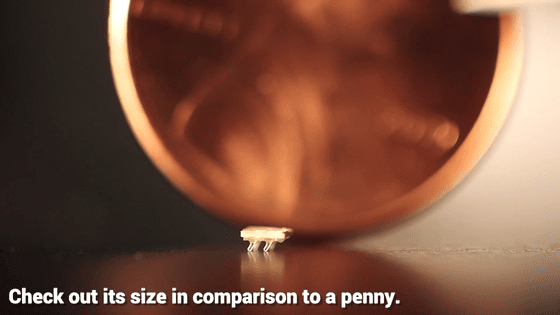 This fine-haired robot is made of piezoelectric actuators output by a 3D printer using two-photon lithography . Piezoelectric actuators ultrasonically vibrate based on externally supplied power. This vibration causes the resilient legs to move up and down, and the fine-haired robot to move forward. The size, diameter and design of the robot's feet are said to correspond to the frequency of vibration. The amplitude of the vibration seems to control the moving speed, and it is possible to move 8 mm per second while being only 2 mm in size. According to Azadeh Ansari, Associate Professor of Electrical and Electronic Engineering, Georgia Institute of Technology, he is conducting research that allows him to maneuver freely by combining different fine-haired robots. In addition, research on robots that move using magnetic force as well as vibration is being conducted. If a micro robot with magnetic force is realized, it can be expected to 'move multiple micro robots at once'.