Succeeded in creating skin and bone with 3D printer from living materials, medical technology in space goes one step forward 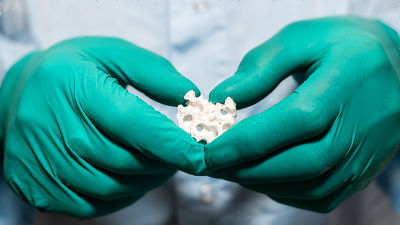 It is also pointed out that the expansion to the moon and Mars is planned , and the universe that is completely different from the earth is full of various dangers . Under these circumstances, in order to carry out skin grafting / bone grafting in space where medical technology is limited, a new technology to create skin and bone with 3D printer using human plasma as a material was developed. . Although technology has steadily progressed toward space migration, such as the Mars Migration Plan, there are still many dangers for human beings to live in space. On the other hand, spacecraft can not carry all the necessary medicines because of limited space.

For example, it is possible that burns in space may require skin grafting, or bone grafting in the case of a fracture. A solution to this situation is the method of creating and implanting skin and bone by 3D printing. When transplanting a part of the astronaut's body as a treatment such as burns or fractures, the transplanted part may not be cured in the space environment, but such secondary damage may be caused by 3D bioprinting. There is no charge. In addition, 3D bioprinting is based on the astronaut's own body such as plasma, so no rejection occurs.

OHB System AG , a developer of a large microgravity 3D printer for mounting on the International Space Station and scientists at the Dresden University of Technology hospital, which had been researched and developed from this background, was the first 3D bioprint of the project We presented bone and skin samples.

“Bioprinted skin cells use human plasma as a nutrient-rich 'bio-ink', which is easily obtained by crews performing missions, said Nieves Cubo of the Dresden University of Technology Hospital. 'Just because plasma is a liquid, it does not work well in different environments of the earth and gravity, so we increased viscosity by adding methylcellulose and alginic acid . In a space where self-sufficiency is required, astronauts are Materials can be obtained from plants and algae. '

The output of skin and bone samples was upside down to see if bioprinting could be achieved in space. The next experiment will take longer time under minus 1G environment.

You can see how the skin is actually output from the following.


It is 'Bio-ink' that has been output to Nururutto. Create faces by arranging lines ... 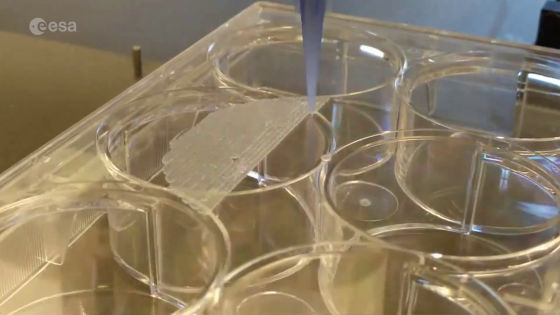 Furthermore, we will make thick skin by repeating bio ink. 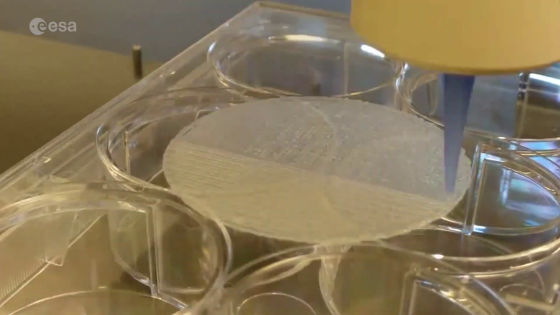 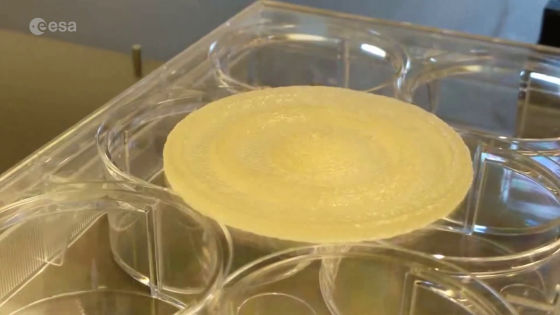 Also, from the following you can see 3D printing of bones.


It uses the same transparent material as printed on the skin and a whiteish opaque material. The opaque material is made by adding

calcium phosphate to bio ink to increase strength. Because the framework requires strength, two bio-inks are being used. 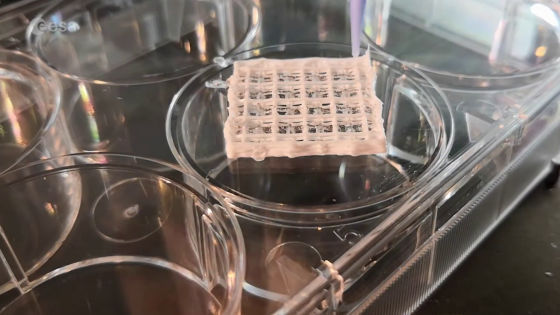 In addition, it can be confirmed from the following that the bone is printed in 3D upside down.