Internet users are puzzled when Microsoft suddenly begins to appeal to Windows 1.0 34 years ago, talking about 'What's up?' 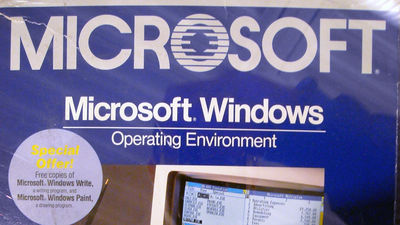 In July 2019, Microsoft started promoting Windows 1.0 , which was suddenly released in 1985 under the Windows branded Twitter account. In addition, the same official advertisement was launched in the official Instagram account created in this period, and among the net users who were puzzled, 'Why now it is 34 years old and now it appeals to Windows 1.0?' It has been a topic.

This is what the Windows branded Twitter official account looks like. The icon is a logo of Windows 1.0, and the header image is a figure of men and women who chat in front of a machine that runs Windows 1.0. In the movie released with the tweet 'We will announce a completely new Windows 1.0 with MS-Dos Executive, Clock etc.', Windows 10 · 8, 7, XP, Millennium Edition, 98 · 95 logo, 89 The brand logo will flow and finally the Windows 1.0 logo will be displayed.

To the user, 'Is this really serious? To be honest, I would like to touch it a bit because Windows 1.0 wasn't born when it was really released.' 'And enthusiastic appeal.

In response to the tweet 'I wonder if you really buy it,' he replied, 'Huh! I wanted to hear that word.' It should be noted that ' Creeuh! ' Is a spoken language popular in the 80's.

Mikko Hipponen , known as a global information security researcher , changed his profile section to 'MS-DOS Executive'. On the other hand, Windows' official account replied, 'We seem to have a bad guy already.'

Be a part of the computing revolution and get your copy of Windows 1.0 today! Pic.twitter.com/VJzgYnfEvB

'The power of Microsoft and Windows will surely take you to an unknown world, such as Excel, Charts, Flight Simulator, etc.', although the packages of Excel , Word , and Flight Simulator are shown in the photos, but the lines are It was released in 1985. At that time, Excel and Word were still 'Excel for DOS' and 'Word for DOS', and an office suite combining multiple office software such as Microsoft Office into one set was not released.

With Excel, Chart, and even Flight Simulator, there is no telling where Microsoft will take you to this summer. Pic.twitter.com/sEHLuXysXn

In addition, the official Twitter account 'Is the minimum memory required to run Windows 1.0 in 1985?' Ask the quiz in the form of a questionnaire.

Running Windows 1.0 in 1985 required at least how much memory?

On the other hand, a devotee who pulls out and checks the actual Windows 1.0 manual also appears. According to this manual, it says 'At least 256K of memory', so the answer is 256KB. It should be noted that 512KB of memory is required when launching multiple applications.

Hmm let me just flip open the manual .... here we are. Pic.twitter.com/zJCgJIudv6

'I'm waiting for you! What is Google? We're talking about Windows 1.0.' It was

In addition, it is a tie-up with the drama ' Stranger Things unknown world ' season 3 delivered from July 4th, 2019 by Netflix that Microsoft appealed for Windows 1.0 suddenly over 34 years Although the possibility is pointed out, Microsoft has declined to comment.