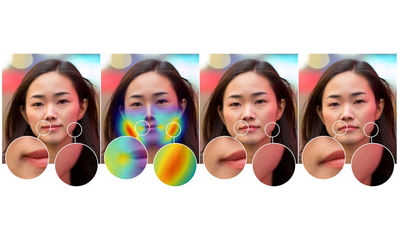 Adobe Photoshop ' is a software that is capable of performing super magic remodeling of a level that does not retain the original image if used well. It has evolved to a very difficult level to see if a photo is processed in Photoshop with an amateur eye. Adobe attempts to identify such images processed by Photoshop using neural networks.

Adobe, the developer of Photoshop, claims that Photoshop, released in 1990, was a big step towards democratizing creativity and expression. Since then, it boasts that Photoshop has had a major impact in the field of visual expression, but at the same time, we are aware that fake photos and content produced by image editing have caused many problems And

Therefore, Adobe has been searching for a way to solve the problem using new technology such as artificial intelligence (AI) in order to increase the reliability in digital media. And, Adobe researchers Richard Zhang and Oliver Wang, and co-researchers Dr. Sheng-Yu Wang of the University of California at Berkeley, Dr. Andrew Owens, Professor Alexei A. Efros, are five members of the National Defense Advanced Research Plan. Bureau of (DARPA) Media Forensics under the sponsored program, 'of Photoshop distortion ( Face-Aware Liquify successfully created a tool that can be used to filter)' to detect 'processed image in Photoshop' You are The study by Zhang et al. Is part of an effort to detect 'whether or not a wide range of data such as images, movies, audios, documents, etc. has not been processed.'

The research team applied Photoshop's distortion filter to thousands of face photos on the Internet to enable convolutional neural networks (CNN) to identify 'image-processed human faces'. Create a data set of 'processed images'. In addition, a real person using Photoshop to process a part of the image in the data set broadens the range of techniques used for image processing, and CNN identifies 'image-processed human face' Succeeded in improving accuracy.

“We started by showing a pair of original and processed images to people we know that a part of the face has changed. Our approach has been to Oliver, a member of the research group. In order to prove useful, in 'Identifying Processed Images,' our neural network must perform much better than the human eye.

According to the survey, the accuracy rate for identifying “processed image” is 53% for human, while the tool using neural network developed by the research group showed a high accuracy rate of 99%. That's right. In addition, the tool has also succeeded in restoring the processed image to its original state, according to Adobe that its accuracy is 'the level at which researchers are impressed'. Professor Efros, who participated in the study, stated, 'There are so many geometrical variations in the human face that it seems impossible to bring back the processed image. But, of our tool In the case of Deep Learning, the combination of 'low-level image data' such as distorted parts and 'high-level image data' such as the entire layout could be examined, so it was processed impossible. It will be possible to do the work of restoring the image. '

However, the realization of the idea of implementing a magic function that restores the processed image with a single button in Photoshop is complemented by Zhang, 'it is still far from reality.'

Gavin Miller, a leader in Adobe's research department, said that the tool developed this time is an important step to detect certain types of image editing, and the undo feature works surprisingly well. Such knowledge that the general public can manipulate the content through such technology will be the best defense to protect themselves from intentionally edited malicious data. ” You