The artist expresses 'if it is different type of Pokemon?' 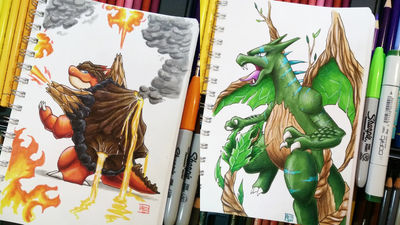 Detective Detective Pikachu ' has recorded smash hit all over the world, and it is a pocket monster that has found new possibilities in live-action films as well as games, anime and manga. Even in the detective Pikachu, various Pokémons showed me a cute but different appearance from anime and games. Pokemon and its types are closely related as 'Pikachu Speaking of Electric Attack!' But artist Abz painted ' What kind of Pokemon was it if it was another type? ' Is expressed in

Formerly, the type of fusigibana is transformed into a water type. lizard- type lizardon is custard-type. Because there is a wing, I may also have a hiko type camex has become little type. The appearance of the erupting mountain is Bakuda- like. pityu that became a dragon type. There was also a painter who shuffled each original type in such a way as Iwa, Aku type of Gradon , a little type of Banguirus , and a type of Lizardon. Abz is using Copic markers for drawing. In addition, the legendary Pokemon type of

freezer thunder fire , which appears in the first-generation Pokemon, has been replaced.

A little type of freezer Eevee we draw the illustrations in anticipation of the new evolution of.

At the time of writing the article, it was an Ebie that can evolve into eight types of water, electric water, hono, espar, acuity, luxuriance, koari, and fairy type, but it was drawn that it would evolve to a type Is the following illustration. It is named 'Toxeon'. 'Graniteon' where Eevee has evolved into a rocky type 'Eeveon' evolved as a normal type 'Drakeon' evolved into a dragon type 'Dynasteon' evolved into a worm type 'Chromeon' evolved into a haze type 'Obliveon' evolved into a ghost type 'Champeon' has evolved into a type There have been attempts to automatically generate Pokemon's name and characteristics using neural networks, but it seems that human imagination is not yet lost.