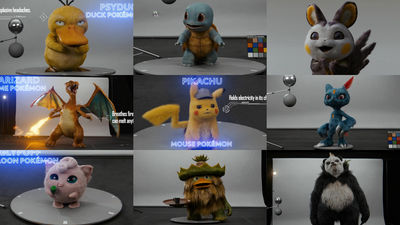 Detective Pikachu ' is a Hollywood version of the Pokemon movie that will be released in Japan ahead of the world on May 3, 2019. The main character, Pikachu, is played by Ryan Reynolds, who played the main character's deadpool in the movie ' Deadpool ', but that Reynolds has released 'Video of a real audition with the detective Pikachu'.


A clapperboard with the words 'POKÉMON SCREEN TESTS' appears, and the sound starts and the movie starts.

The first thing that came out was the

pudding of the fusogen pokemon.

responses from users who were not convinced that pudding was hairy on the Internet, but the appearance of blowing twirling bangs (?) Is very adorable.

The black and white back is ...

This expression makes the tail shine. In the work, it seems that I got a nice outlaw role.

The left is Mitsudodori Pokémon's '

Dodorio ', and the right one is Pokemon's ' Fushigibana '. Each Pokemon poses in love in front of the white background in the shooting studio.

Eevee ' also appeared. 'Notes can be evolved into various types' with a note.

The flame that squeezes from the mouth melts everything, so it gets a cast as a strong enemy who stands in front of the main characters.

Pikachu ' of the main character. Unlike other Pokemon, it is a little motivating rose.

When the lid of the test tube is opened, purple smoke from inside is also included, and Pikachu also looks like this.

Kodak ' is a Pokemon whose head hurts with its own energy.

The movie also features Pikachu sitting on the back seat of the car and Kodak talking between filmings.

Pikachu 'is we are listening to healing music, so there is no worry that your head will be hurt and we will be killed!' And jokes are shown, showing a concern to other actors like a leading role.

Bero Ringa ' of the nameless pokemon

Many Pokemons will appear, such as '

booster ' is projected between ' Dialga ' and ' Palquia '.

Goronda ' which is the evolution of Jan Cham

Lumpappa ' selected as the master of the bar

Emmonga ' has a bruise and this look.

Dogome ' who stopped shooting the DJ role of the club

Neura ' of the Kagezu Pokemon

Toughness that stands out Teririk Pokemon's '

Throw it to the floor and throw it on the floor ...

The movie ends with a lively caikoing that bounces on the floor.

Finally, the figure of Mewtwo appears for only a moment.

·bonus
To commemorate the release of the movie 'Detective Pikachu,' emoticons have been added to the hashtags of Fusigidane, Tokage, Zenigame, and Miutwo. As pictograms support not only English names but also hashtags with Japanese names, you can use as many as you like hashtags with your favorite Pokemon pictograms.