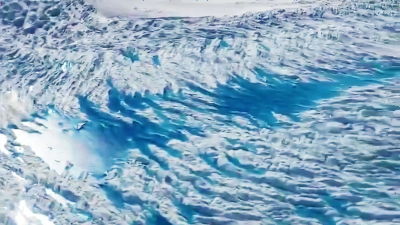 NASA has long reported that

Greenland's ice melts faster than expected, but a new NASA researcher reports that the ice has been melting earlier than usual. doing.

Researchers involved in NASA's Operation IceBridge, a project that observes Arctic and Antarctic ice by air, found a pond in Greenland's glacier during flight. You can see the pond that appeared in the glacier in the following video posted on Twitter by geologist Brooke Medley, a member of Operation IceBridge.

Meltwater is filling in the crevasses and ponding on the surface.

While the blue water is breathtaking ????, the early onset of melt over Greenland is concerned for ???? pic.twitter.com/56g0bZDNDh

Depending on the angle, it is difficult to understand, but the part where the sun's light is reflecting and shining is where the ice starts to melt. According to MacGregor, the ice starts to melt every year from late May to June, and it seems that the ice melted earlier than usual because the spring of 2019 was warm. The temperature of Greenland this spring rose to 10-15 degrees Celsius. MacGregor said that 'blue water is breathtakingly beautiful, but I'm concerned about the early onset of ice melting.'

Above Average Temperatures Well Across All Of #Greenland Over The Last Week. Follow Forecasts For Greenland (Weather And Surface Mass Balance) This Summer Using The MARv3.9 Model (Forced By GFS) At Https://T.Co/xeu1qQ3ksc Pic. twitter.com/BxyWsnR2Gc