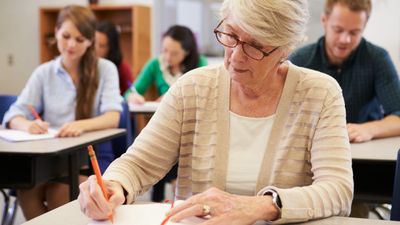 The globalization of the economy has progressed, and the need to learn foreign languages has been increasing, but there are also voices of anxiety saying, 'Because of this age it is impossible to master foreign languages?' In response to such anxieties, scientists at MIT have shown in research that “the English learning speed of adults over the age of 20 is almost the same as children”, providing an online course where you can talk in native and foreign languages Scott Chacon, CEO of Chatterbug ,

A study called “A critical period for second language acquisition” published in “ Cognition ”, a journal on cognitive science, has approximately 670,000 English speakers and English learners. As a subject, we investigated the relationship between the learning progress rate and age. In the research, he used the 'Quiz for measuring English proficiency' to define what is 'English proficiency'. The following image is an example of this quiz, and the English sentence 'Every hiker climbed a hill' is used to select which figure to show. 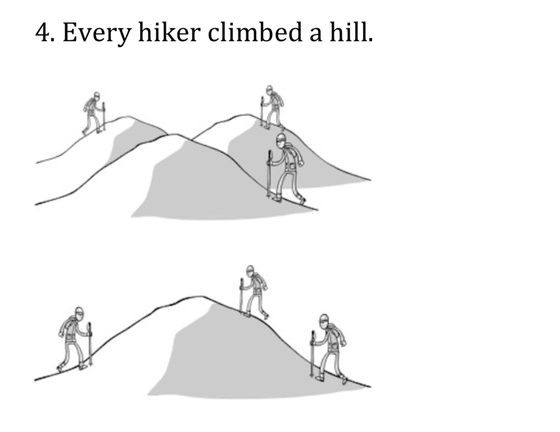 The accuracy rate of the English native speakers who participated in the experiment was about 90% or more, so in this study, it is said that 'Native-like English ability' is defined as '90 or more with 100 full quiz points'. . In the example above, the interpretation that 'each hiker climbs each mountain' is correct, and the above picture is correct.

The graph below shows the score for the quiz (vertical axis) and the number of years of continuous learning (horizontal axis) for those who have started learning English since the age of 20. The graph shows that only the top 25% of the quiz results are plotted, but the average score is around 85 in the first year of study. The score gradually rises and reaches 90 points equivalent to native in the 8th year of learning. 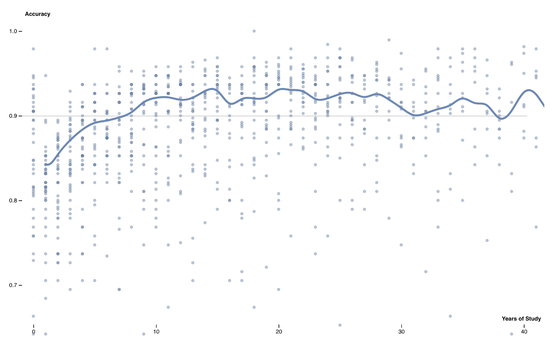 The other ages are shown in the graph below. The red graph is for those who started learning English before the age of five: yellow for children aged 5 to less than 10, green for aged 10 to less than 20, blue for aged 20 or older The person who started In addition, we use only the result of the person who entered the top 25% in all. 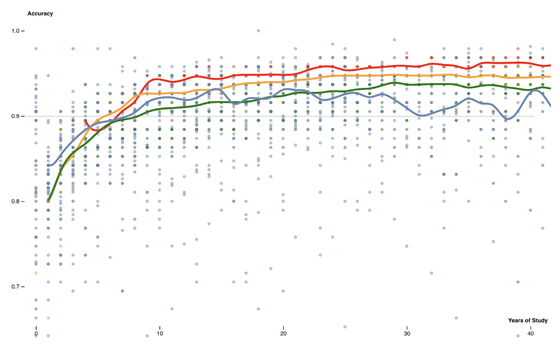 Looking at the graph, although there is a difference in the results of the quiz after the 10th year, all have cleared 90 points which is equivalent to the native before and after the 7th year of learning, so the speed of improvement of the English language skills is too much It has been shown that age does not matter. In addition, the average score of quiz is over 80% even in the first year of study.

In addition, it is said that 'it is likely to be able to learn native English grammar if you start learning before 18 years old' in the research, but 'Why 18 years old is one turning point' In terms of the point, in the dissertation, it is pointed out that “the living environment of humans changes from the age of 18”. Basically, children 18 years old or older learn English in classes etc. and it is easy to secure study time. On the other hand, after the age of 18 changes in the living environment occur, such as university admission and employment, and it will be difficult to ensure regular study time for languages on a day. 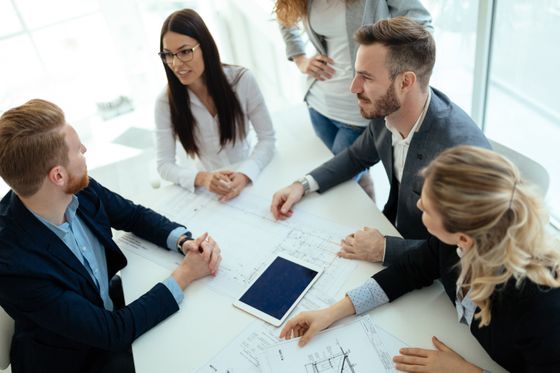 Chakon said, “It is not too late to start studying English even after the age of 20. It takes 10 years of study to reach the native score of 90, but the quiz score is The score is over 80. It is not difficult to reach the 'very excellent' level without going to the native level. '