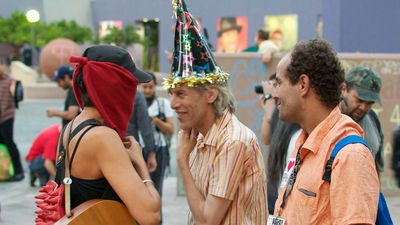 It is said that there are about 1.5 billion people speaking English in the world. However, more than 70% of them use English as the second language, not mother tongue, pronunciation and accent greatly differ depending on the region. People unconsciously form a bias in the brain due to accent of speech and feel distrust for accent different from theirs, but speech that we talked with confidence has a tendency to trust even if accent differs There are research results that have been announced.

Do we trust people who speak with an accent? | Newsroom - McGill University
https://www.mcgill.ca/newsroom/article/do-we-trust-people-who-speak-accent

Why do not believe non-native speakers? The influence of accent on credibility
(PDF file) https://mdl.uchicago.edu/sites/keysarlab.uchicago.edu/files/uploads/Lev%20Ari%202010.pdf

Ms. Sir Lev-Ali, who studies cognitive psychology at the University of Chicago, reports on the experimental result that "English spoken with accents in a foreign language gives distrust to native speakers." A research team led by Mr. Lev - Ali gives a native English speaker and a non - native speaker a speech which is unknown whether it is true or not, such as "Kirin can live longer than a camel if it does not drink water", a speech I investigated whether native speakers who listened to believe it or not. Then, in English where the foreign language's rounding is strong, it turned out that the native speaker who heard the speech tends to doubt its contents.

Professor Mark Pell, professor of communication science and disability at McGill University in Canada said, 'Accent is strongly indicative of the speaker's identity, such as the native language of the speaker and the place of origin,' and that different accents from the native lead to distrust The study says that it could lead to prejudice against foreigners. Professor Perle pointed out that people unconsciously grouped native speakers "inside the group" by distinguishing accent and "non-native speakers" out of group "in the brain. We conducted experiments on the assumption that this grouping may have an effect on distrust.

Then, contents talked about "non-native English in Australia" or "English in France" tend to be judged to be unreliable compared to "naive Canadian English" native to the subject I understood that there was. Therefore, when examining the subject's MRI scan, it turned out that different areas in the brain were activated by accent of speech. When listening to the accent of "in group", the "region related to inference based on past experience" is active, and when listening to the "outside group" accent, it is further "brain related to auditory processing It is understood that the area of ​​"is deeply involved.

Also, in the experiments, the speech made with a non-native accent did not trust the "things you talked about" or "ordinary talks", while the "you talked with confidence" I understood that it is trustworthy. When studying the reliability of speech spoken by non-native accents, the research team not only examines the contents from past experiences, but also to pay attention to the speaker's spoken voice I am dealing with the process.

Shao Ming · Jiang, a coauthor of thesses and an associate professor at Tongji University , said, "I think that if you want to be trusted by people, you think you should talk with confidence in every situation. The result of the research is a discovery that has a great meaning to those who are talking with accents in every situation from employment to education and justice. "