What is the 'radio wave war' developed by Nazi Germany and Britain during World War II? 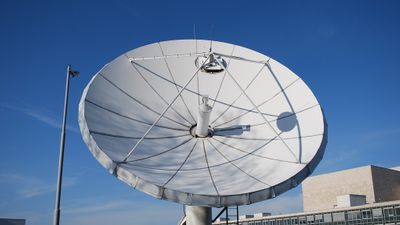 During World War II, the Nazi Germany bombed Britain, causing a number of damage. German bombers were able to successfully bombard the target despite night air raids and terrorize the British people. German bombers have succeeded in night air raids using 'radio waves', and 'a fierce battle over the radio waves with the United Kingdom was taking place,' said Eric Brown, a military enthusiast. I summarize it.

During World War II, Germany succeeded in an effective nighttime raid against Britain. In general, it was difficult to detect at night because the target turned off the light, and it was very difficult to achieve results by night bombing with the technology at that time. However, German air bombs bombed at night with very high accuracy.

At that time the UK had a light control in preparation for air raids and night raids were very difficult for the German side, which had neither inductive bombs nor advanced GPS. The RAF also did not have advanced search technology, and during night air raids confirmed the star in the night sky from the transparent dome called Astrodome at the top of the aircraft, and used the sextant to confirm the position of the target It was said that Before the war, the German aviation industry spent a large amount of money to build safety systems. Safe landing on the runway is important to ensure the safety of the pilot, especially at night or when visibility is poor, and in Germany the landing navigation system '

Lorentz Beam ' has been developed .

When the pilot of the aircraft tunes the radio frequency to a fixed radio wave, the pilot can hear both dots and dashes only in the narrow range where the two radio waves overlap. If the pilot can only hear the dot sound, the aircraft is leaning too far to the left in the direction of travel, so shift the path to the right and look for a position where both the dot sound and the dash sound can be heard. Naturally, in the opposite case it is possible to locate the aircraft in the same way.

The problem is when to drop the bomb, but Germany solved this problem by adding one more signal. The pilot continues to fly according to the first signal and drops bombs at the point where the other signals overlap. If the two signals are illuminated just as they cross the target, the pilot can drop bombs at precise timing even if the ground is dark.

This method, which Germany named

Knickebein , was able to accurately point out the British targets by radio waves transmitted from Nazi's offices throughout Europe. 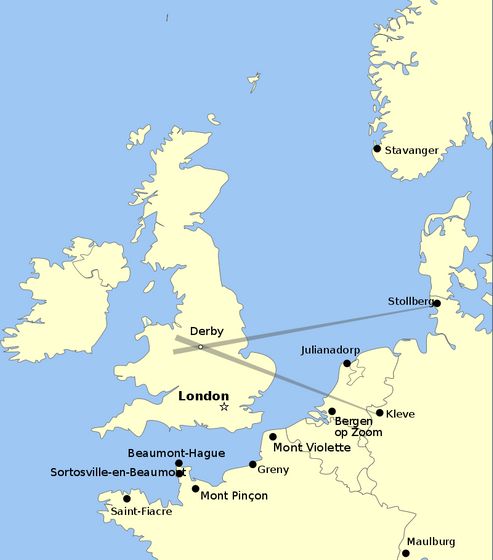 Soon after, the British side also realized the fact that Germany was using radio waves to enable accurate night air raids, and sent a fake radio wave that appeared to be the German side radio wave, making a jamming operation that misleads a bomber pilot. Implementation. Although the operation succeeded, the Germans improved Knickenbein and devised a new bomber guidance method called

X-Gerät . X-Gerät is a guiding method that was also used for air raids on Coventry.

Since the system installation crashed, the mechanism of X-Gerät was also clarified by the British side. However, it seems that the German army has devised an additional bomber guidance method. It was a system called Y-Gerät , which used a single radio wave to accurately guide a bomber.

What the United Kingdom used to block Y-Gerät was the radio tower that the British Broadcasting Corporation (BBC) built at Alexandra Palace to broadcast on television. The radio tower had stopped broadcasting from 1939, but fortunately the frequency band used by Y-Gerät and the frequency band used by the BBC coincide, so the UK is faked from Alexandra Palace to Germany I sent a reflected wave to disturb the operation. In addition, BBC's sound engineer was able to detonate the German radio receiver and injure the pilot's tympanic membrane. Before long, Germany gave up on the bombing of the United Kingdom, and began to use air force to fight the Soviet Union. If Britain did not have the means to counter the German bombardment, the situation could have changed, says Brown.