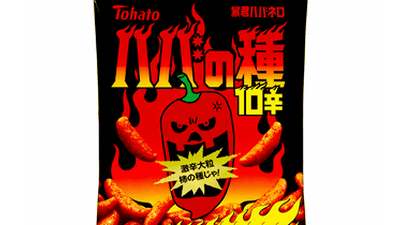 Tohato has announced that it will release the ' Tuner Habanero / Haba seed ', which has been turned into a ' Kanno seed ' on April 8, 2019, as a new product of the potato snack 'Haunter Habanero' series. Unlike the normal 'Haunter Habanero', the persimmon seeds are coated with soy sauce flavored pepper extract and finished with habanero puree. The level of severity is level 5 of the classic 'Haunter Habanero' and level 10 of this 'Haba seed'. 'Peep' is not peanuts, so it is a hot dish as you eat. The reference retail price is 141 yen excluding tax.

Many graduate students are found to be mentally ill-GIGAZINE

Scientists say, 'I was deafened by the impact sound of dropping the lid of the toilet tank'-GIGAZINE

Lectures at prestigious Yale University, 'What brings happiness to life?'

What is the true character of the 'cracking' sound that squeaks fists and fingers? -GIGAZINE

What kind of thing is 'Production Committee'? What kind of work is done? On-site personnel told at roundtable of AnimeJapan 2015-GIGAZINE

The building next to Kawai Haruna Station School was dismantled, and the story that it was revealed that it was a scam was too funny ... pic.twitter.com/Fm1xgMNik3

As a result of dismantling the building next to Kawai Haruna Station School, it is here that it has been revealed that the height was inflated and it has been built 'Contemporary billboard architecture'-Togetter

Just put BGM of the Avengers logo on the new era announcement,
Because it feels so magnificent,
I want to recommend it to the official residence. pic.twitter.com/Sebyj5ZS8f

I made a year roulette. pic.twitter.com/3TwFpIpKld

I want to make T-shirts with afro that appear with fluorescence pic.twitter.com/lpysOzjIob

Though it is a book, the book off
# This book is off, but this book is not here pic.twitter.com/MeadwKPMkw

A cat is sunning in the sun. Tiny. pic.twitter.com/w0NdzZV3nB

I managed to achieve the miracle of holding the fireball together if I went to take a night cherry blossom somehow, so I will never remember in Heisei pic.twitter.com/53gUR1Yj0d

In the selection work of the new era, all the six drafts shown by the government were clarified, except for the “Deriwa” decided for the new era,
英 'Eiko' (Eiko),
久 “Kuuka”,
広 'Koshi' (Koshi),
万 “Banna”,
案 Five plans for “Banpo”. The creator of “Rekazu” is considered to be Susumu Nakanishi, a national literary who specializes in Manyoshu, based on the stories of those involved.

There is one funny child # Inokashira nature culture garden pic.twitter.com/oaa4NSgiNK

# The person who wrote and written the book is a person named Osamu Mozumi. I understand clearly, but this person is a person who is learning the written books of the Tang era well, and while taking advantage of the writing style of the Tang era, doing the two letters well in this space, doing at an extremely high level I I will explain it lightly because it is awkward. pic.twitter.com/kSpmJ6wJ50

When 'Heisei' was used as a head, I made a character that would be 'Resumed'. # Ambigram # Heisei # resum # new era pic.twitter.com/IY5DbVXYUB

# I made the icing cookie in the image of the irrational pic.twitter.com/JjZc5qTJwN

It is recommended that you take a drone to shoot the cherry blossoms of Meguro River, as it gives you a feeling of 'the flower path that suddenly appeared in the middle of the city.' # Sakura pic.twitter.com/JVv5SxVmL8

Here are two books of supreme in my life, but the order of reading is important, and after reading 'Gingitzne' I read 'To buy a glove' and I would become a hat-friendly man who is kind to foxes in the future. Imagine heart-warming expansion.
If it is reverse, a little boy will become a gon in the future, Goo Oon! ! It is important to note. pic.twitter.com/uUiKPQFi9h

I would like to tell people who are repeating the process of drying and re-purchasing in a refrigerator with ginger and garlic out of use.

I wonder why this is not even more famous ... I can not take it for about a week (I can take it off immediately if I want to take it) even if I just put off the sticker, so the soft tip can be adjusted with nail clippers and the length does not float from the nail. You can buy it for 1200 yen or so and there are various designs above all, so cute and not perfect? pic.twitter.com/uIyaS6bWn5

When I searched for Edo Kiriko with cherry blossom motif, there was a nice gyoza bowl from Tashino Glass Processing Center. The pink colored glass called gold-red is lightly scraped off, and a beautiful gradation of cherry blossoms blooms on the bottom of the moth. It is a luxurious work that I would like to devote to at Hanami's seat. pic.twitter.com/Wg8QYMxvhJ

Five good things to do when an engineer encounters a problem-Mitsuyuki.Shiiba

Don't stand up to a new culture-Masayoshi Son, Chairman and President of Softbank Group [From Heisei to Rekazu]-Yahoo! JAPAN

The Internet itself is at the end of the planting era, and has become a natural thing like the old-fashioned 'literacy abacus.' From now on, it is the age of harvest and harvest. It is AI (Artificial Intelligence) that is the key to greatly influence the harvest in the harvest period. That is, AI is also the key to brighten the era.
As I have no other projects other than AI, I am an AI by now. At the beginning of the Internet, Softbank's main business was wholesale and publication of PC software, and the income from the Internet was about 0.1% of sales, but I said, 'I am no longer interested in anything other than the Internet, I have PC work. 'It will come' completely shakes it off. I was rushing to 0.1% with 99% power.
Similarly, I am now 99% more focused on AI. Even with that much swing, it is a difficult game in the world.

'Pub' is closed on September 30 ~ A long-established service that allows anyone to create and sell e-books to end the service – HON.jp News Blog

Organize the mechanism of Java GC-Qiita

◆ Anime · Games · Manga (Sub-Carl)
'I don't want to hurt, so I want to focus on defense.' Animation project in progress PV-YouTube

I made the theme song of [Regumi] wonderfully after the FF ,,,, pic.twitter.com/mDKXfoxCx8

I made a cool song because the new era number 'Rekazu' is very cool pic.twitter.com/T7vOJwVWcj

Doraemon that you're carelessly disappointed before the announcement pic.twitter.com/NVKGDOZrCI

# Poptheppic
I have put together the voice actors who appeared in the table by Excle for each version. It is these 32 people (possibly) who played Popco and Pippi beauty. If you haven't seen it yet, but you've seen it once but want to see the other Ver, it will be nice if it is useful if you have voice actors out there but you don't know what to look at. pic.twitter.com/JPO8625JiJ

If you know Gundam, it is twice as interesting as # Popthepic pic pic.

Because Poptepi was SEED, 'I was like that,' I was surprised to see it flowing. pic.twitter.com/GZxKp4az2Q

As you die, Gundam W pic.twitter.com/5pQcxdhYBu

Have you enjoyed Poptepi OP? Mr. Ohhari said, 'Please do it because I'm doing it because it's doing Bali', so I tried to put it in the feeling of being as good as possible. However, Kore is the limit for myself now, please pardon it because I put a ear ball. # Popthepic pic pic.twitter.com/MlA1z19vBI

Our dog is rival to human sister. pic.twitter.com/Q2wnE0Dvuy

Story that I thought that was great while my mother # Parenting cartoon # Parenting picture diary # Mami mume diary pic.twitter.com/0eAvOAzpLw

What is your favorite type? pic.twitter.com/Cik2NlJkKa

I recorded it because it was the best 8bit arrangement of Las Boss for those who can not see FGOQ ending ... pic.twitter.com/s6TFVHmWN2

The story of a boy who has been deceived confessed to April Fool's Day. pic.twitter.com/cOVrGBzBn9

If your son wrote a letter to Nintendo, you will receive a nice reply and you will be delighted to use the Splatoon paper and thank you! I love Nintendo! pic.twitter.com/fP3kNaCBRZ

I tried to make a transition from Heisei # to a sumo with Lego. # New era pic.twitter.com/LzckHimxNT

Previous “FAIRY TAIL” you can see in 3 minutes-YouTube

I like to draw a girl who is sleeping with a flower and I draw it well # I paste my masterpiece at the end of Heisei pic.twitter.com/hFJeWzdeOh

If it is an illustration with deep feelings, it will be this ~ FGO holy night supper, notice picture at the time of implementation of Jizo, cover of the first art book, Halloween illustration of 2013 # Paste your own masterpiece to Heisei last pic.twitter.com/CIo0UK94ha

# Attach your representative work to the end of Heisei
A guy who got a reaction than I thought. pic.twitter.com/PIDP2dWTUR

# Attach your representative work to the end of Heisei
It was a consistent theme to draw daily and non-daily boundaries pic.twitter.com/syVnxGou5V

'Kaguya-sama wants to tell you' I participated in 12 episodes and the original picture!
Thank you very much! (* ^ _ ^ *) # Kaguya like pic.twitter.com/XinqaULaAT

Animation 2 made as it is with late-night Nori pic.twitter.com/gTKScVICZa

# Post your representative work at the end of Heisei pic.twitter.com/niodgQasPE

Fish-eye girl # Paste your own masterpiece at the end pic.twitter.com/n9MJcSSsQQ

A girl who wants to sweeten pic.twitter.com/12pGGwVlDb

Bright and happy to pic.twitter.com/8eWp6Qt79D

What J PRIDE: Is it suspected that you have an eye disease at Ichiro? Doctor pointed out for several years ago

624,850 people in the third consecutive season, 34714 people per match on average! The number of professional baseball spectators increasing year after year: What kind of stadium @ what J summary