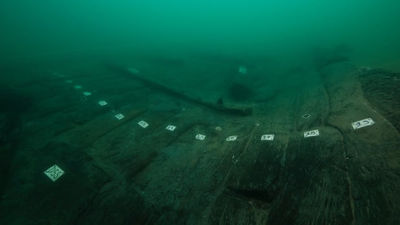 The second volume of 'History' by Herodotus, an ancient Greek historian, describes the Nile and describes a cargo ship called 'Baris'. For a long time, scholars had a hard time interpreting the text, but a survey of a ship sunk near the mouth of the Nile reveals what Baris was like. The Oxford University Maritime Archeology Center , which was conducting a survey of the waters near Alexandria with the support of the Hilti Foundation , is in an extremely state of 70% of the hull remaining around the ruins of the submerged port city ' Tronis-Heracleion '. I found a good shipwreck ' Ship 17 '.

According to the material published in the paper by Alexander Belov , who was involved in the investigation, the appearance at the time of discovery was like this.

Tronis-Heracleion is around here. It is located northeast of Alexandria.


Ship 17 is characterized by a large crescent-shaped hull, which is 28m at the longest part, and a structure that combines a plank with a tenon. This is exactly what Herodotus wrote in Volume 2 of 'History', which is similar to the cargo ship called 'Baris', which is made by arranging planks cut to a length of about 1 m like bricks and biting a tenon . You can see that what Herodotus wrote was true as it was.

It is believed that Herodotus's steering system, which 'had a hole in the keel and was passing through the rudder,' was like this. 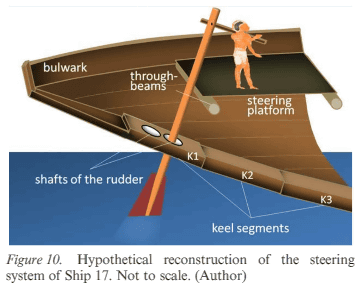 The Oxford Maritime Archeology Center publishes the research results together, and the story about Ship 17 is summarized in the book ' Ship 17: a baris from Thonis-Heracleion '. This book can also be purchased on Amazon.co.jp, and the price at the time of writing the article is 6458 yen.