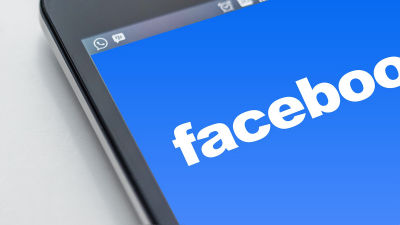 When issuing the new data protection rule 'GDPR' which came into effect in 2018, Facebook was a top secret lobby targeting politicians around the world including George Osborne who served as Finance Minister of the British David Cameron Cabinet It turned out that we were doing activities. According to the newly leaked confidential internal document, Facebook has asked politicians to oppose the enactment of GDPR, promising investment and incentives. 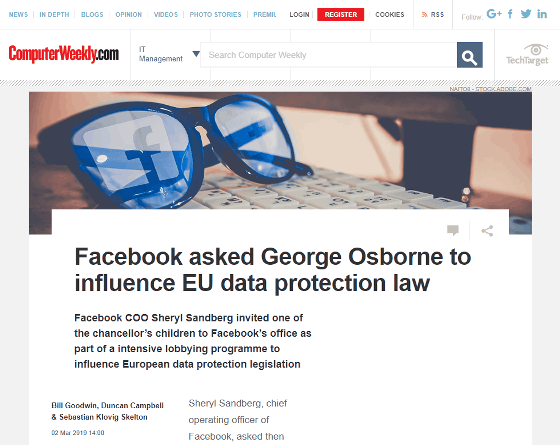 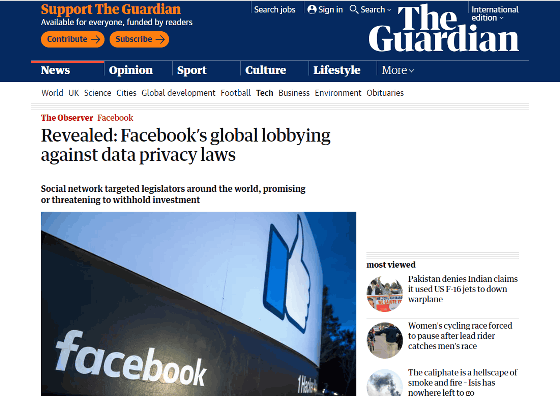 According to the leaked internal document, Facebook has been conducting secret lobbying for legislators and administrative agencies in the UK, the US, Canada, India, Vietnam, Argentina, Brazil, Malaysia and the EU 28 countries.

Lobby activity is to stop the GDPR which puts excessive restrictions widely on Europe. Since Facebook has created a lot of employment in Ireland's Dublin Campus, Facebook has established a good relationship with former Prime Minister Ender Kenny . So Kenny claimed to Facebook that GDPR "threatens employment, innovation and economic growth in Europe" to Facebook. "We emphasized at the meeting that the EU's data protection law will be a priority in their term, the prime minister said," Ireland is strictly a neutral position, but the European Commission I can say that I was able to have a great influence as a chairperson. "

Also, the document reveals that Mr. Cheryl Sandberg , Facebook's Chief Operating Officer, had made various attempts by the Cameron Cabinet's Osbourne Finance Minister to concern about GDPR. Mr. Sandberg headed to Davos where the World Economic Forum was held in 2013 when GDPR began to be considered and began building relationships with Mr. Osborne. 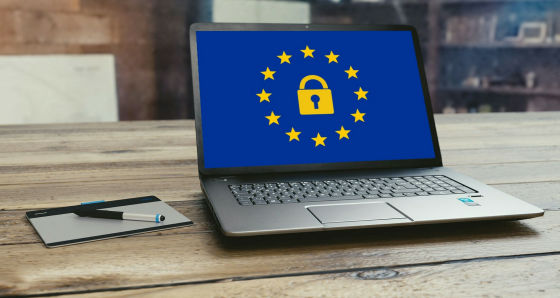 Mr. Sandberg suggested Mr. Osbourn to offer Mr. Osbourn to provide an application building course for children at a school not adequately educated in London and said it was pleased. In a wide range of discussions, Mr. Osborne advised on how Facebook can quickly obtain a visa for employees working in London and asked if Facebook could invest for East London Tech City . In response, Mr. Sandberg said that he could not invest at the moment.

In the internal document, Facebook wrote about Ms. Osborne, "I was able to make more assertive claims and suggestions in discussions on data protection rules". In addition, "It is written that we have influenced the evaluation on the cost of data protection rules, and that" Impact assessment underestimates cost "praises Mr. Osborne's criticism" However, Mr. Osborne said, "As a result of meeting with Facebook, we did not do lobbying in the EU". 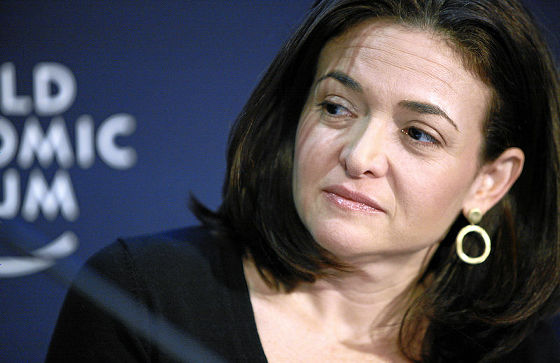 In addition, Mr. Sandberg invited Vivien Redding, who is in charge of GDPR at the European Commission, to a party to promote female executives. In 2013, Mr. Sandberg announced a book on how women work " LEAN IN (women, work, leaders' willingness to work " ), trying to make a connection with Mr. Redding through books I tried it. Mr. Redding thought that the problem of "female leadership" talked about by Sandberg et al. Was "American", but they are noted in the memo that they strengthened the connection.

However, when discussing Redding with data protection rules after that, Facebook received from Indication that Reading said that "Facebook is focusing only on parts that they do not agree". On Facebook, he said, "Although there was progress, it is difficult to create relationships with her, which is not limited to us, she is not a fan of American companies" and concluded It is.

In addition, as of March 2019 Facebook is setting the minimum age for account creation to be 13 years, but Facebook executives also discussed the idea of "Facebook service for children" with the European Commissioner Nelly Cruz It has been. Mr. Cruz is in an "intimate relationship" with Facebook, and he seems to have thought about this idea.

The above confidential lobbying activity centered on meetings at the World Economic Forum held in 2013, but this is just a piece of the iceberg, the U.S. news media The Guardian says. The document also describes activities done in Canada and Malaysia, and Facebook says it has made promises to create new data centers and create jobs to stop legislation.