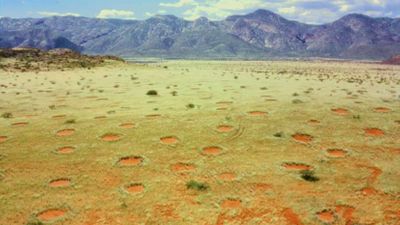 In the Namib desert spreading in the Namibia Republic in the Southwestern part of Africa and in Australia's Outback , a phenomenon called " fairy circles " has been confirmed that the area where plants do not grow spreads like a polka dots. Researchers have proposed various hypotheses about the cause of fairy circle appearance, but a paper was finally presented explaining the mechanism by which fairy rings occur.

Getting to the bottom of fairy circles: Physical processes in the formation of circles - ScienceDaily
https://www.sciencedaily.com/releases/2019/02/190221122954.htm

Fairy circle is a phenomenon confirmed in the area where plants naturally grow, and a circle with a diameter of several meters where plants do not grow at all appears in numerous numbers on the ground. There are folklore among people living in the vicinity of the Namib Desert that "footprints of God" and "dragons that breathe poisons live in the ground". It was a phenomenon that was observed only in the Namib Desert, but it seems that in 2014 the fairy circle was confirmed for the first time in Australia's Outback, and it was found that fairy rings occur even in places other than the Namib Desert. Scientists are challenging the mystery of the fairy ring phenomenon that appears in the Namib Desert for many years, and various hypotheses have been proposed. 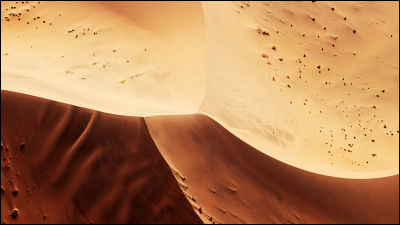 The termite theory and climate theory are considered to be particularly powerful among the plural hypotheses proposed. According to termite theory, fairy rings are said to occur as plants wither by plant roots eat the termites inhabited nearby. If roots are eaten by termites, plants can not absorb rainwater and rainwater will soak into the soil. As a result of this, termites are able to obtain water without being disturbed by plants, termites will gradually expand the range of plant roots around the nest centering on the nest, so fairy rings will be in a circular shape Explanation that it spreads is done. On the other hand, in the climate theory, it is said that fairy rings occur because the Namib Desert and Outback are extremely arid regions with little annual rainfall. In such arid regions, plants compete with scarce water resources and plants compete fiercely, plants that could not get water withered, plants will disappear from that part. Then, as the competing plants disappeared, the plants around it were able to obtain water more easily than before, plants grew so as to surround the plants' non-growing areas and create fairy circles. 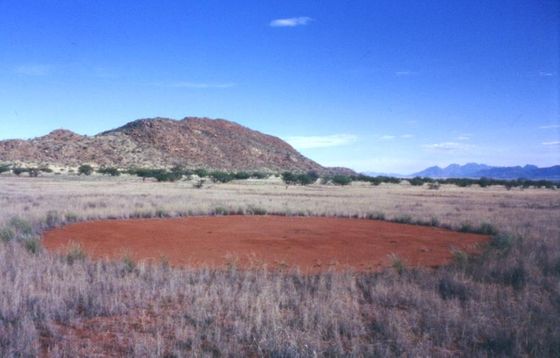 While there are not many proponents of theory that termites are the cause of Sidhe circle, against the termite theory are also opposed opinions that "why the fairy circle disappears after a while" It is. Michael Cramer of the University of Cape Town advocated in 2013 the theory that "self-organized patterns that arise because plants efficiently obtain water with an extremely dry climate are the fairy circle" did. Cramer combined the satellite photos of Google Earth with the soil samples of the land to make a computer model and succeeded in predicting the distribution of fairy circles with an accuracy of around 93%. 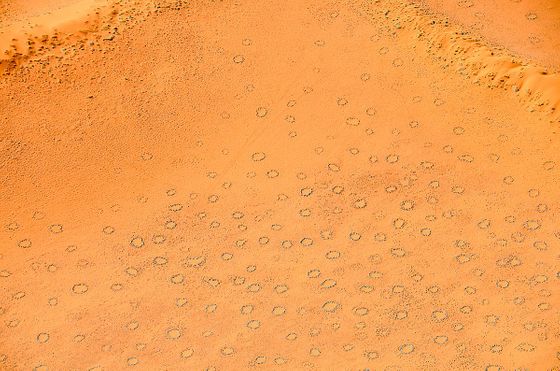 Researchers from Germany, Australia and Israel jointly created a computer model for the fairy loop of Australia in 2016 after the fairy circle was confirmed even in Australia. As a result of the simulation in the model, it was confirmed that "the fluctuation of rainfall" is the strongest cause of the fairy ring, and Cremar's "fairy circle is a self-organized pattern of the plant" It is a result that supports the theory.

In addition, the research team announced the latest research results in February 2019, "Although there is a certain degree of correlation between termite activities and fairy circles, it is true that termites are generating fairy rings "We conclude that competition between plants that is done to obtain extreme drying and poor resources creates fairy circles. Stephan Getzin of Georg-August University Göttingen, a member of the research team, said, "Changes in vegetation caused by termites have occurred near the fairy loop, but the local destruction of termites does not create fairy circles. The relationship between water and plants and soil is creating a circle of fairies. "