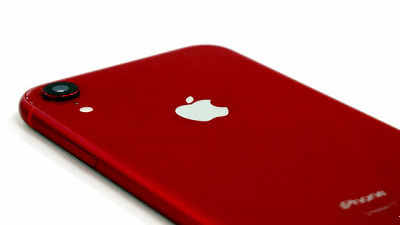 In China, censorships on the Internet are gradually strengthened, such as obliging to write real names in writing to the Internet bulletin board version , SNS is also almost unusable. However, China with a high population and rapid economic development is a market not to be missed as an Internet related company. Google developed a search engine with censorship function for China and many voices of criticism came from within and outside the company when its existence became clear. Like Google, Apple is trying to expand the iPhone and its related services in China, but a site that shows how much Apple is cooperating with Internet censorship in China is released.

"The site that knows how much Apple cooperates with Chinese censorship in China" is the following Apple Censorship. Apple operates the app store "App Store" for iOS devices, but with Apple Censorship you can check what applications are not available on the Chinese App Store. The creator of the site is a researcher at the GreatFire.org , a non-profit organization that monitors Internet censorship by the Chinese government. 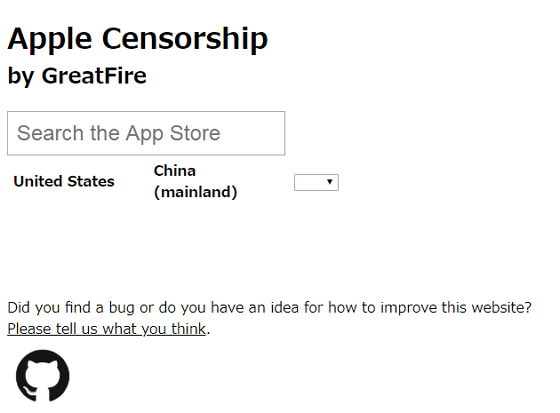 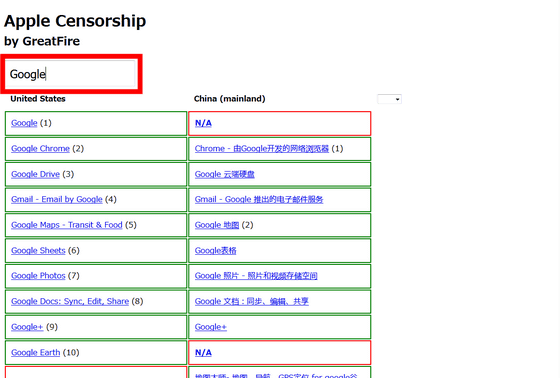 If you click the pull down menu in the red frame part, the country name becomes selectable. Click "Japan" ...... 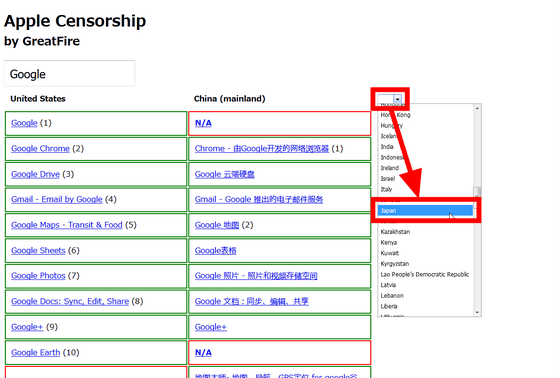 You can also display the data of the Japanese App Store together as follows. 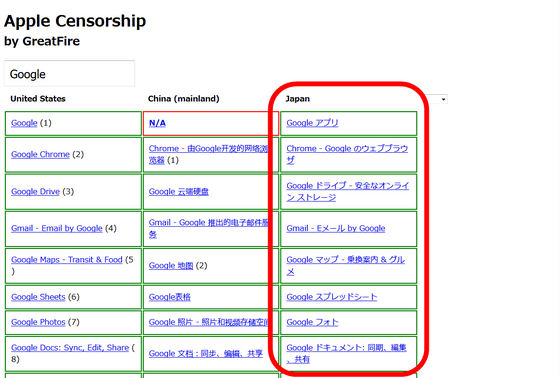 If you check also another application as it is, it turned out that Google Earth is also unusable in China. On the contrary, the application " Yu Zhiqi - Maple, Guangzhou, GPS stereotype for google Utagama map " published by the developer called Yang Zongqun on the Chinese App Store is not available in the US and Japanese App Store I will. 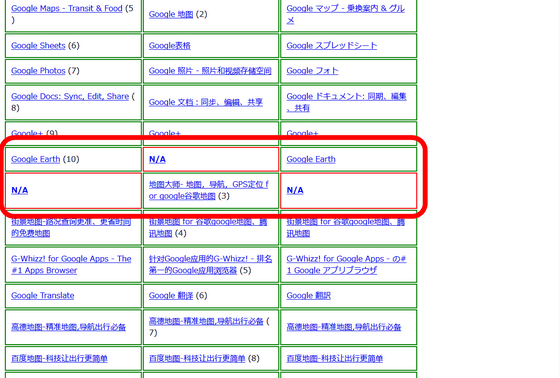 In July 2017, it was reported that Apple decided to delete up to 60 VPN applications from the Chinese App Store . Using VPN makes it possible to protect information from threats such as eavesdropping and tampering of data, that is, it is difficult for the Chinese government to censor the Internet. Therefore, the Chinese government requested the Apple side to stop distributing the VPN application that would interfere with censorship, and the Apple side responded to the request. In addition, eventually Apple acknowledges that it deleted more than 600 VPN applications from the Chinese App Store. However, Apple did not reveal details on which apps were deleted.

In addition to these VPN applications, Apple also blocks downloads from China so that Chinese iOS users can not install applications provided by media outlets such as New York Times , Radio Free Asia , Tibetan News , Voice of Tibet I will. Other tools to avoid internet censors such as Tor and Psiphon are also not available on the Chinese App Store. 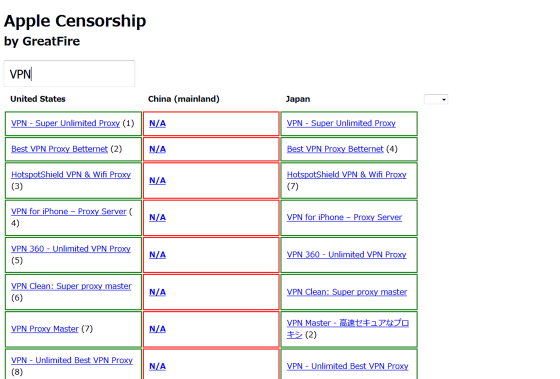 We have reported in the past that the VPN application was removed from the Chinese App Store and that some media companies have become unavailable in China, but other applications are different. Charlie Smith, cofounder of GreatFire.org, told The Intercept , "Apple does not ensure transparency about censorships on the App Store, most developers themselves We noticed that something has happened since we confirmed that the traffic from China has declined and we want to bring transparency to censorship by Apple. "About the process of opening the site I am talking.

Radio Free Asia, funded by the US government, regularly reports on human rights violations in China and has been caught on censorship in China for decades. Radio Free Asia 's broadcast in China has been hindered since the late 1990s, and its censorship has reached the Internet, and now it has spread to applications through Apple support.

Libby Liu representative of Radio Free Asia says, "Closing the means used by trusted external news organizations leads to great losses, not just losses for us but information from state-owned media It can be a loss for millions of people relying on our coverage and up-to-date information.When making decisions that could affect access to the information, I am hoping to commit to the values of the people. "

Apple spokeswoman commented, "We must comply with all legal requirements at any place where applications will be available." In addition, Apple plans to release information on the request from the Chinese government to "remove the application from the App Store" in the next report on transparency. 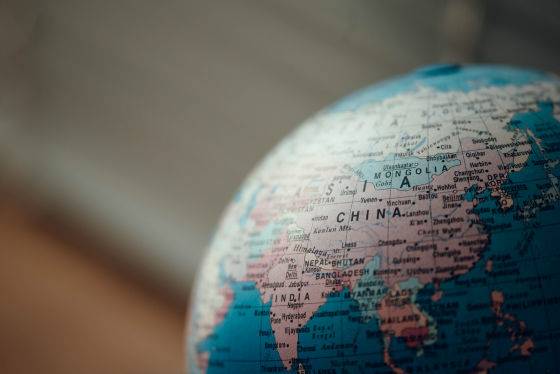 China, with more than 800 million Internet users, hopes that companies will take government demands instead of allowing Western companies in Europe and the US to provide services in the huge Chinese market. And this request includes compliance with the Internet censorship and monitoring of the Chinese Communist Party. In recent years, China has gradually strengthened its pressure, and with the introduction of a new data localization law, "China's Internet companies offering services must store user data collected in China on mainland China" have become. It is said that the Chinese authorities have become more accessible by the public data.

In accordance with the data localization law, Apple has signed a contract with China Telecom , a state-owned enterprise in China, in order to manage iCloud data of Chinese users. Apple maintains control of the encryption key on the data and claims that the government will not be able to access the user's photos and other personal information, but human rights organizations are still concerned. 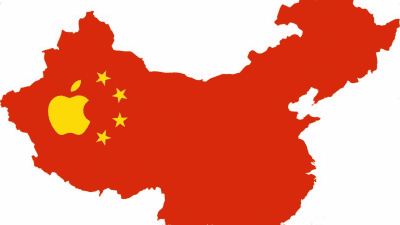 Apple's CEO Tim Cook expresses himself as a "user privacy guardian" and talks that "privacy is a fundamental human rights belief that Apple believes," Apple's response Looking at it seems that we have accepted a compromise plan "to allow government censorship in China".