What is 13 items summarized by Sam Altman, the president of Y combinator, 'How can I succeed?' 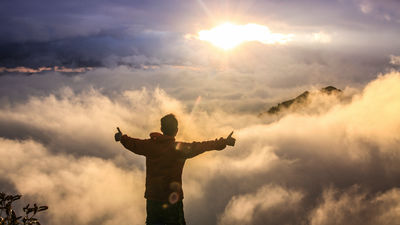 Sam Altman of startup investment / support company " Y combinator " who has seen numerous entrepreneurs, 13 th item is released in blog by what kind of thing is necessary to succeed .

How To Be Successful - Sam Altman
http://blog.samaltman.com/how-to-be-successful 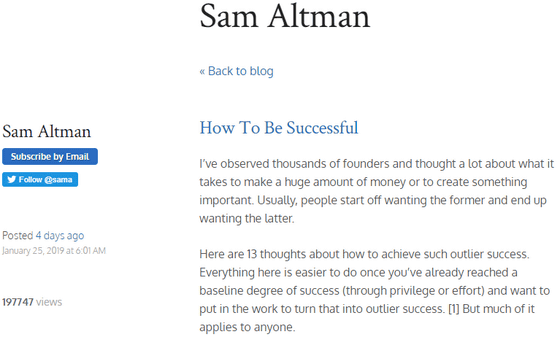 According to Mr. Altman, many people firstly ask for "money" and eventually "I want to produce something important". It is not easy to get both of them, but if we meet the following 13 items summarized by Mr. Altman who has seen the success and failure of many entrepreneurs so far, it should be closer to achieving the goal.

◆ 1: Make yourself "complicated" <br> Although many carriers will progress fairly linearly, it is exponential curve to generate wealth, so to proceed with a carrier with compound action Is important. As your career progresses, you should allow your unit of work to produce more results.

◆ 2: I have confidence to excess, "confidence" is very powerful, people succeeded who Mr. Altman knows believed in himself enough to think that many are delusions. For example, Mr. Mr. Mr. mask talking about launching a rocket to Mars when Altman gave Mr. Eulon Mask a factory of SpaceX several years ago seems to have had absolute confidence.

However, it is also necessary to balance with self recognition at the same time. Mr. Altman himself used to avoid listening to criticism, but in order to separate self confidence and self-deception, even under the premise that "criticism would be true", take care that the ear is painfully It is said that.

◆ 3: Learning to think independently It is "ingenious thinking" that you do not teach at school though you need it as an entrepreneur. Even Mr. Altman says that it is difficult to teach and you need to master it yourself.

One of the most powerful ways to cultivate thinking is to think about how you can solve a situation that seems to have no solution. A " grit " (the ability to pass through without difficulty) that most of successful people possess is born from knowing that even if it is overcome with difficulty it will stand up again.

◆ 4: Sales successfully <br> To succeed you need to convince other people not just "believe themselves" but also what they believe. In other words, it needs to be "good at sales". Sales need evidence that there is an inspiring vision, strong communication skills, some degree of charisma, ability to do. And the best way to increase sales is to truly believe the value of what you sell.

◆ 5: Dangerous bridges are crossed <br> Many people overestimate risks and underestimate their rewards, but it is impossible to do "always right things", and "where to take risks" It is important. I need to try a lot and learn a lot and adapt quickly. ◆ 6: Concentration - Many people take time to be unimportant, but the successors Altman has seen have spent time "thinking" what to focus on " It seems he was. In other words, it is more important to "work on what to do" than "work hours".

◆ 7: Work diligently <br> To do a lot of work is a big trade-off with something else in your life. "Work is moderate" is a reasonable choice, but extreme people get more extreme results, people who work harder gains momentum, success becomes a success I will.

◆ 8: Be bold - people feel that people who work as part of exciting things are more important than working on part of something they are not. If the problem to be addressed is important, a steady stream of wind will blow from those who want to help it. Things that I thought were exciting for someone else would seem exciting for others, so I should tackle what I really want to do.

◆ 9: Selfish Whilst accepting as it is thought that it seems difficult for many people to "bend" the world as you think, surprisingly "can be bent" It is Altman 's claim that it is things.

Even though people have the ability to wake up something, they are not confident and give up so quickly that they have closed their possibilities themselves. So we will continue until this goes well, pushing back on the back that we can overcome any challenges and lead to success.

However, in order to be selfish, it is necessary to be optimistic, but it seems that optimistic viewpoints can be worn by training. By the way, Altman said that he had never met a pessimistic and successful person.

◆ 10: I can not compete <br> Many people think companies that are not competitive can be valued companies. This is an important truth, and it applies to entrepreneurs as well as companies. If things that others can do are what you are trying to do, you can not produce too much money.

◆ 11: Build a network - Even if there is a part I am not good at, I do not necessarily want others to be weak, a team is necessary to accomplish a wonderful job. The ties with talented people are the limits of what they can accomplish as they are.

An effective way of building a network is to help as many people as possible. Mr. Altman seems to be surprised to come back here after having helped someone more than 10 years ago.

◆ 12: Become affluent by owning "goods" <br> Mr. Altman seems to have misunderstood when he was a child, as people get high income if they become wealthy. Actually, looking at the Forbes' s chief ranking number, there is no one like the top ranking because of the high salary, except for those who are like celebrities. To become truly wealthy is to possess "goods" whose value improves. "Mono" refers to business, real estate, natural resources, intellectual property, etc.