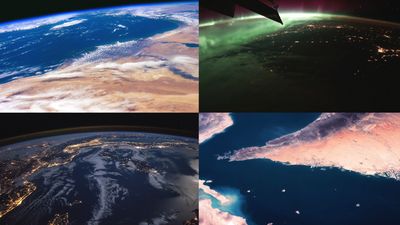 The scenery that we see in everyday life is mostly the one that saw the state of the vicinity from the height close to the ground. Even if you go up such as a high tower and look down on the world, it will be several tens to hundreds of meters high, but an incredibly beautiful time lapse movie shot of the earth from space has been released at Vimeo.

The World Below: Time-Lapse | Earth 2


Flying above the earth, floating in outer space is the " Kotonori No. 4 " which is a Japanese space station replenishment machine.

Subsequently, the camera captured land covered with snow and a huge river. The picture was taken from the International Space Station .

In the shot that captured the earth where the cloud spreads, you can see the roundness of the earth.

The shadow of the cloud falling on the sea surface can also be seen from outer space.

The contrast between the clouds floating in the sky and the blue sea is beautiful.

The other side of the earth is the moon.

Looking down from the place where the ground can be seen directly, the part depressed by the flow of river and water, the raised part looks like lightning bolt or vein.

Depending on where you look, there are also scenes that looks like a different planet.

It is the tip of the Arabian peninsula that protrudes in the sea. You can check The World , an artificial island in Dubai .

The clouds like cotton candy are scattered on the sea and the island that changes color depending on depth.

Scenes where clouds spread along the coastline were also included in the movie.

The scene where the evening glow of orange sunset is reflected in the sea in the evening on the ground is very fantastic. You can see at a glance from the orange in sunset to the black like the inhale of the universe.

The left side is the night time zone, and when you look closely you can check the light of the city with the lighting in preparation for the night at the bottom left.

I saw a mysterious aurora on the Earth of the night.

As the waves swell, the aurora changes its appearance.

And the light of the city blinks on the land as if it traces its shape.

In places where cumulonimbus spreads, contrast between night scenery and thunder is also beautiful.

If you look closely, the light of the land spreads as if you trace along the river, you can see that the city is developing in the river basin.

The city and the city are connected by thin lines of light and constitute a network, it looks like a sparkling firework.

Even if the land is covered with clouds, the light of the city can be seen from the gap.

Landscape of the earth, the light along the coastline, and the clouds flowing over it seems to be seen from outer space.

From the other side of the earth wrapped in the night ......

In this way another day of the new earth begins again.