What is the difference between 'just being alone and reassuring the surroundings'? 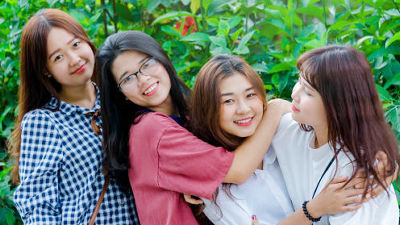 If there is a person saying that "People feel comfortable only by coming into the room," there are people who do not do anything but people who feel frustrated and uneasy, and psychologists I am studying this influence as "Affective Presence". Even if the person personally has sorrow and anxiety, how is a "positive emotional existence" that raises the performance of the team by giving a good influence to the surroundings is created, the Atlantic It is revealed in.

'Affective Presence': How You Make Other People Feel - The Atlantic
https://www.theatlantic.com/family/archive/2019/01/affective-presence-how-you-make-other-people-feel/579643/

The first thing mentioned about "emotional existence" is Noah Eisenkraft of the University of North Carolina University Kinan Flagler Business School and Hillary Anger Elfenbein of the University of Washington Olympics Business School. Researchers divided the students of the business school into groups and let them go to the project in the same class for the first semester. At this time, the members of the group are asked what kind of feelings other members feel about themselves as "stress", "boredom" "anger" "sadness" "calm" "relaxed" "happiness" "passionate" 8 I rated it with one emotion. As a result of the investigation , researchers indicated that most of the emotions of group members can be explained by "emotional presence" of other members.

What this means is that, for example, when one of them has anger, that one "infects" anger with someone nearby. Moreover, at this time, "positive emotional existence" has a positive influence on the surroundings even if the person has sadness and uneasiness as an individual, and conversely "negative emotional existence" I found that it affects the surroundings negative regardless of emotions. Not surprisingly, research showed that people who feel good about people around them are located in the center of social networks. Many of our classmates regard such people as friends, and in other studies it has also been shown that they are more likely to be loved.

Hector Madrid, Professor of Organizational Behavioral Sciences at Pontifical Catolica University, has investigated how much leaders who are "emotional" influence the performance of the team. According to Madrid's research, teams with leaders who give good feelings to team members have improved performance in terms of information sharing and are more prone to innovation. Under these leaders, team members tend to issue their own ideas, they are said to be telling their thoughts to the leaders.

"Saying outstanding ideas will end up breaking the status quo, so in a sense there will be danger, because we do not necessarily need to say such ideas, so in order to emit ideas we need to feel" safe " There is a positive emotion in this regard, "Madrid said. Although it has not yet been clarified what exactly people have confidence in the surroundings, researchers believe that body language, voice tones, or listening power are involved. Madrid said that future researches will reveal that people who are strongly emotional existence and weak people exist regardless of whether they are negative or positive. Both Elfenbein and Madrid think that the strength of the influence of emotional existence is strongly related to the ability to control oneself and other's emotions.

Emotion rises once a day in one day though irritation, shaking, and sadness, but controlling it and not affecting correspondence to others means "control of emotion" To do. People who can successfully control their emotions can positively influence people even in bad situations, but on occasion they also suppress their emotions for others' comfort.

Elfenbein also mentions that positive emotional beings are not inherently good for themselves. Psychopath behaves well to manipulate others and uses positive emotional existence. Likewise, negative emotional presence does not necessarily have a negative effect on leaders. This is understandable if you imagine that a football coach reprimands players at half time and motivates them. Elfenbein considers that the emotional existence is closely related to the mental intelligence index and stated that it can be used for good impact or for crime.