'Spiritual' something 'looks like yourself comes to kill you' Us 'trailer 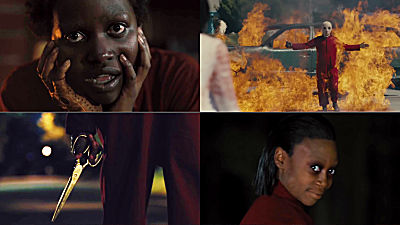 A trailer of a horror movie " Us " has been released that "something" with exactly the same appearance and the same idea as yourself and family comes to kill. Us holds a directive debut with the horror film " Get Out " of 2017, the movie is the first appearance of the weekend box office revenue ranking, the second horror of director Jordan Peale who received high evaluation from the critics.


A car running in the forest.

What is inside is a family of two couples and two couples. My father's role is Black Panther and Winston Duke of Embaku role and mother role is Rupita Nyongo .

The family arrived at the beach side in California. It seems to be a plan to spend the summer where Adelaide her mother spent his childhood.

However, Adelait realizes that the son / Jason's appearance has disappeared.

Jason walking on an unmanned beach

The hand of a person standing in front of that gaze is bloody.

Jason was safely found, but a bloody man remains a mystery. The family will have a night as if nothing happened ... ...

Outside the house is the appearance of "something" that clasped the scissors.

Midnight, Jason came to tell my parents "Someone is outside."

"Maybe, it will be my neighbor's family," Gabe, the father, goes out with "Were you something?"

Tell the children "just put on your shoes" just as Avigade realized something.

A moment when Gabe told "With something motivated you will become a partner" with a metal bat ......

Families who were standing upset apart. A person who is seen as a "father" is approaching.

And for some reason, the four people stay in the living room as if they were in their own house.

The figure of an unknown mysterious family ... ...

It is seen that it was Adelaide when he was young who came to the amusement park.

Here Adelaide is likely to be killed by a person who is exactly like him.

It seems that the person at that time appeared again.

Children wrapped in flames stand up.

Someone who was murdered at the beach.

A child who took the form of Adelaide when he was young.

I will be forced to choose between killing them.

The moment of confrontation

The two boys seem to be connected.

In addition, Us is scheduled to be released nationwide on March 15, 2019, and it is undecided on the disclosure in Japan.