"Tiktok" is an application that can combine music into a short movie of 15 seconds taken and share it like SNS. In June 2018, it recorded about 150 million active users, boasting explosive popularity, especially in young people in Asian countries such as Japan and South Korea. Motherboard points out that Neo-Nazi, which is a discriminatory force forces, gradually extends the scope of activity to such TikTok. 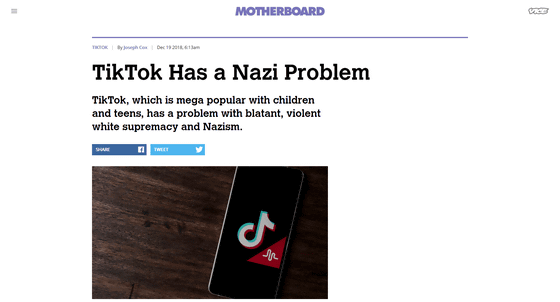 Neo-Nazi preferential treatment of specific ideas and races, dealing with others, and promoting violent and radical demonstrations is a dangerous place in the world, gradually transferring its scope of activity to the Internet. However, Neo-Nazi, a discriminatory force, is excluded from major SNS platforms such as Facebook, Twitter, YouTube and so on, so it is said that other SNS such as Google + is requesting an activity place. Also, it is reported that some Neo Nazi are attempting a project to unify online neonachi activists on their own social network and to form a huge armed fascism organization. Motherboard points out that Neo Nazi that came to be rejected not only from real society but also from major SNS reached as one place of new activity is TikTok. According to Motherboard, it is said that an account to post movies claiming that "certain races and ethnic should die" was found in TikTok in minutes. Not just insisting on those accounts, it seems that there were several things showing Nazi salutes in movies.

Also, some accounts discovered by Motherboard said that they called "Race War Now" (Race War Now). In another account, it seems that he was appealing for support to Neo Nazi organization 'Atomwaffen Division'. Atomwaffen Division is a radical extremist who is believed to be involved in a case that killed two Jewish students, in February 2018 it deletes a lot of propaganda movies as being in violation of YouTube's policy, The Discord server with Judaism · Caucasian supremacy is also closed. And especially commonly seen in Neo Nazi posting is the hashtag "# FreeDylannRoof". This hashtag appeals for the release of White supremacist Dylan Roof , who killed nine people by shooting guns at the Black Church in Charleston, South Carolina in June 2015. 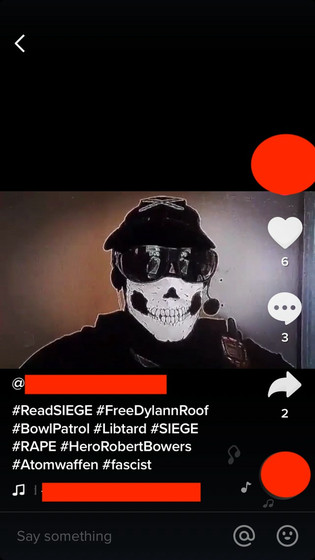 Uploading "racist or discriminatory content including discrimination based on race, religion, age, sex, physical disability or sexual orientation" is prohibited in TikTok's terms of use, but Motherboard It seems that the Neo-Nazi account discovered by the company still continues activities without being deleted.

Heidi Beirich, Intelligence Project Director of the South Poverty Law Center , said, "I have not told the TikTok side about the interview with Motherboard, but TikTok needs to sweep those discriminants right away. I did not think of the worst thing to show the content including Neo Nazi's assertion to children on TikTok targeted to "Target".

Also, Caroline Sinders, Digital HKS researcher who studies online extremists, "It does not matter whether it is an Internet-meme culture joke, I think that it is necessary to summarize platform policies on harassment and hate speech For me, the word "kill black people" is nothing but a joke, it's just a hate speech. "