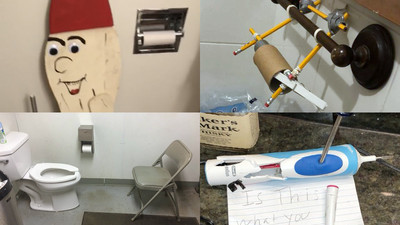 According to the survey result of the Japanese Toilet Research Institute in 2017 (PDF file) According to the survey results , it is found that there is a gender difference for each toilet problem, and women are more interested in accessories and toilet paper than men It seems that it tends to be higher. Meanwhile, jodie asked the woman of the world on Twitter that "The most strange thing you saw in the restroom of a man 's house?", As of the article creation, more than 12,000 retweets and 5 Collecting more than 10,000 goods, various toilet images gathered from the placement of toilet paper which is too complicated to the unintentional decoration, which is a topic.

The image actually tweeted by jodie is kore. The rubber cup pattern has a cush that fixes hair for some reason is fixed with tape. It may be useful when you want to set your hair while correcting a clog in the toilet, but that opportunity seems to be quite difficult.


ladies what's the weirdest thing you've ever found in a boy's bathroom? allow me to start pic.twitter.com/WbvwM86H4b


◆ How to place toilet paper <br> Big Buddha and ornamental plants, candles and toilet paper. It is a way to feel wabashi but it seems like it is offering toilet paper to a great Buddha.


I use the signboard of the contractor piercing the pylon for road construction instead of the toilet paper holder. In the first place it is a mystery why pylons and signboards are in the toilet, where they are brought from.


Was touched the trouble of exchanging toilet paper, or toilet paper cluttered chilly on the core of empty toilet paper? A further look closely shows that the shaft of the holder is a toothbrush, there are too many Tsukkomi places.


If you do not have a toilet paper holder, just to make it, holders made with pencils, washing clothes and duct tape are this. I can feel a little DIY spirit, but also raises the question that there was another way to do other things.


It is no longer a novelty replenishment method that even ignores the concept of "passing the shaft through the core of the toilet paper". We are thoroughly crushing the benefits of toilet paper "Use the necessary amount of paper to wind up".


this was the only toilet paper the bathroom had ???? pic.twitter.com/Vyhkhu5w56


◆ A number of items that are always in the toilet <br> <br> <br> <br> <br> Toothbrushes worn out until they are tattered. More than half of the hair of the toothbrush is no longer being lost. It is unknown whether the teeth are properly polished with the crushed toothbrush so far.


It was posted with the tweet "What is this?", A beer empty beer stuck with a toothbrush stubbornly stuck. Whether it was a waste of time to buy a toothbrush stand, its appearance is still a beer can, but from the place where the edge part is folded inward, you can feel a delicate feeling that "you will not be hurt".


What was in the man who was using The figure of the electric toothbrush which was destroyed by the beakkaki and the plus driver stabbed deeply, with the message "This is what you wanted". Despite trying to repair, did not it go wrong and got despised ...?


A folding chair placed in front of a toilet bowl. Perhaps it is equipped with a tweet called "guest seat", it may be a facility that assumes a situation where customers will be in a toilet in use.


There were many very unfriendly men saying "to eat while adding" or there were cases where the toilet was regularly standing for food or leaving it abandoned. Marshmallows and cereals are always in stock in cupboards where toilet paper and detergents are kept in place.


Went to look in the bathroom cupboard for toilet paper and ... pic.twitter.com/UAPPHJcesu


To prepare breakfast while adjusting the dress during the busy morning, a large bottle of bread and jam is placed on the sink.


In the image below, the crab's claws are left on the sink for some reason. If it is not the situation that "the face was washed while eating a crab", the explanation that the crab's nail is placed is unlikely, but the truth is a mystery.


◆ Decorative too unique <br> Some people put posters and dolls to decorate mineral toilets even more. For example in the image below, the female model gravure is cut from the magazine and pasted on the wall of the toilet. Because the female model is pointing the camera to here, it seems like it seems to be filmed on the way while adding it.


I put a picture of John · F · Kennedy , who served as President of the 35 th US President, in the picture frame and decorate it in the toilet. The owner of the toilet may be a fan of Kennedy.


A framed photograph of JFK pic.twitter.com/Fe8rV6hhn 5


Also, some people decorate sculptures with high artistry. According to Alexis who tweeted, this work placed in a corner of the bathroom seems to have been called by the user "The Mother". Although it is a sculpture with a majestic atmosphere, it has been left untouched clothing off the feet.


The weirdest part about this was they referred to it as "" The Mother " pic.twitter.com/JUkISDLfz 6


The large print on the shower curtain of the bathroom is the face of actor Nicolas Cage . Nicolas · Keiji gently smiles at the side beside adding a special space for an unbearable space.


A handmade signboard is placed next to the toilet paper. It looks like a design imitating a peanut, but it is unknown what the character is.


At the moment when I borrowed a toilet at a man 's house and opened the door, I thought that if you think that "a barbie doll is bound up and fixed to the picture frame and the pasting decoration" jumps into your eyes, there is a fearful thing. From the person who saw the image, I got a comment saying "In the house of the serial killer?" "I remembered the bad kid in the " Toy Story " .