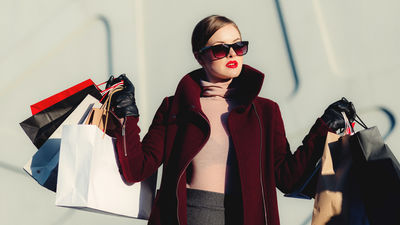 In the fashion industry where various brands are sharpening out, there are famous enterprises that carry out a number of international developments. However, in the fashion industry where such overseas expansion has become common, it is reported that the structure that "a handful of companies account for the majority of the profit of the entire industry" has been completed.

The State of Fashion 2019: An 'Urgent Awakening' for the Industry
https://www.businessoffashion.com/articles/intelligence/the-state-of-fashion-2019

Zara, Nike, LVMH, and the handful of other brands making nearly all fashion's profits - Quartz
https://qz.com/1485141/just-20-fashion-companies-are-making-almost-all-of-the-industrys-profits/

McKinsey & Company, an American consulting firm, analyzed over 500 fashion companies across different price zones and regions. As a result, it was found that the top 20% of companies in the year 2017 raised " 128% " of the industry's total profit.

Perhaps there are wonders why the situation of "raising profits exceeding 100% of the whole" can actually occur. However, according to the survey report, this phenomenon seems to have occurred, "The 20% of companies in the industry have lost 34% of the industry profit in 2017". McKinsey says that the polarity of the profit generating side and the loss producing side are advancing in the fashion industry.

20% of the top 20% of the fashion industry still includes 100 companies, but as McKinsey further narrowed down to the "top 20 companies in the industry" it is obvious that it raises 97% of the profit of the entire fashion industry became. Industry-wide profits accounting for the top 20 companies exceeded 100% in 2008, but declined sharply in 2009. However, it has continued to rise almost as soon as again from 2010. 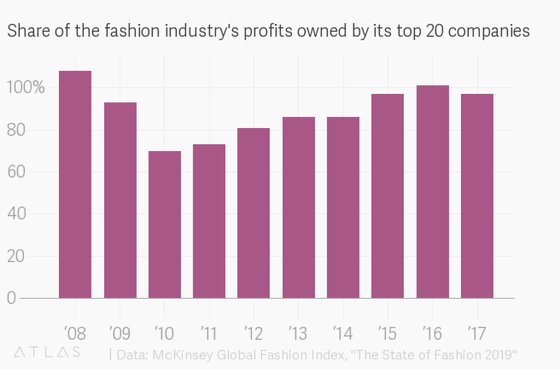 On the other hand, it seems that there is a common point to these top companies in that "profit is prohibitive compared to other brands, but sales are not large, but instead profit in sales is large". Companies in the fashion industry are profitable by maximizing the scale of the company and maximizing development costs while lowering manufacturing costs to the fullest extent.

In addition, 12 out of the top 20 companies in the industry have not changed for the past 10 years since 2008, and consistently continued to reign in the top fashion industry. McKinsey says that these companies are investing heavily in building brands and maintaining a sustainable management model. For top 20 companies, FAST RETAILING (13th place) which develops UNIQLO in Japan has been named. 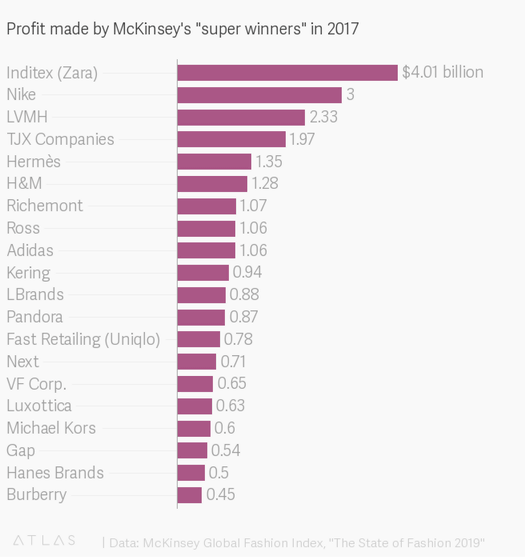 Another statement McKinsey says is "While high brands and low-priced brands will grow in 2019, brands located in the middle will have low growth". McKinsey points out that there is a possibility that not only polarized upside of the industry and lower polarity but also the target itself of the fashion brand will become polarized. 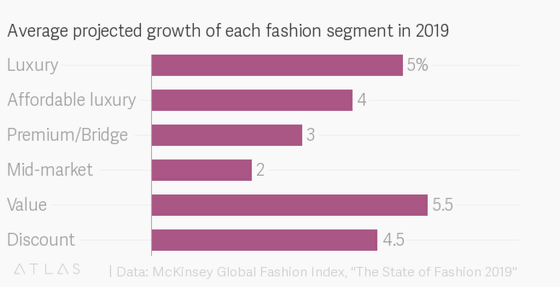