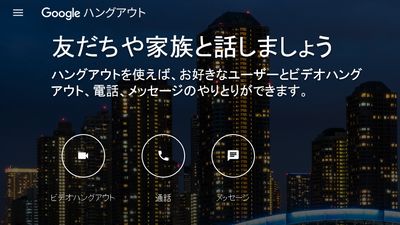 
"Hangout Chat" and "Hangout Meet" are services in Google's business-improvement productivity tool " G Suite ". Hangout Chat is a service that provides a messaging platform for teams, each chat room supporting up to 8000 members. Meanwhile, Hangout Meet is a business-use conferencing tool that allows you to make video conferences with a member in a remote location.

According to Johnstone 's remarks, Steven Hall , Editor - in - Chief of 9to 5Google said, "We've been using Hangouts that have been used for regular users in Hangouts Chat and Hangout Meet for enterprise products that have distinct needs How do you migrate? "Asked more detailed explanation on Twitter.


Hey Scott, will update my report, but I stand by my sourcing. Would you be able to elaborate on exactly how legacy Hangouts users will be "upgraded" to Hangouts Chat and Meet, since those are entirely separate enterprise products that fill different needs?


In response, Mr. Johnston calls Hangouts Classic as "Hangout Classic", "Although it will definitely end Hangout Classic, it will not support features such as product messages and video calling There is nothing. "


2 / So while that will result in the eventual shut down of Hangouts classic (as we now call it), it does not imply we are ending support for the supported case supported by the product: messaging and meetings.


3 / As per your comment about the products being "entirely separate enterprise products," this apps are used, consumers, enterprises, schools, governments, and the like.


However, at the end of the tweet, Johnston acknowledged that his claim can not be completely objective, "Hangout is my product and my argument is strongly biased." It is. And he said that he is not Hall or Johnstone, but a user of Hangouts to make a final decision on a series of events.


Everything else is just talk. / FIN It's my end, neither you, nor I will make this judgment.