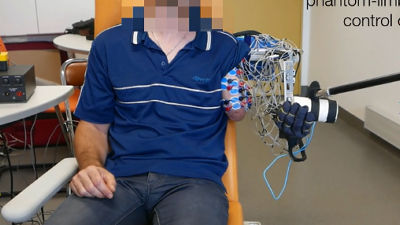 75% of people who cut their limbs feel that there are missing limbs and feel like moving it. Therefore, researchers at the French National Center for Scientific Research (CNRS) and AX - Marseilles University collaborated with clinicians to develop a robotic arm that detects and operates phantom limbs.

Movement of phantom limbs such as "pinching with fingers", "making a fist" and "turning a wrist" are related to the contraction of certain muscles remaining in the body. Researchers created algorithms to detect the movement of muscles caused by such phantom limbs and made it possible to reproduce the detected motion by the robot arm. The robot arm does not need surgery for wearing and can be controlled intuitively.

Experiments were carried out in such a way that the subject did not wear the robot arm but the arm was placed near the cut arm. Two subjects controlled the robot arm after practicing just a few minutes and said that the task could be executed.

The state of the actual experiment can be seen from the movie on the following page. The upper arm of the subject, the part which was avoided from cutting, and the robot arm are connected. Slowly the robot arm hits ... ... Add hands to things like a cylinder and slowly grasp it from the index finger. Then remove it from the bar that will support the tube ... ... I dropped it in the pot and the case. Researchers are working on research to install robotic arms in the future. On the other hand, researchers have indicated that the mechanism of phantom limbs has not yet been elucidated and basically it is necessary to reconsider the present evaluation which is regarded as "bad thing".