The full-feature version 'Photoshop CC' that can use PSD for iPad is released in 2019, the movement of the prototype is like this 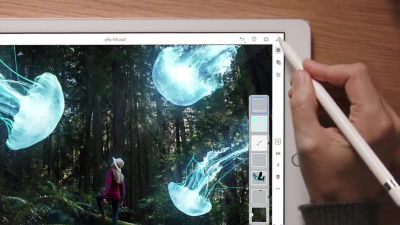 Adobe announced that it will release Photoshop CC specialized for iPad in 2019 at Adobe MAX 2018 , a developer conference held in Los Angeles, USA. Full function version of Photoshop CC which released all functions will be available on iPad.

Adobe has officially announced that it will release the full-featured version of Photoshop CC available on the iPad in 2019. So far, there are Photoshop Mix, Photoshop Sketch, Photoshop Fix, Photoshop Express available for Photoshop that can be used on the iPad, but both have the drawback of being able to handle "PSD files" in any position as a simple version that selects functions. did. On the other hand, Photoshop CC specialized for iPad released in 2019 can fully utilize desktop version tools and workflow such as retouching, compositing, spot repair, drawing mode. Layers and resolutions are also the same, Adobe says "PSD is exactly the same whether you work on the desktop or on the top of the mountain." The image that the full-function Photoshop CC moves on the iPad looks like this.


According to Adobe, about 18 months ago, two Photoshop engineers proposed the crazy idea of ​​"running real Photoshop code on iPad" was the reason for development. Scott Belsky, Chief Product Officer, gave a go - sign to realize the idea, and the project started. The design team inspired by the idea began reconsidering the UI of Photoshop, and in a few months it seems Photoshop to launch on the iPad was born. 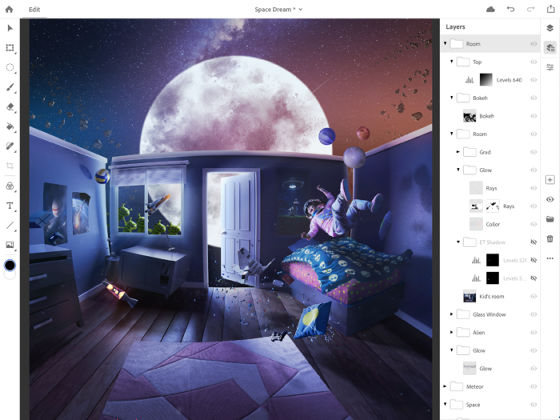 Complete Photoshop CC for iPad that can handle PSD files Naturally you can seamlessly synchronize your desktop and iPad work. It is possible to use "start working on the desktop, work on the go, sit on the sofa of the house and finish it up". In addition to tools familiar with the desktop version, Apple Pencil and touch operations are possible, there are advantages unique to the iPad version such as portability. UI such as layers and various tools are optimized according to the touch screen. 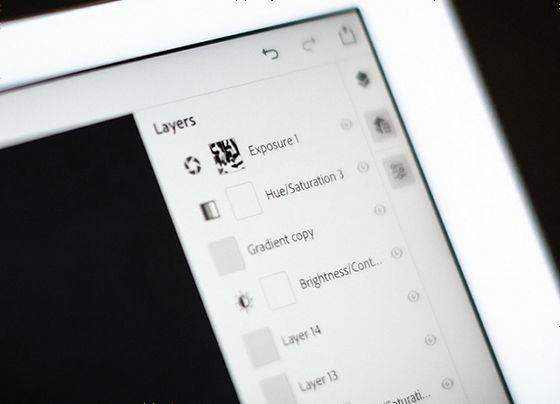 I already touched the Photoshop CC for the iPad that The Verge is developing.

You can see how to operate with the following movie.


In the Photoshop CC for iPad, a tool called "touch modifier" seems to be displayed at the bottom left of the screen, and there is a unique UI that increases the UX of the iPad. According to Adobe, we are planning to incorporate keyboard shortcuts and gesture controls in the future as well. Adobe MAX 2018 only announces that full-featured version Photoshop CC for iPad will be released in 2019, prices and purchase models are unknown. As Bolsky says, "All products must be multi-surface systems", Adobe seems to be moving in a direction to remove the barrier between the desktop and the mobile terminal. Therefore, there is a possibility that the UI assuming touch operation of Photoshop for Android and Photoshop CC for iPad may be applied to Microsoft Surface.