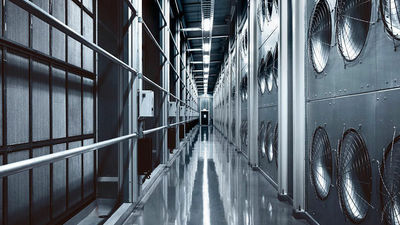 A large computer company such as Microsoft · Google · Facebook operates a huge data center. In data centers with large numbers of computers and servers, the problem of "cooling" is important, and it is built in places where cooling costs are kept low even a little, such as the seabed, river, and Arctic region. We are commenting that Santa Fe Institute, a non-profit organization founded in the United States, is working on these thermal problems.

Microsoft announced that it built a data center in the sea off Scotland in June 2018. This data center is a server rack with 864 servers and 27.6 petabytes of storage placed in a sealed metal container and submerged in the ocean floor. One of the reasons Microsoft built a data center on the ocean floor is that the data center at the bottom of the ocean can cool the server at a lower cost. It is said that approximately 5% of American energy consumption is used to run computers, but most of this energy will eventually be converted to heat. Therefore, when moving a large number of computers and servers like a data center, it is necessary to strive to prevent the machine from being broken by enormous heat energy, and its cooling cost is a magnitude that can not be neglected at all.

The problem of energy consumption by a computer is not limited to an artificial digital computer. For example, the human brain is also a type of living computer, it is said to use approximately 10 to 20% of calories consumed by humans. However, the human brain is much more thermodynamically efficient than an artificial computer, and as long as it is healthy, it will not cause thermal runaway. In the current evolution theory, Santa Fe Institute points out that there has been little explanation on the thermodynamic consequences of "how the human brain got excellent efficiency".

The Santa Fe Institute says that the theory to accurately calculate the thermodynamic cost of such a computer has been established relatively recently. With the further development of information thermodynamics, Santa Fe Institute commented that the analysis of the thermodynamic cost in biological systems such as the human brain advances, further commenting that the next-generation computer design and development will be more advantageous.