PlayStation Classic 'which made the size of the playstation small is decided to be released, 20 nostalgic titles such as FFVII International and Wild Arms can be played at once 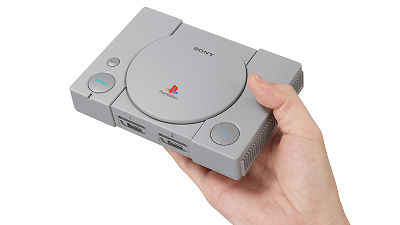 " PlayStation Classic " which made compact the game hard "Playstation" which was released in 1994 and produced a lot of masterpiece games by about 45% in aspect ratio and about 80% in volume is finally appearing. "R4 RIDGE RACER TYPE 4" "JumpingFlash! Aloha Baron Funky Battlefield Volume" "Final Fantasy VII International" "Wild Arms" and 20 masterpieces games including 9980 yen tax excluding tax It will be released on Monday 3 (Monday).

A movie announcing the recorded title etc. is released, and by seeing below you can understand what kind of game machine PlayStation Classic is.


In addition, PlayStation Classic is released on a limited quantity from December 3, 2018 (Monday), and the suggested retail price is 9980 yen excluding tax.