Why do people do farts? 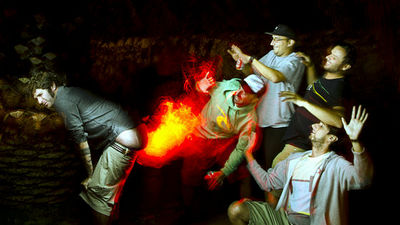 by CHILDREN OF DARKLIGHT [DKL]

The farts are physiological phenomena, and the fact that you are fond of farting itself is not strange. Still, there are a few scenes that become a feeling of grudge "why you want to farte at this timing." The Conversation explains the cause of such farts and the amount that farts are made.

Health Check: what happens when you hold in a fart?
https://theconversation.com/health-check-what-happens-when-you-hold-in-a-fart-98310

There are many people who are embarrassed to have faced with farming in front of people, but when they have to endure farts, they feel uncomfortable in the abdomen. When the gas accumulates in the intestines, the abdomen expands, some gas is absorbed by the body and is discharged from the lungs, or it is said to be forcibly released from the intestine by becoming an intolerable intense fartale.

Farts are said to occur mainly in the process of digestion of the food intestine. Intestinal bacteria may ferment and decompose food, and gas is produced in the process of fermenting food in the intestine. As a result, it is inevitable that farts are made as people eat food and lose their gas by either pouring gas out of the mouth or out farting from the anus. In addition, it is said that the farts will be easier to come out, as the air pressure is lower in the passenger cabin than usual.

In addition to being made by intestinal bacteria, farts are produced due to various factors such as swallowing air, stomach acid mixed with bicarbonate in the small intestine to generate carbon dioxide. It is also known that if farts are made in excess, it is known to adversely affect health, and in addition to being stomach and feeling pain, it seems there is a possibility that the stomach may ring. Because the subjects dislikes the researchers are faced with faults of farts, it is difficult for researchers to research farts, but once 10 healthy volunteers cooperated , the experiment of " measuring the amount of farts made on the day " It was done. Subjects seemed to have baked beans of 200 g in order to encourage the production of farts in addition to regular meals for 24 hours, the farts made were collected through the rectal catheter.

There was no difference in the amount of farts produced between males and females, meaning that they gave an average of 8 farts per 24 hours. In one time fart, 33 ml to 125 ml of farts were released and the largest farts tended to exit within 1 hour after eating. While sleeping, farts were generated, but the median of farts made when waking was 34 ml per hour, while when sleeping it was 16 ml per hour. Everyone should think "I do not want farts outside", but The Conversation says, "If you want to fart, do not forcibly endure, try to move to a safe place even if you do farts Let's say. In addition, it is said that the effect of alleviating the smell of farts is confirmed in the cushion using charcoal with deodorizing effect, so it is possible to cancel the smell of farts by using such material.