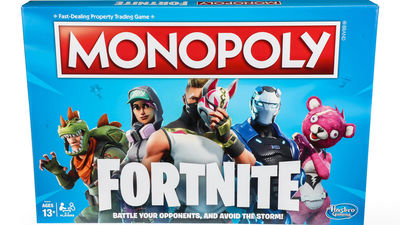 
Monopoly is a board game with a history of over 100 years, aimed at bankrupting opponents while buying real estate and railways. On the other hand, "Fort Knight" is a battle royal type online action game where 100 people fight over the last survival. "Fortnite Monoply" born in collaboration with Monopoly and "Fort Knight" does not seem to merely replace the design of Monopoly with that of Fort Knight.

The "Fortnite Monoply" frame is a drawing of the Fort Knight character, which is different from the original monopoly metal token. Also, it is also characteristic that the walls constructed with materials are placed on the trout. In addition, the field name that appears in "Fort Knight" is the land of the board as it is. On the land use card, it says that "If the opponent player stops, you must pay 1 HP to the bank", and it seems that it is possible to cut off the opponent's HP as a "toll fee" by getting the land. And weapons we use are available as cards. The following images are on the back of the "Fortnite Monoply" package. "Fortnite Monoply" decides actions such as "construction of walls", "getting a health pack", "giving damage to the opponent", etc. by using dice rolls. Each player has a "health pack" that is funded by Monopoly and reflects the battle royal mode of "Fort Knight" fighting with survival, where players who lost all their health packs drop out of the game It seems that you are finished in the system that made it. Also, "Storm Area" which appears after a certain period of time at "Fort Knight" is reproduced on the card. According to Mr. Mustard, "Fortnite Monopoly" will be released in the US on October 1st. Sales in Japan are undecided at the time of article creation.