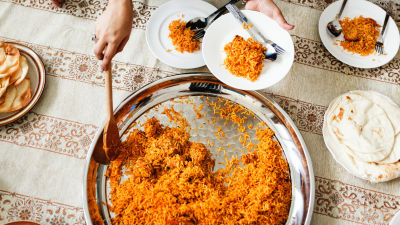 Carbohydrates that can be eaten as staple foods around the world such as rice, wheat, and potatoes are foods that contain a lot of carbohydrates. The diet method " carbohydrate restricted diet " that refrains from ingesting the carbohydrate has been drawing attention in recent years, but the research result that it is a bad method to the body has been announced.

Low carbohydrate diets are unsafe and should be avoided | EurekAlert! Science News
https://www.eurekalert.org/pub_releases/2018-08/esoc-lcd082318.php 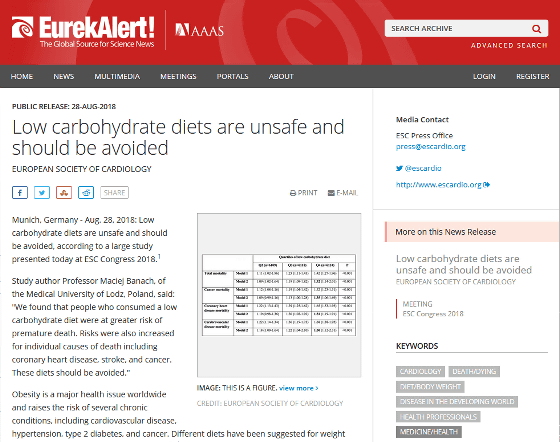 Low-Carb Diets Probably Will not Kill You, But That Does not Mean They're a Good Idea
https://www.livescience.com/63453-low-carb-diet-mortality.html

A research finding that a carbohydrate restricted diet, also called low carbohydrate diet and low sugar diet, may increase the risk of early mortality was presented at the European Cardiovascular Society held in Vienna. In this study, researchers in Poland analyzed the data of approximately 25,000 American subjects who participated in the National Health and Nutrition Survey (NHANES) conducted between 1999 and 2010, We are finding the dangers of quality restricted diets.

The NHANES survey data has been followed for 6 years, but when we analyzed this, those who are doing carbohydrate restricted diets like Atkins diet , in the 6 years after follow-up survey It has been found that the risk of death is 32% higher than those who normally eat.

In addition, when carbohydrate restricted diets were performed, the risk of suffering from heart disease and death in the follow-up period (6 years) increased 51%, the possibility of death from cerebrovascular disease increased by 50%, cancer The possibility of dying with 35% more was said. Mr. Maciej Banach, a researcher at the Uts Medical University in Poland who researched the study, compared with other research data, "The message from our research is obvious, so long-term carbohydrate restricted diet should be avoided It is a thing. " However, NHANES data used in the analysis has only a 6-year follow-up period, and since the survey data is based on self-assessment of the subject from a certain point of time, "long-term effects of carbohydrate restricted diet" Mr. Banach notes that it is not clear.

Alice Liechtenstein, a nutritionist working at the Tufts University cardiovascular and nutrition laboratory, also points out that there are some skepticism in this study. It has also been pointed out that someone with a high risk of heart disease, stroke, hypertension had already done diet restricted carbohydrates, Mr. Liechtenstein says, "Even if a connection is found, proving a causal relationship It is not ". In other words, it is unknown whether these causes are carbohydrate restricted diets, even if the risk of cardiac disease, cerebrovascular disease, cancer is increased for those who were on diet with limited carbohydrates.

In addition, Mr. Liechtenstein says that it was doubtful whether the subjects who reported that they carried out a carbohydrate restricted diet in the study were able to take the meal in the proper way, forcing the meal to become low carbohydrate I point out the possibility that I was changing. Still, Mr. Liechtenstein says "We can not recommend carbohydrate restricted diets to most people", and he says that dieting should be considered "in the long term rather than in the short term". Furthermore, as a healthy diet for many people, "I take a lot of fruit and vegetables, cereals, fish, leguminous plants, etc., with little or no carbohydrates, ingest saturated fatty acids Things that are not over "are cited.