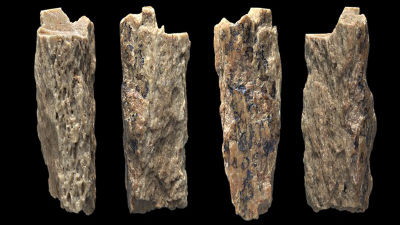 The evidence that the Neanderthal people and Denisova men who had been thought to have lived in separate places so far crossed and made a child were shown for the first time in the world. Scientists from around the world are shocked by the research results that they thought that even scientists who conducted the research were "something wrong". Offspring of Neanderthal and Denisovan identified for first time | Science | The Guardian
https://www.theguardian.com/science/2018/aug/22/offspring-of-neanderthal-and-denisovan-identified-for-first-time

Scientists Stunned By a Neanderthal Hybrid Discovered in a Siberian Cave - The Atlantic
https://www.theatlantic.com/science/archive/2018/08/a-neanderthal-and-a-denisovan-had-a-daughter/567967/

In 2008 the scientists discovered the little finger bones of the child 41,000 years ago from DNA caves in Siberia where DNA does not match both current humans and neanderthal people. Adult molars have also been discovered from the same cave, and this human being, which was regarded as "an unknown new line of human beings" is later named Denisova . Subsequent investigation showed that some of the people living in Asia and Melanesia had traces of Denisova's DNA, indicating that there was mating between the present human race and Denisova.

And new research showed that Denisova had mating with not only current human being but also Neanderthal. DNA analysis of the bone in the cave revealed that the owner of the bone had Neanderthal's mother and Denisova's father. It was the first time that I identified ancient human beings with fathers and mothers belonging to different human groups. Mr. Viviane Slon of the Max Planck Institute who announced the research was originally unable to believe the findings of this investigation and said that he thought "What was wrong?" DNA analysis of ancient human beings is very difficult, and often results in incorrect results. However, Mr. Slon reshaped the DNA six times, and repeatedly conducted the experiment, the result was the same.

Neanderthals and Denisova have lived their lives far away from the area about 400,000 years ago, but after that they coexisted around the caves of Siberia. In 2010, the bones of the toes of the Neanderthal people were discovered from the cave where the Denizoans lived. The bone, which Slon and others found, "children of Denisova and Neanderthal", showed that the two groups of human beings lived not only at "the same place" but also "at the same time". What should I call the Neanderthal and Denisova children? As for the question "Max Planck Institute's Svante Pääbo," We are avoiding the use of the word "hybrid", as commented. The word hybrids has the impression that two groups of human beings are distinct, but as I showed in this research, I explain that the boundary is actually vague.