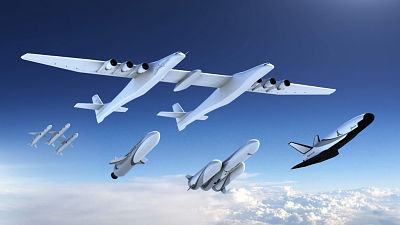 " Stratolaunch " ( Stratolaunch ) which realizes efficient rocket launch by hanging the rocket down to the center of the twin-body type airplane and launching it in the sky where the air has become thin has been planned after 2022 We announced the operational equipment to start service. 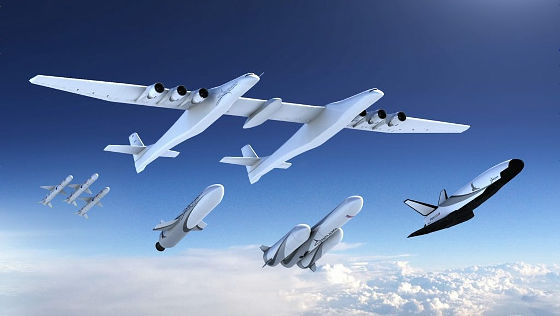 Of the four types of rockets, Pegasus is already a proven track record equipment, and the following three types were newly announced this time. The leftmost "MLV" is a rocket for placing intermediate size artificial satellites and the like on an earth orbital at an altitude of 400 km, and the launchable weight (payload) is 3400 kg. Development is proceeding with the aim of starting operations in 2022. "MLV Heavy" in the middle is an aircraft equipped with three rocket engines in three rocket bodies, for putting 6000 kg equipment heavier than MLV in orbit. And, "Space Plane" is an aircraft that can return to the ground and can be reused, equipment that can carry both cargo and astronauts to space. We are still planning to advance development from now on at the stage of design study. The characteristic of the launch system of Stratolaunch is that it is a twin-flying type airplane that lifts the rocket to the sky and then launches it in the air. To launch the rocket vertically from the stationary state on the ground requires tremendous energy and you need to load a lot of fuel for that. On the other hand, in Stratolaunch's launch method, the base unit that can efficiently fly with the wings carries the rocket to the sky beforehand and shoots the rocket from where the air resistance decreases, thereby improving the overall efficiency To do.

"Roc" which is one parent machine was released for the first time in May 2017, and it is said that it is in the stage of conducting various tests to start operation. This "monster" with six engines and around cockpit that it diverted from two used Boeing 747-400 aircraft was a "taxing test" which speeds up on the runway in February 2018 Preparation for the first flight, such as reaching 74 km / h, is under way. The first flight is scheduled around February 2019. 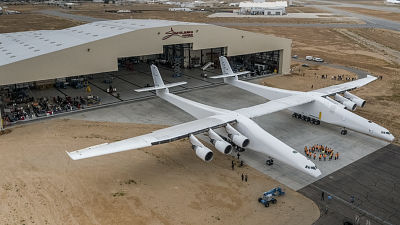