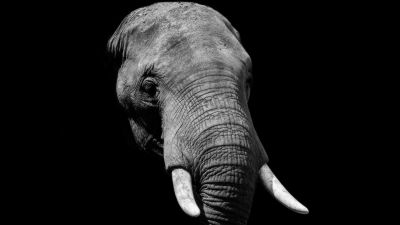 Elephants are known to be hard to become cancerous and scientists have been researching for years to unravel their mechanism. According to the latest paper by researchers at the University of Chicago, elephants have a surprising mechanism of destroying tumors by reviving the dead genes and assigning the task "kill cancer cells" Has been revealed.

A Zombie LIF Gene in Elephants Is Upregulated by TP 53 to Induce Apoptosis in Response to DNA Damage: Cell Reports
https://www.cell.com/cell-reports/fulltext/S2211-1247(18)31145-8

Elephants Hardly Ever Get Cancer, And We May Finally Know Their Secret
https://www.sciencealert.com/lif6-pseudogene-elephant-tumour-suppression-solution-petos-paradox

Studies have shown that animals tend to be more prone to cancer than small dogs , for example large dogs tend to increase the risk of developing cancer as more cells are involved. However, it is clear that comparing animals of different species does not hold the concept, there seems to be no correlation between body volume, relative lifespan and incidence of cancer. A contradictory fact that "the incidence of cancer should be higher as the number of cells is higher, there is no correlation between body volume and cancer incidence" has confused many scientists, the best example It was an elephant.

Studies published in 2015 show that cancer mortality in large elephants in the body is only 5% or less. Considering from the theory that "the greater the number of cells, the greater the risk of developing cancer", the elephant of a large body should be at a higher risk of developing cancer than a human being, but in reality it is more than the mortality rate of human cancer (11 to 25%) There are far lower numbers, and it is clear that elephants have strong resistance to cancer. In the 2015 study, elephants have a large copy of the p53 gene (TP 53) that suppresses cancer formation, which finds DNA damage and produces substances to direct cell repair and closure It was clear that it was.

Most mammals, including humans, have only two types of copies of p53 gene that have changed, but since elephants have as many as 38 kinds, they quickly find cancer and immediately It was thought that it was possible to deal with it. It is easy to see what kind of things are happening inside the body if you are using a mouse, but it is easy to understand how cancer suppression genes work in large animals like elephants There is none. Therefore, the geneticist Mr. Vincent Lynch and the research team collected tissue samples of animals such as elephants and manatees, who are supposed to have the same ancestry, and used a carcinogen substance that damages DNA cells to obtain tissue samples I am observing how it changes. As for the observation results, Mr. Lynch said "Elephant cells die as soon as the DNA is damaged, so there was no risk of cancer."

As a result of observation, the research team will focus on leukemia inhibitory factor (LIF) which can also act as an anticancer factor . As a result of examining the genes of elephants, as with the p53 gene, it becomes clear that a large number of "copy of LIF gene" exists.

Elephants have LIF 6, a "copy of LIF gene", which is normally inactive. This LIF6 has a close relationship with the p53 gene, and it seems that "p53 gene activates LIF6". Activated LIF6 acts as a cancer suppressor to induce apoptosis of cancer cells and positively cause cell death of DNA-damaged cells by carcinogenic substances, so it is possible to prevent the spread of cancer cells in the body That is why. 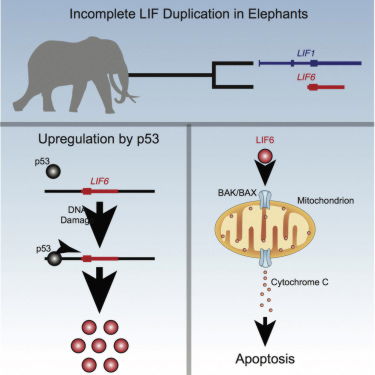 In addition, among the animals inhabiting the natural world, not only seeds close to elephants and elephants possess strong resistance to cancer, but also Meclane has its own secret .