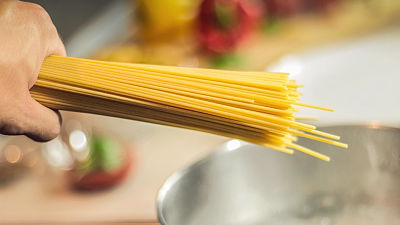 If you hold the dried noodles of spaghetti dried in ticks with both hands and try to fold it in an arch shape, there is a mysterious phenomenon that it will definitely break into three or more. A researcher who succeeded in finally overcoming the "mystery of folding spaghetti" who never escaped no matter how hard he tried, succeeded in breaking spaghetti beautifully in two appeared.

The strange phenomenon of "The spaghetti's dry noodle always breaks into three or more" is the one that the Nobel laureate scientist Richard P. Feynman found and asked the world. When you bend a long stuff like a pencil or a wooden stick, in most cases it will break in the middle from around the middle, but with regard to spaghetti it can be said that "you can never fold in two at all, no matter what you do" It was clarified. 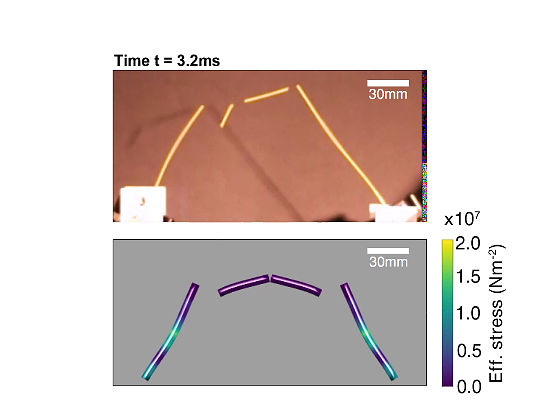 The mystery of this phenomenon "Why only spaghetti?" Was unraveled in 2005 by physicist Basil Audrey and Sebastian Neukirch of Pierre & Mary Curie University in Paris. Through repeated experiments called "catapult experiments", the waves are synthesized and strengthened when the "deflection" that occurs when the spaghetti broke first, is revealed, revealing the reality that new folds are made Then, "The crushing of a thin rod by the chain of crack - Why does not spaghetti break in half?" Was published. In the year following this announcement, Mr. Audrey and Mr. Neukirch were awarded the Ignoraw Prize in 2006.

"Why spaghetti can break into three instead of two?" Series list: Sapporinbi | Z meeting
https://www.zkai.co.jp/el/saponavi_a/bkmsk40000000cm9.html

In that paper, the cause of "Spaghetti is surely broken down to three or more" was elucidated, but in the contrary, scientists who worked on the mystery of "There is no way to fold in two" appeared. It is a team of Ronald Heizer, a graduate student at Cornell University and Bishar Pattil, a graduate student at the Massachusetts Institute of Technology (MIT).

Two people who thought from "everyday conversation" that there is a way to have spaghetti in two ", first verify their breakage by bending spaghetti by hand in various ways. After that, by developing a special "folding machine", I came to investigate how to break more spaghetti. And as a result of the research, the answer that the two arrived was a conclusion that " you can fold into spaghetti if you bend it while twisting spaghetti above a certain angle ".

In the next two movies, you can see how the break is changing at the level of twist. Both sets of spaghetti with a length of 10 inches (about 25 cm) are set in the machine, turning one side and bending spaghetti with both ends twisted at an angle of 100 degrees, it breaks into four like the following movie I have gone. (Click the image to play the movie in a separate window) 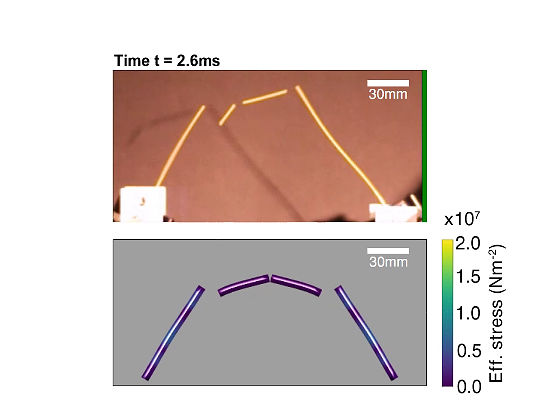 And this time it was bent with the angle of twisting at 330 degrees. It can be confirmed that spaghetti has broken in a moment and "deflection" is occurring, but this is broken into two without finely dividing it. 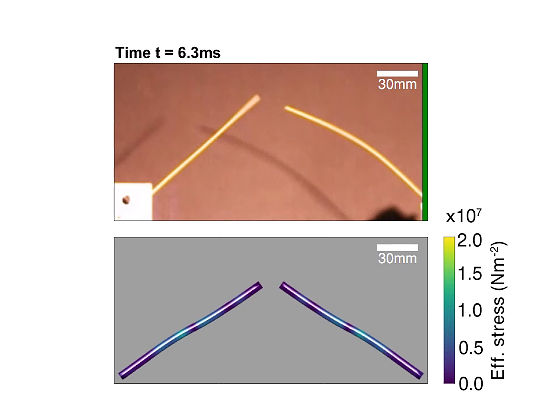 The research team has also succeeded in elucidating this phenomenon mathematically. As mentioned above, the reason why normal pasta breaks into three or more is that the "deflection" waves when the force of "strain" that was hanging on the curved spaghetti is released and is going to return straight Although the force became bigger, it could be a new crease there, but even in spaghetti with "twisting" there is "distortion" the same. However, by adding the force of "twisting" there is said that the behavior when spaghetti attempts to return to its original state changes.

The results of this research that seems to be as good as the "2006 Ignor prize candidate", but the results of this research, the two researchers were able to understand "to raise the understanding of crack formation, multifilamentary structure, artificial Controlling the fracture of other rod-like materials such as nanotubes, or microtubules of cells ", it says that there are uses beyond mere culinary curiosity.

In addition, the study considered in this research is "long pasta with a perfect circle", wide pasta such as "Tagliatelle" and "Fettucine", hollow "macaroni" and "penne" are not relevant is.