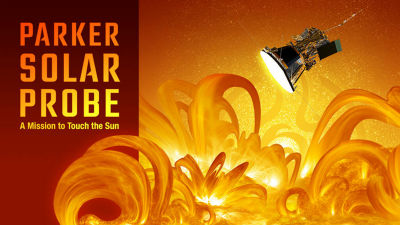 Successful launch of the space probe " Parker Solar Probe " made to elucidate the mysteries such as the high temperature gas "Corona" surrounding the sun and the particle " Solar wind " blowing out at high speed. This probe will approach the sun with an unusual route that goes from the earth to the inside of the solar system, and we are planning to observe it for about seven years.

Parker solar probe was launched from Cape Canaveral Air Force Base in Florida, southern USA, at 3:31 am on August 12, 2018 in the US time. Parker solar probe launched on delta IV heavy rocket manufactured by United Launch Alliance finishes combustion of two booster rocket engines about 4 minutes after launch and separates. Next, after cutting off the first stage "Core Booster", it ignited the engine of the second stage rocket and continued to accelerate and rise further. After separating the fairing covering the tip of the rocket, it succeeded in separating the second stage rocket, and after completing the combustion of the third stage rocket, the Parker solar probe is detached from the rocket and a long journey aiming at the sun I caught up.


Parker solar probe takes the desired orbital orbit by repeating the swing by using Venus seven times and approaches the sun to the radius of about 8.5 (about 8.5 solar radius ) of the sun at the shortest. "About 8.5 solar radius" is about 6 million km, which corresponds to the distance of about 460 Earths. Although it seems a tremendous distance, if we reconstruct this as an astronomical unit, it means "about 0.04 astronomical unit", that is, " it approaches 4% of the average distance between the sun and the earth ". 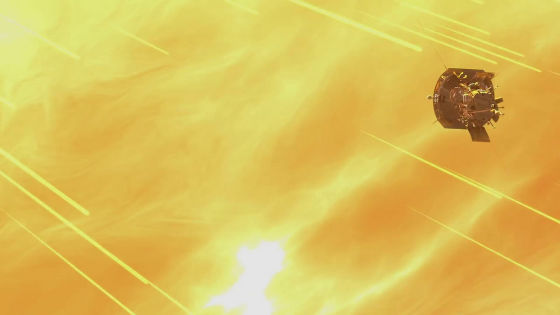 Until now, the distance when the object made by mankind comes closest to the sun was 43 million km that the explorator Helios 2 launched in 1976 reached, "Parker solar probe said I approached the distance of about one seventh. The speed at that time is about 430,000 mph (692,000 km) per hour, reaching "200 km per second" as well. It is said to be 15 times faster than bullets launched from general guns and is believed to be the highest speed recorded by human beings.

NASA aims at Parker Solar Probe aims to elucidate the mystery that the air layer "Corona" surrounding the sun will be hotter than the sun itself. The surface temperature of the sun is as high as 6000 ° C, but it is known that the corona existing above the solar system extends to an extremely high temperature of 1 million degrees. The Parker solar probe literally jumps into this corona, and in addition to its actual appearance, it is supposed to observe the solar wind and the magnetosphere of the sun. 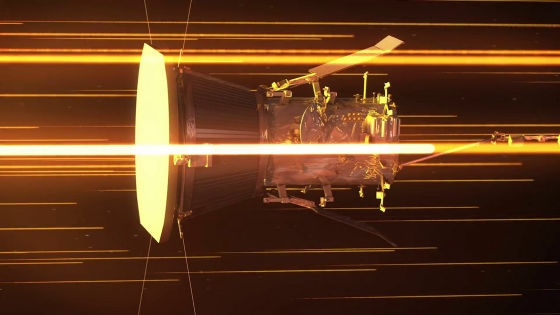 Parker solar probes approaching very close to the sun will be exposed to sunlight that is 520 times stronger than the surface of the Earth and the fuselage will be exposed to extremely high temperatures. Therefore, the Aircraft has a "shield" with a thickness of 11 cm with a special heat insulation mechanism using carbon fiber, and by autonomously controlling the posture of the aircraft, it protects itself from the harsh solar thermal energy. At that time the surface temperature of the shield will be 1400 degrees, but the temperature of the airframe itself will be kept around 30 degrees. You can see more details by reading the following article.

Why are the probes that are too close to the sun to melt with heat? - GIGAZINE 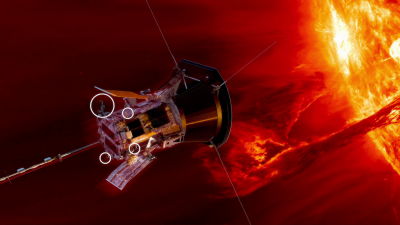 Also, the Parker Solar probe is an aircraft with an unusual flight route "flying toward the inside of the solar system". The following movie explains what kind of difference it has.

NASA | Parker Solar Probe: It's Surprisingly Hard to Go to the Sun - YouTube


A special way of thinking is needed to deliver a spacecraft from the earth toward the inside of the solar system. It is not as easy as saying "You should approach by using the gravitational force of the sun", but you need to overcome phenomena based on the laws of physics. 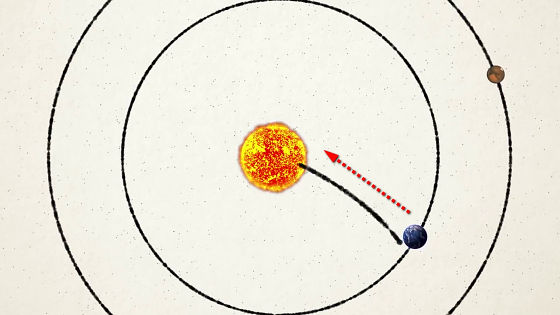 Because the earth is traveling around the sun at 67,000 miles per hour (about 110,000 km / h), there is a large inertial force in the substance that exists on the earth. 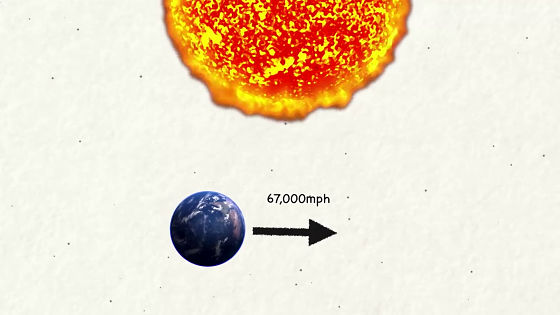 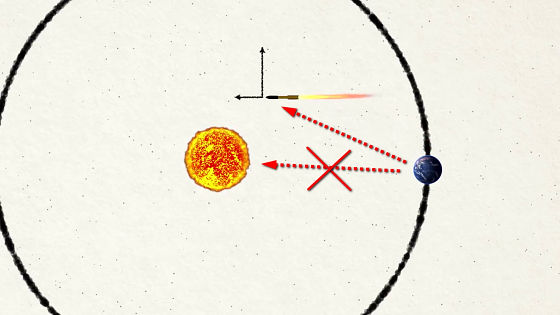 In order to cancel this inertial force, it is only necessary to accelerate the rocket in the direction opposite to the direction the Earth revolves to offset the speed, but this is not easy. 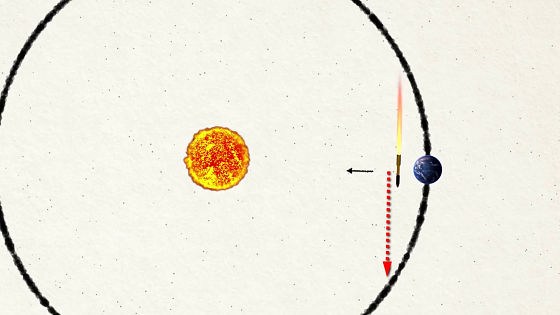 That's why it is extremely difficult to accelerate the rocket to the speed of "67,000 miles per hour". The speed that the Saturn V type rocket, "the largest rocket of mankind" used in the Apollo project, is 25,000 miles per hour (approximately 40,000 km per hour). 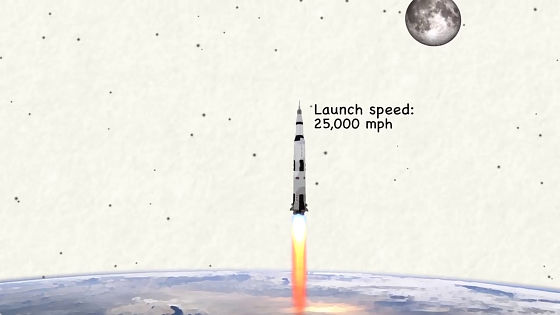 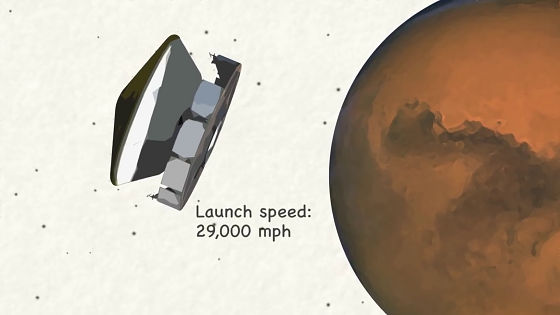 Furthermore, even in the explorer New Horizons aiming for Pluto, the speed is 36,000 miles per hour (about 58,000 km per hour). In other words, in order to cancel the inertial force of the earth, it is necessary to strike a rocket at nearly twice the speed so far, which is extremely difficult. 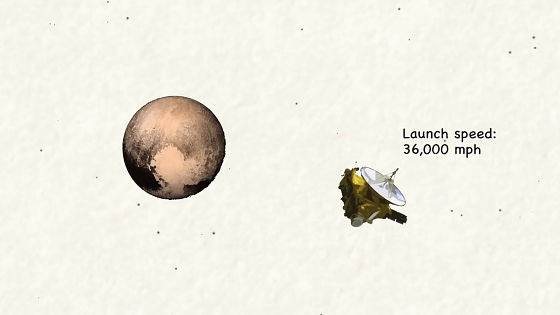 Therefore, what NASA adopted is a method of adjusting the speed of the airframe well by placing "gravity swingby" using the gravitational attraction of the astronomical object and placing the spacecraft in the desired orbit. The Parker solar probe is planned to be put in a long circular orbit that circles the sun by repeating the swing by using Earth and Venus seven times. 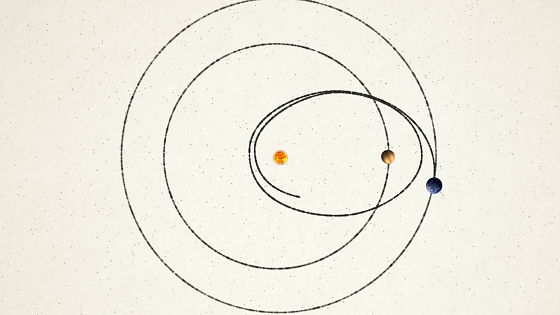 The Parker solar probe has a budget of 1.5 billion dollars (about 170 billion yen) spent on development. In the future, in November 2018, it will be put into the planned orbit and the observation that is going to be carried out for the next seven years will be carried out. Andy Drysman, director of the plan and at Johns Hopkins University commented, "Today's launch is a 60-year research achievement."