Apple has released a new software update to address the exhaust heat bug in the 2018 model MacBook Pro. When an exhaust heat bug occurred, it was pointed out that MacBook Pro was a terminal with the problem "CPU's original performance can not be drawn out" due to the fact that the clock frequency of the CPU installed in the MacBook Pro drops.

The new MacBook Pro announced on July 12, 2018 is equipped with Core i7 which is Intel's 8 th generation core processor as standard, and it can be loaded with Core i 9 if it is specially upgraded. Since MacBook Pro of the high end model of MacBook can be equipped with Core i 9 of 2.9 GHz base clock, it seemed to be a terminal that can comfortably perform tasks that require machine power such as video editing software. However, users who purchased the 2018 model MacBook Pro immediately pointed out that "MacBook Pro can not draw out the original performance of the CPU because there is a problem with the internal heat exhaust structure," which was a big topic. 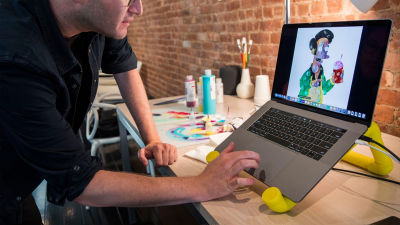 Apple seems to have recognized that the 2018 model MacBook Pro has problems with waste heat and apologizes as "we apologize to customers who are not able to demonstrate optimal performance with the new system" At the same time, we released a software update for correction.

The bug seems to affect all the MacBook Pro of the 2018 model, not limited to the display size and installed CPU, but it does not affect other MacBooks. According to Apple, because there was no "digital key" that affects the thermal management system on the firmware, there was a phenomenon that the CPU automatically lowered the clock speed when a thermal load was applied. Bug fixes are included in the complementary update of macOS High Sierra 10.13.6, so you can expect to get up to 70% on 15-inch MacBook Pro and up to 2 times faster operating speed with 13-inch MacBook Pro with touchbar is. Furthermore, I do not reveal details about "digital key" that Apple was missing.

Apple argues that the exhaust heat problem was a phenomenon that I have not seen in my own tests. According to the overseas media The Verge confirmed, Apple answered that this CPU bug could not be discovered before release because CPU thermal tuning occurs only with a fairly special workload pattern.

A supplementary update to macOS High Sierra 10.13.6 released to address thermal problems, but there are media that benchmark how the performance of the MacBook Pro with Core i9 will be improved by applying this .

Tested: Apple's patch fixes the thermal slowdowns in the 2018 i9 MacBook Pro
https://appleinsider.com/articles/18/07/24/tested-apples-patch-fixes-the-thermal-situation-in-the-2018-i9-macbook-pro

The following benchmarks took the time taken to render the 5-minute 4K movie with the effect applied in Final Cut Pro X and Premiere Pro and the time it took to render a 4.5-minute, 1-minute RAW movie in Premiere Pro It shows time. It is obvious that the rendering speed has improved since updating (blue) and after going (green) before updating.

In addition, we conducted a benchmark test ten consecutive times using the 3D benchmark Cinebench 15, and averaged the score (the higher the numerical value, the better the performance). The average score before the fix update is "906", after updating it is "945".

Before the update update, although the clock speed of the CPU increased to 4.17 GHz at the maximum, when the chip temperature reached 100 degrees, the speed rapidly decreased and it changed between 2.33 and 2.9 GHz during the benchmark test It seems to have become. However, when applying the update, the CPU clock speed is stable at 3.5 GHz. Even if it declines, it seems it was about 3.1 GHz, so you can see clearly that the clock speed is stable compared to before updating.