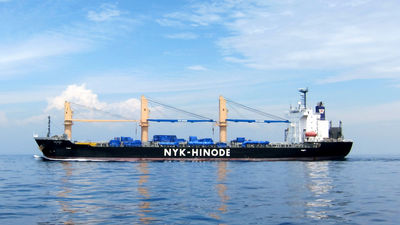 Tariffs are taxes imposed on goods passing through a border or a specific area, and as of the 21st century, it refers to border tariffs that are imposed mainly when goods exceed the border. Although the tariffs in 2018 are lower worldwide than in 1990, the prediction that "If the tariff is raised to the 1990 level, the GDP growth rate will decrease by 14% until 2060" will be covered by economic cooperation development The Organization (OECD) announced.

The Long View: Scenarios for the world economy to 2060 - OECD
http://www.oecd.org/economy/growth/scenarios-for-the-world-economy-to-2060.htm

What higher tariffs can mean for economic growth - Quartz
https://qz.com/1329031/what-higher-tariffs-could-mean-for-economic-growth/

In recent years, with the globalization of the economy, tariffs are moving in a direction to reduce tariffs, tariffs are abolished in the EU region, and countries and goods etc. not subject to tariffs by individual countries such as free trade agreements It is specified. However, immediately after the collapse of the Berlin Wall in Germany, tariffs were set much higher than in the present as of 1990, when China had not grown into an economic superpower like the present.

Although tariffs have been gradually being lowered , trade friction between the United States and China has occurred in recent years, and inequality related to trade is largely stated. While claiming to raise tariffs considerably to eliminate inequality arising in trade with other countries, the OECD stated that "If the tariff rate has been lowered to the 1990 level, what kind of situation Does it occur? "Simulation was carried out. 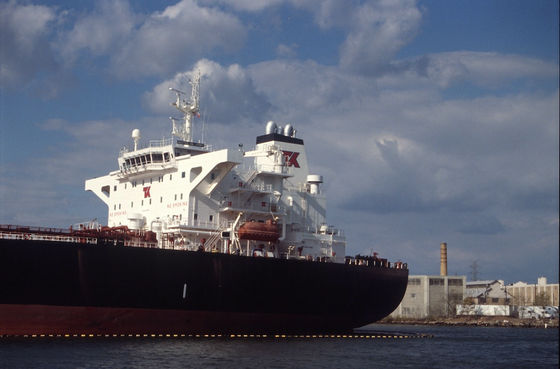 Simulation is not an unrealistic assumption that the tariff rate will rise to the level of 1990 at once but it was verified on the assumption that the tariff rate gradually increased from 2020 to 2030. In addition, it does not consider uncertainty such as geopolitical risk or the willingness of investors. As a result, if tariffs stay at the level of 2018, it was thought that world GDP will doubled from 2020 to 2060, but if the tariff returns to the 1990 level, the growth rate of GDP will be It was forecasted to drop by 14%.

The rise in the tariff rate does not mean that the transportation cost of goods will be the same level as in 1990 as it is. Compared to 1990, the cost of transporting goods in 2015 has decreased by 25%. Therefore, OECD believes that global trade will not develop to the point that it will suffer a major blow at a stroke, and the damage will be stopped with a 14% reduction in GDP growth rate somehow.

Three countries, India, Australia and China, are predicted to suffer particularly great damage due to the rise in tariff rates. In India and China, the tariff rate will rise, and trade earnings are expected to decrease. Australia predicts that GDP will decline as the export volume of resources decreases in a way that is affected by the economic recession of China, the most important trading country. In addition, under China, Korea, Indonesia, Brazil and Japan continued, and Japan was forecasted to decrease GDP growth rate by 7.6%. 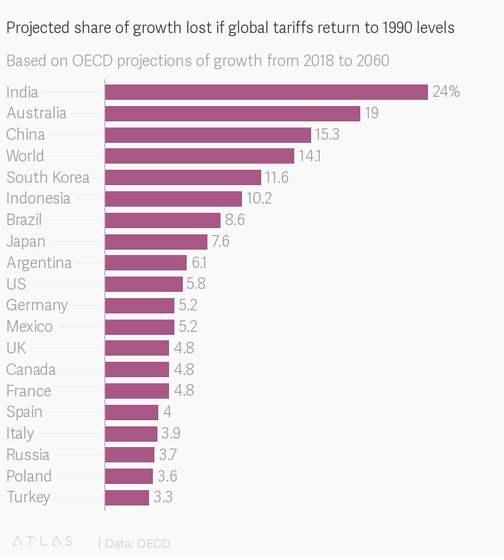 Naturally, as in this assumption, there is almost no possibility that the tariff rate will rise to the 1990 level worldwide. Even if the trade war between the United States and China intensifies and even if the US drastically raises the tariff rate on goods imported from China it is hard to think that it would raise other countries to the same level as the US. Even if the relationship between China and the United States deteriorates, China can conclude agreements with the EU and other countries and discuss tariffs on lowering tariffs on specific goods.

On the other hand, according to the OECD, the greatest benefit arising from low tariffs is not the profit directly generated by trade in goods, but the transfer of knowledge as trade increases. For example, in Bangladesh, which has achieved economic growth in recent years, the fact that Bangladeshi who engaged in trade in clothing with Korea learned know-how and started to manufacture clothing is considered to be a major factor.