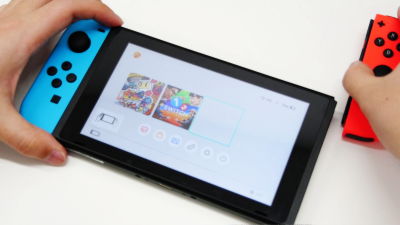 Nintendo's latest game console · Nintendo Switch has revealed that hacker system analysis has advanced to a considerable level. Furthermore, it is also known that the existing Nintendo Switch has a vulnerability that can not be patched, and I was worried that pirated software and others would be flooded in the near future, but Ars of foreign news media Technica introduces the "perfect online detection method" adopted by Nintendo Switch and you can see the security of stone stones.

It was reported in January 2018 that the system analysis of Nintendo Switch reached a considerable level. By using some vulnerabilities existing on firmware etc, hackers had revealed complicated ways of accessing the Nintendo Switch at the kernel level and obtaining terminal control almost completely. All existing Nintendo switches have a patch unmodifiable vulnerability - GIGAZINE 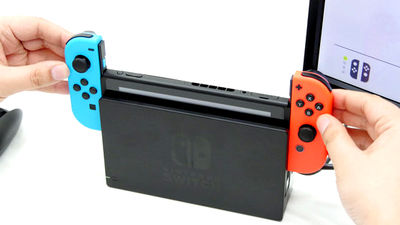 "All existing Nintendo switches can be hacked" was concerned that overwhelming pirated copies of copyrighted games on Nintendo Switch would be flooded. However, according to Mr. Michael, a hacker who has hacked Nintendo's system, the Nintendo Switch adopts a system that detects on-line detection of playing pirated games, and the detected terminal is permanently stored in Nintendo It will be impossible to connect to the network . The Nintendo network is a generic term for network services provided by Nintendo, so if you are connecting to the Internet and playing games, you will use this Nintendo network, so pirated games that require online connection can be played with the Nintendo Switch It will not be said.

According to Michael , Nintendo seems to request "encrypted client certificate" stored in "TrustZone" core when Nintendo Switch connects to the Nintendo network. Since this certificate is used to identify specific hardware when logging in to Nintendo's server, the terminal that Nintendo deems inappropriate will not be able to connect to the network forever. Similarly, Nintendo made it impossible to use the online function of a terminal that uses pirated edition in Nintendo 3DS, but in the system installed in Nintendo Switch, it is different in that "terminal is identified and connection is prohibited" It is said that it is more strict than the system of Nintendo 3DS. 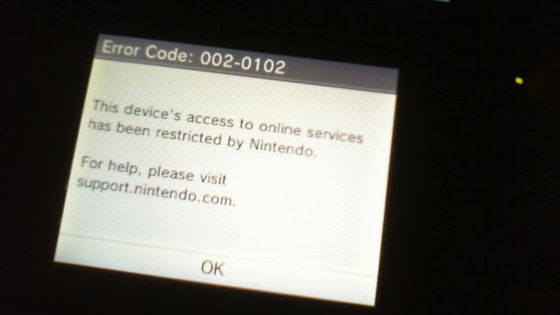 And how does Nintendo distinguish whether the game played on the Nintendo Switch is formal or pirate? If you say that the game is legal from the "certificate" assigned to each game when connecting online It seems to confirm what it is. In the case of a physical game card, each game card is assigned a unique " RSA - 2048 " signature character string written in the factory, which is a "certificate" that distinguishes whether this is a genuine purchase game . In the case of the download version, it seems that unique information created by combining "unique Device ID of console" and "Nintendo account information used at purchase" becomes "certificate". By cryptographically attaching copies of the downloaded game to the system, it prevents illegal copying (pirated).

With these two methods Nintendo detects pirated games, it is possible to identify "terminals playing pirated games" in the above-mentioned way, and to quickly detach the target from the network.

The following image is a message displayed on the Nintendo Switch when "a terminal playing a pirated game" is detected. 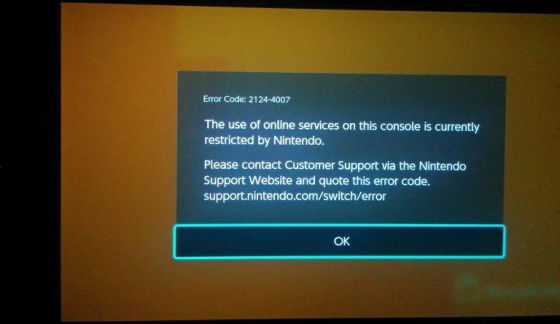 We can not detect malicious terminals playing offline pirated games in this online detection process. However, according to Michael, the system firmware can theoretically detect pirated games played offline, and it is also possible to prohibit the connection the next time the player connects online.

Although it was found that vulnerabilities existed in all existing Nintendo switches, Ars Technica wrote that "Nintendo had prepared the best method" to prevent unauthorized modification and pirated game play. It is.