Learning from indigenous peoples of Guatemala "How will children help them with housework"? When closely tied to the lives of indigenous peoples of neighboring Guatemala in neighboring country of Mexico, you can see that children tend to take the initiative in helping housework. Why are these children voluntarily helping with housework, many psychologists are pressing for the reason.

Families In A Maya Village In Mexico May Have The Secret To Getting Kids To Do Chores: Goats and Soda: NPR
https://www.npr.org/sections/goatsandsoda/2018/06/09/616928895/how-to-get-your-kids-to-do-chores-without-resenting-it

Psychologist Suzanne Gaskins lived in a small village called Maya near the Valladolid in the Yucatan Peninsula in the early 1990s. One day when I talked with my sister who met 7 years old and 9 years old in Maya village, I talked about housework and my older sister told me, "I wash my clothes and my brother's clothes yet," my sister I heard that they talked about household chores that they usually do at home as "I wash their clothes too!"

Mr. Gaskinks noticed that many of the indigenous children of Guatemala who lives in Maya, not only those who were asked by parents, were asked to voluntarily help, not just from their parents. Apart from Mr. Gaskins, in the past 30 years several psychologists have confirmed that the indigenous peoples of Guatemala "rooted in helping children do housework" is rooted. Mr. Barbara Rogoff who is a professor of psychology at the University of Californiathe studySo we have taken up the remarks of an 8 year old girl. When this girl came home from school, he said to his mother, "Mom can do all the work done at home," he seems to have taken the initiative by taking the initiative on his own initiative.

The behavior of children who can take this volunteer is also common in Mexico as there is the word "acomedido". Andrew Corpans of the University of New Hampshire said that '' acomedido '' has the meaning of taking the initiative in response to the situation and is a little different from what it is to help with being told to help a bit. A 12 - year - old girl named Susie who actually lives in maya performs spontaneous housework to help her mother, and she is going to do dishes and washing in addition to dishwashing. 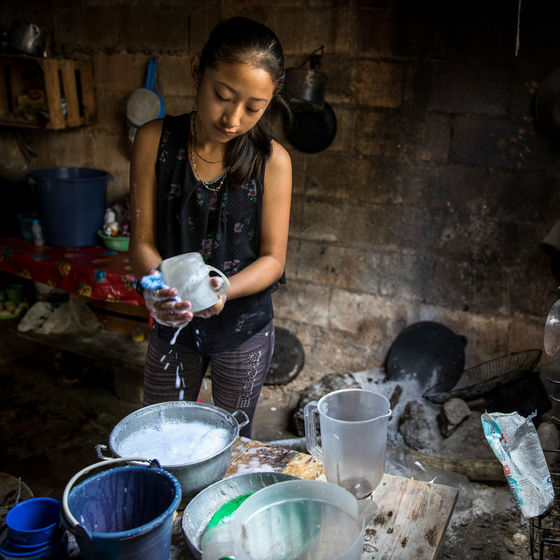 Mr. Copan interviewed the indigenous peoples of Guatemala who moved to the United States about the frequency of child's housekeeping and compared it with the responses of the middle class American European family living in Silicon Valley. According to the survey, it was revealed that children aged 6 to 7 years of indigenous peoples of Guatemala who emigrated to the United States are engaged in house duty about twice as compared with children of European-Americans That's right.

So what is different between a typical European-American family and an indigenous family in Guatemala? Mr. Rebecca Megia Arauz, psychologist at Western Western University of Technology and Higher Education University (ITESO) said: "In a typical European-American family," children are clumsy and involved in domestic chores because they are often clumsy It tends to refuse "to point out."

However, in indigenous families of Guatemala, parents do housework in front of children in absolutely opposite sense. And if children say "I want to do the same thing", even if they have to reexecute what the child did afterwards, they will respect the independence of children and engage in domestic affairs. For example, a mother says, "My son made a mistake to flood the water when I cooked, but since I learn from mistakes, I still have my son participating in making cooks" Mr. Mehia Arauz explains that parents seem to think that children's failures are "investing in the future".

Mr. Copan cites an example of Indigenous Peoples in Guatemala, "Giving children the opportunity to cooperate with their parents' housework at an early stage is highly likely that children will voluntarily participate in domestic work." Mr. David Rancy at Utah State University shows four hints that children will voluntarily perform housework from the indigenous lifestyle of Guatemala.

◆ 1: Show the figure of doing housework with children
When doing many household chores, such as cooking and doing laundry, we will have children in the vicinity. Also, children can learn a certain degree of behavior from the appearance of doing housework. Because of this, when the person himself tells "I would like to do" he understands much of the content, even if he can not do everything perfectly, he says less teaching.

◆ 2: Ask a "small work" that can gain a big contribution
Children may be physically immature and may not be able to deal with dexterity. Therefore, even if giving a child a task with a high degree of difficulty, there is a high possibility of "tasting frustration due to failure" and reducing opportunities to participate in household chores. Therefore, if you leave a small chore that you do not have to do, you can not get the sense of achievement of doing housework. Therefore, even if the difficulty level is low, we need to think about asking a family member for a job with a high contribution. ◆ 3: Do one work together
For young children, what motivates them to engage in domestic work is "to tackle common goals with family members". For this reason, let's not do the work alone by the child at the beginning, and do one thing together with the child. Then gradually, children will learn their jobs and will start doing housework voluntarily.