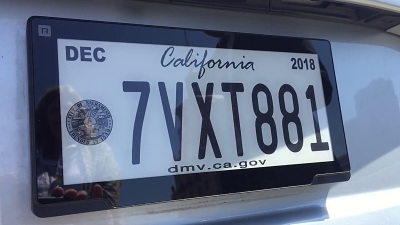 Experimental operation of "digital number plate" with electronic paper display, chip, battery built in instead of iron plate engraved with numbers and symbols like in the past started in some parts of the United States.

Digital license plates are coming to California. What exactly are they?? - The San Diego Union-Tribune
http://www.sandiegouniontribune.com/opinion/the-conversation/sd-california-digital-license-plates-20180529-htmlstory.html

California debuts 'digital' license plates. Here's what they have cost you. | The Sacramento Bee
http://www.sacbee.com/news/local/transportation/back-seat-driver/article211828814.html

The digital license plate is a device that uses the same electronic paper as a device such as Amazon's e-book reader "Kindle", and the operation experiment is started in Sacramento, California for the future introduction. You can see the actual operation in the following movie.

A digital number plate in which letters and numbers are displayed in black on the back of a white background. The style is the same as the usual license plate, the year and month indicating the expiration date of registration on the left and right of the letter of "California" at the top, and the number is displayed at the bottom at large numbers. In addition, on this screen, the city chapter of Sacramento City, as drawn on a special designed license plate, is displayed to the left of the number. By using electronic paper display, display can be changed freely. Of course, it is necessary to follow a certain style, but you can invert black and white as follows. Also, as in the bottom of the plate "Hi Tony !!!!", it is also possible to display a message for the car driver behind. Furthermore, we can respond to displaying advertisement using a part of the plate. However, with respect to the display of messages and advertisements, it is necessary to obtain the consent of the authorities in the future, and furthermore restrictions such as being limited only during the suspension are expected to be added. The merit of the digital number plate is that in addition to being able to display the above message display and advertisement display, it is also possible to click the troublesome procedure of registration of vehicles with just one click. In the United States, it is necessary to renew the registration of the vehicle every year, and it is necessary to paste the seal which is sent after troublesome renewal procedure has been completed. But with a digital license plate it will be possible to complete that work online.

The mechanism is that this plate has become a license plate "connected" to a dedicated server through a mobile line. When the content of registration is updated, it is possible to rewrite information in a moment by sending a signal from the server and to manage the display content further. However, as mentioned later, a fixed monthly fee is required for this mechanism. The advantage of the digital numberplate is also in places where tracking is possible at the time of theft. Inside the device there is a position capture function using GPS, it is possible to track the position of the vehicle and even if the license plate is removed, at least the last position can be grasped. On the other hand, privacy concerns remain persistent as to whether the authorities can grasp the position of the driver even during normal times.

This device is called "Rplate" provided by Reviver Auto. At the Detroit Motor Show in 2018Was announcedIt is technologically already in the stage of practical use. 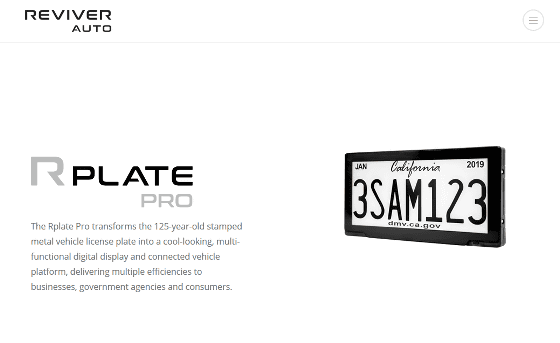 In future it will be possible to purchase this plate with a car dealer, not Sacramento city or traffic authority. It is the price that seems to be the biggest neck, the plate body needs 699 dollars (about 77,000 yen), and it is necessary to continue paying monthly seven dollars (about 770 yen) as a use fee. Although it is an interesting device, there seems to be someone who stops watching this price as well, as follows, "I was very interested, but the main priceWhenLooking at the monthly usage fee it disappeared! Some people tweet.


I was intrigued until I saw the purchase price AND the monthly cost!https://t.co/mtWZ5rAeNH


Also, "I do not think that I want a digital license plate, some people have a problem with steel plate plates?" Some people do not find a value in the first place.


https://t.co/pLf5xjFBkn
I'm not quite sure I'll ever want a digital license plate. What's wrong w / a piece of metal?


Looking at the point that "you can display advertisements and messages", some people think that "Private cars have no meaning, but they can understand if used in vehicles operated by the city."


These seem pointless for private vehicles but could make sense for a city-fleet.

"When a car is stopped, the license plate can display programmed public service messages, such as street closure notifications, an ad for a city service, an Amber Alert ..."https://t.co/MQS40JzfhL