Researchers are identified by analyzing about 700,000 genes associated with morning and night type loci There are "morning people" who can get up early in the world and work energetically from the morning, "Opinion people" that they are not good in the morning but in the evening it gets headed at night, and morning and evening There is an "intermediate man" between the two. The problem of the circadian rhythm (body clock) whether it is morning or night type is related to environmental factors such as age, gender, sunshine level, but genetic factors also affect morning and evening 1 It is said to be one.

In animal studies, it has been shown that genetic mutations and changes in gene expression related to circadian rhythms are associated with diabetes due to obesity, hyperglycemia, and beta cell dysfunction. However, although the relevance between human circadian rhythm and illness has been reported, it is possible to say, "Is not" night type human becoming obese "" rather than becoming a night type person due to obesity? " There was sexuality and the evidence of the causal relationship part was not established. Researchers are using DNA analysis service "23 and Me"Bio Bank in the UK"UK BiobankWe conducted genome-wide association analysis (GWAS) using data of 690,728 people owned by the company. As a result of GWAS, researchers announced that they identified 351 loci associated with morning persons. Note that this research is a biological preprint repositoryBioRxivIt was published inPeer reviewIt is not done.

The data that originated from GWAS includes those that answer by self-declaration whether it is morning or night, there is a possibility that it may be biased, so we monitor activities of 85,560 subjects of UK Biobank Confirmation of relationship between data and genes was taken. As a result, the top 5% of those with the most morning and related alleles had an average of 25.1 minutes earlier when moving from the active state to the resting state than the lower 5%.

The locus identified this time was the place to include circadian rhythms and insulin secretory pathways as well as genes related to the phenotype of the retina, rhomboid, hypothalamus, and pituitary gland. In addition, researchers must be in the morning style in young peoplelast childAlthough it shows the relationship between childbirth and reduction of risk of schizophrenia / depression, it has not been confirmed about the relationship with BMI · type 2 diabetes. Contents that circadian rhythms are controlled by genes have been published so far. When a substance that makes genetic mutation easily occurs in Drosophila and an observation of the change of its descendants was observed, an individual containing a gene that acts on the circadian rhythm in the X chromosome was discovered. Researchers who clarified this concrete mechanism awarded the Nobel Prize in physiology and medicine in 2017. 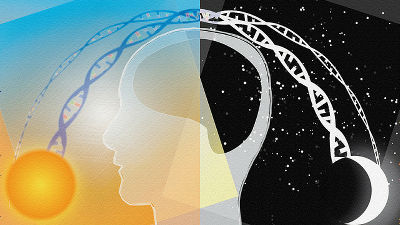