In 2019 the 40th anniversary of "Mobile Suit Gundam"The latest work of the series and announcement of the related project are done at" Gundam series new work release "from 18 o'clock Friday, April 20.

The place of presentation was "THE GUNDAM BASE TOKYO" On this day there was an entry restriction on the event space for the event. Iori · Say, Kamiki · Sekai, Yasaka · Mao life-sized figure of "Gundam Build Fighters" exhibited near "THE GUNDAM BASE TOKYO" entrance. Here is a sequel from April 2018Gundam Build DiversSince it began, it should be irrelevant to this new recital. President Yasuo Miyakawa of Sunrise will be on the stage Entitled "UC NexT 0100", a plan to draw the space century beyond 0099 will be advanced, the first of which is "Mobile Suit Gundam NT (Narrative)It was announced that it was. Detailed information on the work is posted in the following article. 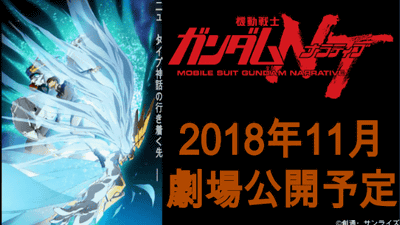 Sunrise · Naoshiro Komori Producer and Haruhito Fukui are on the stage. From Ms. Fukui, it means that the title NT will describe just like narration, and it was revealed to be "narrative" which has the meaning of "compiling / editing". Mr. Fukui stood in the Gundam series and talked about the prospect that it would be better to create a punctuation mark on the "new type myth" that was also up close up at UC. It is said that a new way of catching a new type will be drawn. One person of the protagonist group three people, Jonah Bashuta. "There were many cases that Gundam" boys ride from hints ", but this time it is a regular soldier," explains Mr. Fukui. Michelle Ruo is related to Z and ZZ "Ruo Shokai". However, there is no blood relationship with Stephanie Ruo. Rita Bernal. Three people are childhood friend of the same generation, but there is circumstance for Rita to look young. Narrative Gundam. Drawn in NT is the "phoenix hunt" strategy to search for Fennex which is "Unicorn Gundam" series Unit 3. Unicorn Gundam Unit 3 Fennex which is the subject of that "hunt". Eye witness testimony has come out from around Immediately after Mr. Minba made a speech and the Laplace's box was released, there is such a situation that the airplane hiding the "power to destroy the world" like seen in the Unicorn Gundam Narrative Gundam was developed due to bad things. In this way, works will be sent out including "NT" between "Mobile Suit Gundam F91". In the second half of the launch, Daisuke Namikawa, a deep voice actor who played the role of Alfred · Izuruha and "Mobile Suit Gundam UC" Lyddy Mercenas, etc, and Mr. Yu Hamaguchi of the entertainer joined Talk. Because this work is a stage after "Gundam UC", it is difficult for Namikawa who played Liddy at UC to play other roles, "Nara, if you are lydy," Namikawa says. However, Ms. Fukui said that this recital is "I think that this is the opportunity to meet," remarks that lidy will not appear in the future.

Actually, before this announcement, this work got banned that the abbreviation is "NT" on Twitter, that Namikawa participates in the event, Mr. NamikawaNT-1 There was a rumor that a new work was related to 0080 from the time when it was Al role in "Mobile Suit Gundam 0080" in which Alex appeared.

If Al is growing as it is, in the era of UC · NT it is late in my twenties, so even if I appeal "How is it?", This is also denied by Mr. Fukui "he will not enter the army" "Actually I did not intend to deny so far, but since guyugii will come ...", it was quite clearly told that there is no main body of Liddy.

"Mobile Suit Gundam NT" was released in November 2018 theaters. It is said that it will be deployed as a theater work rather than an event screening like "UC".