Which of the three map app confrontations 'Apple Maps, Google Maps, and Waze' can reach your destination most accurately and quickly? 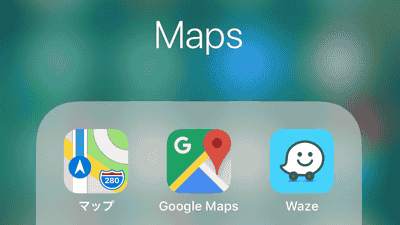 Many people say that one of the most frequently used smartphone apps is the map app. It's no exaggeration to say that traveling without a map app is no longer an indispensable part of life, and IT expert

Artur Grabowski said that Apple's genuine product. By thoroughly comparing Maps, Google Maps, and Waze, which Alphabet acquired and acquired, 'Which app shows the shortest route,' 'Which app has the least error,' and 'Which app?' 'Does the app get you to your destination the fastest?'

In conducting this confrontation, Mr. Grabowski launches one of the three apps on his smartphone when he is on the move, and collects data for comparison. Needless to say, in order to make the most accurate comparison, it is best to aim for the destination with 'Yoidon' at the same time and under the same conditions, but we do not have the resources (= personnel) to do it. Mr. Grabowski says that instead, he increases the reliability of the verification contents by increasing the number of data.

In the end, the number of data accumulated by Mr. Grabowski reached 120, and the performance difference of each application is compared by summarizing the results of using the three applications almost the same number of times. The data collected during the verification is as follows. In addition, it seems that the movement of the car is basically assumed at the time of verification. Based on the data collected in this way, Grabowski compared the three apps in the following three points.

◆ 1. Estimated elapsed time: Which app shows the shortest time route
The graph below shows the comparison of the estimated time to reach the destination at the same timing and the comparison based on Google Maps. According to this, Waze was the one who found the shortest route, showing the route that arrives 3% faster than Google Maps. On the contrary, Apple's map seems to show a route that is 8% slower, but in fact it is important to think about 'how much error was there' that will appear later in one set. 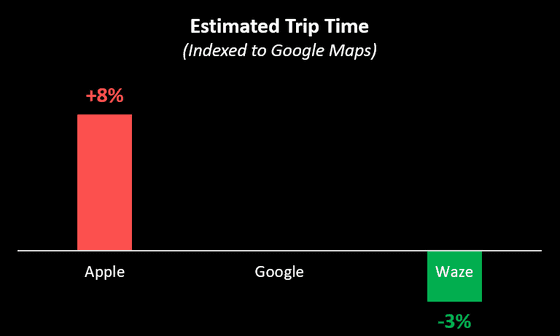 By the way, it was Waze that showed the 'finest route' that uses back roads among the three apps. In other words, it seems that Waze's idea is to reduce the required time by avoiding congestion in urban areas and making maximum use of loopholes.

◆ 2. Average error: How accurate is each app predicting time?
Regarding 'time accuracy', which can be said to be the most important in the navigation function, Grabowski calculated the error rate for each application using the formula 'actual required time ÷ estimated time -1'. Then, the one with the least error was Apple's map, and the error from the actual time was only 1%. Next to this, Google Maps has an error of 2%, but the actual time is longer than the expected time. The worst result was Waze, with an error of 11%. In other words, it means that the route estimated to take '10 minutes' actually took about 11 minutes (10 minutes + 66 seconds). 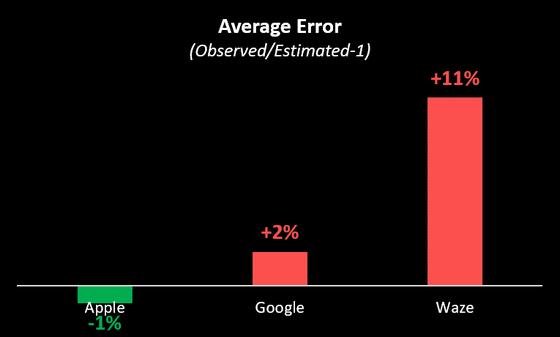 So far, Apple's map 'instead of showing the longest route, the expected time is the most correct', and Waze 'shows the fastest route, but the error is the largest'. It is becoming a relief. Grabowski puts these data together to derive the most reliable app of the three.

◆ 3. Summary: Which apps will eventually navigate the fastest and as expected?
Google Maps was the conclusion of Grabowski as 'an app that navigates with the least error' by combining the ability to find the shortest route and the actual time taken. The deviations of other apps based on Google Maps are as shown in the graph below, showing that Apple's map took + 5% and Waze took + 6%. 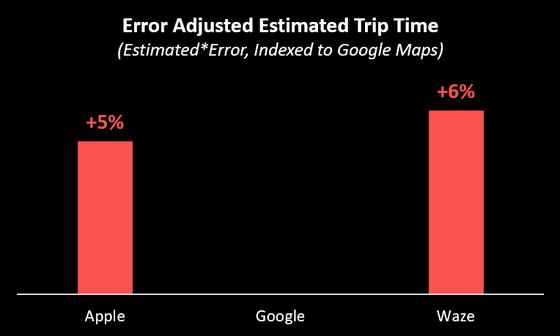 However, it should be noted that this result is not completely accurate as shown in '◆ 2', and it is evaluated as 'the most usable app' when comparing the three. Based on this result, Grabowski states the following three points.

・ If you want to get to your destination the fastest, use ' Google Maps '
・ If you want to know the most accurate estimated arrival time, click ' Apple Maps '.
・ If you use a loophole to avoid congestion even a little, ' Waze '

The breakdown of the data acquired this time is as follows.

・ All routes were acquired in the San Francisco Bay Area
・ The number of data acquisitions was 120, and a random number generator was used when selecting the app.
-Apple Maps: 41 times
-Google Maps: 41 times
-Waze: 38 times

·operating time
-Average: 26 minutes
-Minimum: 8 minutes
-Max: 1 hour 15 minutes
* To check if a short route would distort the results, we reproduced the above analysis with only '20 minutes or more' data and found consistent results.