Next to the moon and Mars NASA plans to aim for "Centaurus Alpha Star System" that is 4.4 light years away from Earth in 2069 It is on December 12, 2017 that the United States will resume its plans to send mankind to the moon for the first time in about 40 yearsWas reportedAlthough it is only NASA, it is in the center of a star system that is about 4.4 light years away from the stars of the further universe, the earthCentaurus seat Alpha star systemIt is a policy to aim for 2069 in the future.

Do Aliens Live at Alpha Centauri? NASA Wants to Send a Mission in 2069 to Find Out
http://www.newsweek.com/alien-life-alpha-centauri-nasa-wants-find-out-super-fast-2069-mission-752528

According to the new policy announced by NASA, we will launch a spacecraft aiming for Centaurus Alpha star system in 2069, which will be 100 years after 1969 when the human race first arrived in the moon by the Apollo program. Although it is a spacecraft, in reality it does not have a hull such as a human being rides on, it has a size of a few meters square and has a thickness as thin as several atoms and a camera of several millimeters in its center And observation equipment equipped with observation instruments such as sensors, aiming for distant stars by launching hundreds of this equipment at a time with a rocket and releasing it in outer space.

Centaurus The alpha star system is a triplet binary consisting of two stars identical to the sun, "Centaurus α star A", "centaurus α star B" and one red dwarf "Proxima Centauri", and Proxima Centauri Since the planet "Proxima · Centauri b" that revolves in the habitable zone was discovered, the possibility that life can exist as well as the earth is considered. And NASA's announcement to conduct detailed investigation of this celestial object is this policy to launch a spacecraft in 2069. 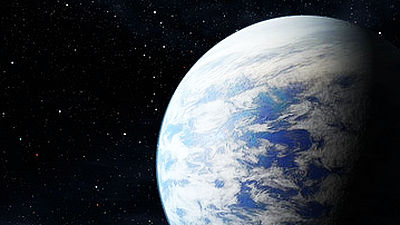 As mentioned above, the spacecraft has become a super lightweight aircraft with a very thin membrane, and it does not have a mechanism that produces propulsion force by itself. Instead, NASA is using the technology to irradiate a powerful laser beam to the aircraft launched into space, and to accelerate the aircraft using that energy. This mechanism is already "Breakthrough · Star shot conceptIt is similar to what was announced as a mechanism to generate thrust by irradiating the explorer with accurate laser beam of 100 gigawatt class from the ground. The probe which received a powerful laser beam is accelerated to about 10% of the light speed at the maximum, aiming at a far distant star. Given that the distance to the final destination, Proxima · Centauri, is 4.4 light years, the observation aircraft sent out in this way will reach the destination in about 44 years. It has been launched in 1977 that the human race has reached the space that is far from the earth with the spacecraft launched so farVoyager 1It is known that we had escaped from the solar area and reached the interstellar space around August 25, 2012. After that Voyager 1 continues to fly at 10,737 meters per second (61,333 kilometers per second), and it is located in a very far place that it takes 17 hours or more for radio waves from the earth to reach.

Although it is such a Voyager 1, its flight speed can reach only 1% of 1% of light speed, that is, about 1 / 10,000th of light speed. NASA's new policy and "breakthrough and star shot initiative" make it possible to accelerate the object to a tremendous speed to such a large extent, but by adding the power of the laser beam to the super lightweight aircraft, it becomes 10% That is why we aim to reach it.

By the way, it is only in 2113 that the spacecraft launched in 2069 reaches Proxima Centauri, and further observation data comes back to the earth from around there in around 2117 around 4.4 years. In other words, if everything goes well, the observational data of distant objects will come back in just 100 years after this article was posted.