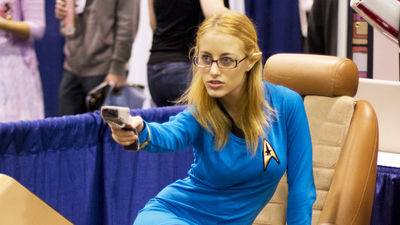 Content created secondarily by people other than the creators of existing works, such as fans, using the characters and worldviews of existing works is called ' derivative work'. There are magazines and derivative videos. The 'Star Trek' series has always emphasized interaction with fans, and there have been places where they have tolerated secondary creations made by fans, but suddenly '10 secondary creations' 'Rules' have been established.

The '10 Guidelines for Derivative Work' published by CBS, a Star Trek-owned broadcaster, and Paramount Pictures, a movie company, are as follows:

◆ 01: Derivative work is 15 minutes or less in length, or up to 2 episodes, totaling 30 minutes or less, and consists of a story that the creator originally thought of.

◆ 02: Do not use 'Star Trek' in the title of derivative works. However, it is permitted to use 'A STAR TREK FAN PRODUCTION' as a subtitle. Also, the word 'official' is prohibited from being included in titles and subtitles.

◆ 03: The content of the derivative work is original, and it is prohibited to duplicate or recreate the story of the official work.

◆ 04: When using Star Trek goods in the work, only official goods are permitted, and the use of any replicas is not permitted.

◆ 05: Derivative works should be created by real fans, and the creators and cast of the works must be amateurs. It is forbidden for anyone who has appeared in or related to Star Trek's past works to be involved in derivative works.

◆ 07: Derivative works must be content that can be seen by family members and must not violate general morals. Use of profane language, obscenity, pornography, narcotics, alcohol, tobacco, etc. that are harmful to your health or violate the law are prohibited. In addition, inappropriate acts such as violent depictions, fraudulent acts, defamation, slander, explicit sexual depictions, intimidation, and hate acts cannot be included. Derivative works must not infringe on personal privacy or rights

◆ 08: Write a defined sentence on the credit that properly indicates that the derivative work is a derivative work. In addition, it is necessary to write the specified text in any promotional material.

◆ 09: Creators of derivative works must not register works or elements of works under copyright or trademark law.

◆ 10: Derivative work does not mean the relationship with CBS and Paramount Pictures or the consent of the company.

The 'Star Trek' series, which began broadcasting in 1966, emphasizes communication with fans, and although there were no problems with the creators regarding derivative video works, entertainment-related According to The Mary Sue , who deals with the news, it is said that the production company called Axanar Productions has a lot to do with the establishment of the guidelines for secondary creation this time.

Prelude to Axanar is published on YouTube and can be watched from the following movies.


Prelude to Axanar is much higher quality than other derivative works and has been well received by Star Trek fans, so Axanar Productions launched a production project for the feature film 'Star Trek: Axanar' on Kickstarter and Indiegogo . Succeeded in raising a total of about 1.2 million dollars (about 120 million yen) by soliciting investment. CBS and Paramount Pictures, which have Star Trek rights, didn't like this.

CBS and Paramount Pictures are unauthorized works by Axanar Productions and use many elements that should be copyrighted, such as Star Trek settings, people, and races. On December 30, 2015, we filed a proceeding against Axanar Productions seeking damages and discontinuing publication and production.

The plaintiff's CBS and Paramount Pictures lawyers have sent documents summarizing the elements of Star Trek that Axanar Productions infringes, such as the pointed ears of the Vulcans and the fictional Klingon language spoken by the Klingons. The dispute was bogged down, with Axanar Productions pointing out that the Star Trek elements claimed by CBS and Paramount Pictures were not subject to copyright protection and filing a petition for dismissal.

However, at the Star Trek event held on May 20, JJ Abrams, who is in charge of the production of the movie 'Star Trek Beyond' to be released in the United States in July 2016, said that the lawsuit is appropriate for fans. Instead of a blunt response, he came to the conclusion that the secondary creation and Star Trek should not be in conflict, and Star Trek Beyond director Justin Lin has asked CBS and Paramount Pictures to withdraw the case. Revealed.

You can see what JJ Abrams is saying about the proceedings in the movie below.


The dispute between Axanar Productions, CBS and Paramount Pictures is moving toward a settlement, but it is generally expected that the proceedings will lead to the establishment of Star Trek's derivative work guidelines. In addition, although the trailer of the feature film Star Trek: Axanar has been released, there is a possibility that it will touch the guideline such as 'secondary creation work is 15 minutes or less, or maximum 2 episodes total 30 minutes or less' because it is a feature film. Yes, it is unknown at the moment of writing the article whether it will actually be published.